Hong Kong is one of the most extreme examples of big finance, neoliberal capitalism in the world. As a result, many people in Hong Kong are suffering from great economic insecurity in a city with 93 billionaires, second-most of any city.

Hong Kong is suffering the effects of being colonized by Britain for more than 150 years following the Opium Wars. The British put in place a capitalist economic system and Hong Kong has had no history of self-rule. When Britain left, it negotiated an agreement that prevents China from changing Hong Kong's political and economic systems for 50 years by making Hong Kong a Special Administrative Region (SAR).

China cannot solve the suffering of the people of Hong Kong. This "One Country, Two Systems" approach means the extreme capitalism of Hong Kong exists alongside, but separate from, China's socialized system. Hong Kong has an unusual political system. For example, half the seats in the legislature are required to represent business interests meaning corporate interests vote on legislation.

Hong Kong is a center for big finance and also a center of financial crimes. Between 2013 and 2017, the number of suspicious transactions reported to law enforcement agencies rocketed from 32,907 to 92,115. There has been a small number of prosecutions, which dropped from a high of 167 in 2014 to 103 in 2017. Convictions dropped to only one person sentenced to more than six years behind bars in 2017.

The problem is neither the extradition bill that was used to ignite protests nor China, the problems are Hong Kong's economy and governance.

The stated cause of the recent protests is an extradition bill proposed because there is no legal way to prevent criminals from escaping charges when they flee to Hong Kong. The bill was proposed by the Hong Kong government in February 2019 to establish a mechanism to transfer fugitives in Hong Kong to Taiwan, Macau or Mainland China.

Extradition laws are a legal norm between countries and within countries (e.g. between states), and since Hong Kong is part of China, it is pretty basic. In fact, in 1998, a pro-democracy legislator, Martin Lee, proposed a law similar to the one he now opposes to ensure a person is prosecuted and tried at the place of the offense.

The push for the bill came in 2018 when a Hong Kong resident Chan Tong-kai allegedly killed his pregnant girlfriend, Poon Hiu-wing, in Taiwan, then returned to Hong Kong. Chan admitted he killed Poon to Hong Kong police, but the police were unable to charge him for murder or extradite him to Taiwan because no agreement was in place.

The proposed law covered 46 types of crimes that are recognized as serious offenses across the globe. These include murder, rape, and sexual offenses, assaults, kidnapping, immigration violations, and drug offenses as well as property offenses like robbery, burglary and arson and other traditional criminal offenses. It also included business and financial crimes. 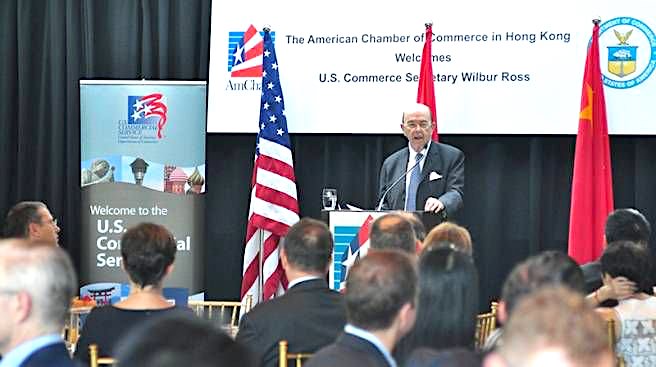 Months before the street protests, the business community expressed opposition to the law. Hong Kong's two pro-business parties urged the government to exempt white-collar crimes from the list of offenses covered by any future extradition agreement. There was escalating pressure from the city's business heavyweights. The American Chamber of Commerce, AmCham, a 50-year-old organization that represents over 1,200 U.S. companies doing business in Hong Kong, opposed the proposal.

AmCham said it would damage the city's reputation: "Any change in extradition arrangements that substantially expands the possibility of arrest and rendition ... of international business executives residing in or transiting through Hong Kong as a result of allegations of economic crime made by the mainland government ... would undermine perceptions of Hong Kong as a safe and secure haven for international business operations."

Kevin Zeese is co-chair of Come Home America, www.ComeHomeAmerica.US which seeks to end U.S. militarism and empire. He is also co-director of Its Our Economy, www.ItsOurEconomy.US which seeks to democratize the economy and give people greater (more...)
Related Topic(s): Capitalism; China; Economic; Extradition; Global Capitalism; Hong Kong; Neo-liberal; Power, Add Tags
Add to My Group(s)
Go To Commenting
The views expressed herein are the sole responsibility of the author and do not necessarily reflect those of this website or its editors.