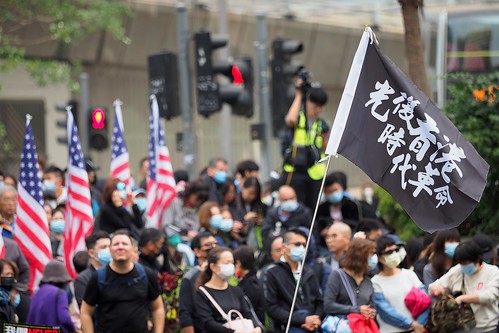 For several months, Western mass media called the Hong Kong rioters, "pro-democracy protesters". It still does. But I began noticing a new, even deadlier terminology. Now, the black-clad ninja-looking men and women that are periodically and violently clashing with the law enforcement forces are once in a while described as "pro-independence".

Some Hong Kong citizens are defining the rioters, who recently celebrated the Americans' "Mother's Day" with further protests and aggressive actions, as a "political virus".

Now many people living in Hong Kong are calling for the use of force against the predominantly young, badly-informed and poorly educated individuals - those who have been responsible, together with the novel coronavirus, for bringing their city to its knees.

It has become obvious that the soft, reconciliatory approach which has so far been adopted by both the Beijing and Hong Kong administrations, might not be able to stop the conflict between the State and the rioters, who are clearly being financed and ideologically outfitted from abroad.

The more reasonable China is, the more aggressive the actions and threats coming from Washington and its allies are. COVID-19, the situation in Hong Kong, international trade, Taiwan and the South China Sea; all gets thrown into a huge, filthy wok, and stir-fried until it becomes a tasteless, foul smelling mess, which is then thrown straight into Beijing's face, endangering the global peace, prosperity and well-being.

"Beijing has lashed out at US legislation which seeks to impose sanctions on China if it fails to cooperate with Washington's investigation into the coronavirus pandemic.

The bill would require the president to notify Congress within 60 days that China had "provided a full and complete accounting" to any US-led probe into the coronavirus outbreak. The rule would also apply to investigations carried out by American allies and UN agencies such as the World Health Organization (WHO).

Related Topic(s): China; Coronavirus; Hong Kong; Media; Nihilism; Optimism; Propaganda, Add Tags
Add to My Group(s)
Go To Commenting
The views expressed herein are the sole responsibility of the author and do not necessarily reflect those of this website or its editors.