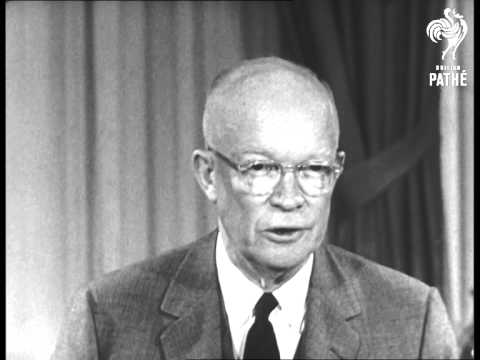 Just before he left office in 1961, President Eisenhower delivered what is quite possibly the most shocking Farewell Address in presidential history. In his speech, which newly elected President John Kennedy listened to, Eisenhower warned the American people about the grave threat that the U.S. "military-industrial complex" posed to the liberties and democratic processes of the American people.

What Ike was referring to was what is today called a "national-security state," a type of governmental structure that is inherent to totalitarian regimes and that wields omnipotent powers to protect "national security."

The communist regime in China is also a national-security state. It just enacted a law designed to protect "national security" in Hong Kong. It is now targeting political dissidents with arrest and punishment for engaging in activities that threaten "national security."

Ike pointed out that this way of life was new to the United States. That's because the United States didn't start out as a national-security state. It started out as a limited-government republic, one whose powers were limited to those enumerated in the Constitution.

That all changed after World War II, when U.S. officials became convinced that there was a worldwide communist conspiracy to take over the United States and the rest of the world. That supposed conspiracy was based in Moscow, Russia, with tentacles reaching to China, North Korea, North Vietnam, and other nations.

U.S. officials decided that a limited-government republic could not defeat this supposed communist conspiracy, one that was composed of various national-security states that wielded omnipotent, dark-side powers. To prevent a communist takeover of the United States, they said, it would be necessary for the federal government to be converted into a national-security state too.

That's how we got the Pentagon, an enormous, permanent standing army, the CIA, and the NSA, which are the three principal components of the U.S. national-security state. That's also how the federal government, operating through the national-security establishment, ended up with omnipotent, dark-side powers, including assassination, coups, sanctions, drug experimentation on unsuspecting people, secretly hiring Nazis, secret files maintained on innocent Americans, kidnapping, torture, and mass secret surveillance.

The American people got a taste of what Ike was talking about during the recent demonstrations against police brutality. While some Pentagon officials later repented the military's participation in opposing the demonstrations, there was no question but that military officials eagerly and proudly followed orders to do so at the time.

As part of its much-vaunted "war on terrorism," the U.S. national-security state established its prison and torture center at its imperialist base in Cuba. Why Cuba? Because Pentagon and U.S. officials wanted to operate in a Constitution-free zone, one where they could do whatever they wanted to accused "terrorists" and not be hassled by pesky criminal defense lawyers or federal judges.

Seizing upon the 9/11 crisis, the U.S. national-security state created an alternative judicial system and prison system in Guantanamo Bay. It then assumed the omnipotent power to determine whether to permit a terrorist suspect to be tried in the constitutional judicial system or the U.S. national-security state's system in Cuba.

The difference is day and night. In the constitutional system, there is the presumption of innocence, the right to effective assistance of counsel, due process of law, right to remain silent, right to bail, right to be free from torture, and other procedural protections our American ancestors included in the Bill of Rights. In the U.S. national-security state's system in Cuba, none of those rights exist, just as they don't exist in ether communist China or communist Cuba.

Related Topic(s): Hong Kong; Pentagon; President Eisenhower; Rights; Security; Speech; Terrorism, Add Tags
Add to My Group(s)
Go To Commenting
The views expressed herein are the sole responsibility of the author and do not necessarily reflect those of this website or its editors.