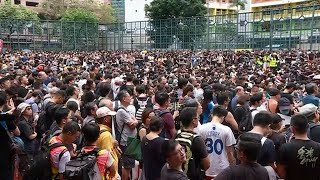 Time was when flying to Hong Kong was a really big thrill or maybe scare would be a better term. Its old airport, Kai Tak, was right in the middle of bustling downtown Hong Kong. Flying into Kai Tak used up 11 of one's 12 lives.

The wide-bodied jumbo aircraft would drop down into a long fjord that was usually shrouded in fog or mist. The nervous passengers would see nothing but cloud. Suddenly, the aircraft would break out of the thick cloud cover right over the airport.

To the left and right were apartment buildings festooned with drying laundry at the same height as one's plane. The big 747 airliner landed with a huge thud and screaming tires right in front of another bunch of apartment buildings.

Even for veteran air travelers like myself, this was a heart-stopping experience. Amazingly, I recall only one crash at Kai Tak, which we used to call "Suicide Airport." Still, it was like landing a jumbo-jet on New York's Park Avenue. Not for the faint of heart.

In 1998, Kai Tak was closed and replaced by the modern, spacious Chek Lap Kok, better known as Hong Kong International. It quickly became one of Asia's principal aviation hubs.

This week, Hong Kong airport was besieged and shut down by thousands of young local demonstrators protesting China's attempt to impose a new extradition law on Hong Kong that would allow Beijing to arrest Hong Kong residents for "anti-state" activities. The deal that Hong Kong's former colonial Britain signed with China calls for "two-states, one nation," with considerable independence for the former island colony.

But anyone who thinks China's iron-fisted rulers will allow a scrap of paper to limit their influence over Hong Kong is dead wrong. For them, Hong Kong is as much a part of China as Shanghai. So, too, is Taiwan.

The massive rioting in Hong Kong earlier this week set off alarm bells in Beijing, which runs an Orwellian police state on the mainland. China's hard-line leaders rightly fear that the fracas in Hong Kong could incite other uprisings across China. Everyone remembers the long, bloody Cultural Revolution of the 1970's with its rampaging Red Guards.

Perhaps more important, Chinese leaders study their nation's history and draw lessons from it, unlike America's history-free politicians. For the Americans, history is what was on Fox TV the week before.

What Beijing really fears is another Taiping Rebellion. A nobody named Hong Xiuqan proclaimed himself the brother of Jesus and raised a vast peasant army to overthrow the ruling Manchu dynasty in Beijing. Brutal civil war raged from 1850-1864 in which up to 100 million are believed to have been killed or died of famine.

If this sounds completely crazy, think of all the Republican sycophants that call President Trump the reincarnation of the ancient Hebrew Queen Esther or a "Christian warrior." Bizarre behavior and beliefs are universal.

China has warned the rioting Hong Kong students to cease their protests or face intervention by Beijing's tough paramilitary police, which backs up the regular People's Army. Chinese armed police and soldiers are massing just across the border in Shenzhen, a mere taxi ride from downtown Hong Kong.

If the Hong Kong students are not wise, they risk winding up in China's penal camps, the "laogai." Large numbers of Muslim Uighurs from Xinjiang have been locked away in China's western laogai.

The airport riots now appear over but continue in Hong Kong's streets. If the People's Police or Liberation Army do intervene in Hong Kong to impose China's iron hand, they could spark another Tiananmen Square bloodbath. But once Beijing's forces impose martial law on Hong Kong, its days of autonomy will be over.

Related Topic(s): China; Hong Kong; Protest; Rebellion; Students, Add Tags
Add to My Group(s)
Go To Commenting
The views expressed herein are the sole responsibility of the author and do not necessarily reflect those of this website or its editors.