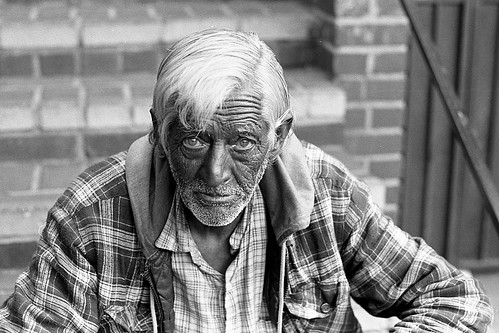 A story for each wrinkle
(Image by dualdflipflop)   Details   DMCA

"Trump: I may tackle homelessness as world leaders can't be looking at that"

According to the above Guardian article, President Trump is disturbed about America's image around the world. It seems that people living on the streets of our cities give the US an image blackeye. After all, America cannot be seen as great with poor and mentally ill people living on the streets. Something has to be done to clean up America's image, according to Trump.

Trump says he might do something about this public relations disaster. From the Guardian article it sounds like Trump is going to step in with federal action. Nobody thinks that Trump, or anybody else for that matter, is going to propose any antipoverty, homelessness, and mental health programs.

Trump is quoted as saying of the homeless:

"Some of them have mental problems where they don't even know they're living that way. In fact, perhaps they like living that way " We cannot ruin our cities. And you have people that work in those cities. They work in office buildings and to get into the building, they have to walk through a scene that nobody would have believed possible three years ago."

In 2012 I wrote an article for The Real News Network on the "Criminalization of Homelessness". The majority of Americans are one paycheck away from being homeless. After the Great Recession homelessness swelled. Many cities took aggressive action, not to help the homeless, but to make it illegal. As I said in the article:

"Some of the measures that cities take to get rid of the homeless are just down- right mean, such as welding public bathroom doors shut, turning off public water fountains and removing park benches. Others are silly, such as making it illegal to have an open umbrella in a public place when it is not raining."

"There are even laws against concerned private citizens helping the homeless. Some cities have laws against giving money to the homeless. Cities have banning people voluntarily helping or feeding people in public places. In many cities people who had been routinely taking blankets, sandwiches, soup and hot coffee to homeless people on cold winter nights have been banned from doing so. Let the bums freeze to death, is the attitude. So, next time you are about to give a panhandler a buck be careful, look up and down the street for a policeman first because you may be breaking the law and find yourself paying a big fine or even winding up in jail yourself."

Food, shelter, clothing, education, care for the elderly and healthcare, including mental healthcare are human rights. An economic system that fails to meet those responsibilities of society is a failed system.

Capitalism is a failed economic and social system. It rewards the rich and punishes the poor. It encourages competition instead of cooperation. It turns the haves against the have-nots. Instead of protecting everybody's freedom, it oppresses the freedoms of non-conformist individuals.

Capitalism and democracy are incompatible. The Founding Fathers devised a system of government dominated by those with wealth, and protection from the will of the people. The US Constitution designed a representative form of government that tilts to the elites. Capitalism prevents participatory democracy by rewarding corruption.

The hypocrisy of capitalism is that it fails over and over again. It is in need of constant bailout by the public. It cannot survive without war. The real poverty is not those living on the streets. The real poverty is those that roam the halls of government. They are morally impoverished.

(My guess is that debtors' prisons fell into disrepute because too many elites fell into debt when their gambles went bust. Take Trump and his bankruptcies for example.)

The greatness of a people is not in their slogans. It is by their actions. Trump is no worse than Obama or any of his predecessors. The difference is that Trump is crude but honest. Obama was articulate and dishonest. They both have the same corrupt values, selfishness and lack of empathy.