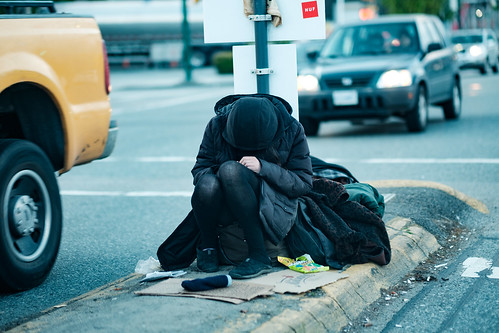 PORTLAND, Ore.--It is 8 a.m. I am in the small offices of Street Roots, a weekly newspaper that prints 10,000 copies per edition. Those who sell the newspaper on the streets--all of them victims of extreme poverty and half of them homeless--have gathered before heading out with their bundles to spend hours in the cold and rain.

"There is foot care on Mondays starting at 8 a.m. with the nurses," Cole Merkel, the director of the vendor program, shouts above the chatter. "If you need to get your feet taken care of, come in for the nurses' foot care. Just a really quick shout-out and thank you to Leo and Nettie Johnson, who called up to City Hall this week to testify about the criminalization of homelessness to City Council and the mayor. Super awesome."

The men and women, most middle-aged or elderly, sit on folding chairs that hug the walls. They are wrapped in layers of worn and tattered clothing. Some cradle small dogs. Others cup their hands around disposable coffee cups and take small sips. The weekly newspaper was founded in 1998. It focuses on issues surrounding social and environmental justice as well as homelessness. It also reprints poems and artwork by the 180 vendors, who buy the paper for 25 cents a copy and sell it for a dollar.

On the walls there are poignant reminders of the lives these people lead, including posters of missing men and women, notices about where to find free food or clothing, and scattered one-page obituaries of those who died recently, many discovered in parks or on sidewalks. The average age at death for a man is 51 and for a woman 43. Nearly half succumb to alcohol or drugs, 28 percent are hit by vehicles and 9 percent commit suicide. Life expectancy plummets once you become homeless. From 50 to 80 homeless people die on the streets of Portland every year, and many more in its hospitals.

"Missing: Robert Gary Maricelli, not seen since Feb. 10, 11:00 pm," reads another. Maricelli, 22, was last sighted near the Steel Bridge in Portland.

These men and women, and increasingly children, are the collateral damage of the corporate state, their dignity and lives destroyed by the massive transference of wealth upward, deindustrialization and the slashing of federal investment in affordable housing begun during the Reagan administration. The lack of stable jobs that pay a living wage in the gig and temp economy, the collapse of mental health and medical services for the poor, and gentrification are turning America into a living hell for hundreds of thousands of its citizens. And this is just the start.

Though federal estimates put the nation's homeless number at 554,000, most cities--including Portland, which officially has about 4,000 people without shelter--estimate the homeless, notoriously hard to count, to be at least three times higher. Portland schools, like most public schools throughout the country, are seeing growing homelessness among their students--1,522 children in the Beaverton School District, or 4 percent of the total enrollment, and 1,509 in the Portland Public Schools, or 3 percent of total enrollment. The problem extends to many of Oregon's smallest towns. In Butte Falls (population 429 in 2010) in Jackson County, there are 56 homeless students, or 30 percent of the district's total enrollment. Many homeless students, because they often drift from one temporary space to another, never appear in the official statistics.

As we barrel toward another economic collapse, the suffering endured by those on the streets will become ever more familiar, especially with the corporate state intent on further reducing or eliminating social services in the name of austerity. Nothing will halt the downward spiral other than sustained civil disobedience. The two ruling political parties are wedded to an economic system that serves the corporate rich and punishes and criminalizes the poor and the working poor. Over half the country is probably only a few paychecks away from being on the streets.

This gritty section of Portland was once known as Nihonmachi or Japantown. The Street Roots newspaper is housed in the former Chitose Laundry. Across the street is the old Oshu Nippo News, the Japanese-language daily newspaper that was raided by the FBI on Dec. 7, 1941, when Pearl Harbor was attacked. It was shut down and its staff arrested. The neighborhood's Japanese population was rounded up, stripped of all possessions and placed in concentration camps, part of the 120,000 Japanese-Americans, most from California and the Northwest, who were interned during the war. People who were only one-sixteenth Japanese were arrested. Sixty-two percent of those displaced by the internment order were U.S. citizens. There were no credible reports of them being a security risk. It was a policy grounded in racism.

The Japanese community in Portland never resurrected itself after the war. The past crimes of the state merge, in the eyes of Kaia Sand, the executive director of Street Roots, with the present ones.

"Those families were rendered homeless and incarcerated by order of the federal government," she says. "Their possessions were reduced to what fit in suitcases. Now, on these same streets, people also carry their bags and their sorrows without a home."

Charles McPherson, 34, stands looking at the collection of recent obituaries posted on the wall near the front door. He was about 2 when his father died. In his senior year in high school he was taken hostage by an escaped convict and held for 12 hours during a standoff with police. He never went back to school.

"PTSD," he says of his dropping out of school. "I could not be in crowds."