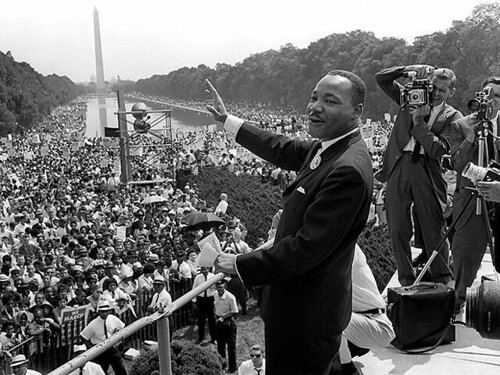 This three day holiday, the US killing machine media will again celebrate the birthday of King, but in 1967, one year to the day before Rev. King received a bullet to his head, bold headlines in overseas newspapers all around the world read, KING CALLS US "GREATEST PURVEYOR OF VIOLENCE IN THE WORLD." The same morning, in the USA of Wars, Wall St. owned, CIA controlled, TV and newspapers, which defended and praised the war in Vietnam that King had condemned in a sermon at Riverside Church in New York, vilified King, as a traitor to his country and an embarrassment to the African-American community.

One hundred and sixty-eight newspapers denounced him in the days that followed. These editorials had a peculiarly vicious flavor. It was clear that King's main transgression was not knowing his place. the Washington Post wrote that King had "diminished his usefulness to his cause, his country, and his people." The New York Times, in "Dr. King's Error," reminded King that his proper battlegrounds were "in Chicago and Harlem and Watts."['Before the Media Lionized Martin Luther King Jr., They Denounced Him - Reflecting on revisionist history 50 years later' by Matt Taibbi, Rolling Stone, 4/4/2018] https://www.rollingstone.com/politics/politics-features/before-the-media-lionized-martin-luther-king-jr-they-denounced-him-629494/

King's blistering nightmarish 1967 New York sermon 'Beyond Vietnam - a Time to Break Silence' came four years after his 1963 'I Have a Dream' speech at the March on Washington. In 1967, King again spoke to the people, not to the government he dismissed as the greatest purveyor of violence in the world, and said that progress on social and human rights issues at home he had worked for was impossible as long as massive financing and human resources were being used to kill the poor overseas by the millions in order to maintain "unjust predatory investments."

For a half-century, this criminal mainstream cartel of giant entertainment/news and publishing corporations have blacked out the text of King's blistering 1967 New York sermon condemning the genocidal American military action in Vietnam in which King gave a damning history of the US in Vietnam since 1945. King admonished Americans,

"The Vietnamese people proclaimed their own independence in 1945 after a combined French and Japanese occupation and before the communist revolution in China. They were led by Ho Chi Minh. Even though they quoted the American Declaration of Independence in their own document of freedom " we decided to support France in its reconquest of her former colony. For nine years following 1945 we denied the people of Vietnam the right of independence. For nine years we vigorously supported the French in their abortive effort to recolonize Vietnam. "After the French were defeated, it looked as if independence and land reform would come again through the Geneva Agreement. But instead there came the United States, determined that Ho should not unify the temporarily divided nation, and the peasants watched again as we supported one of the most vicious modern dictators, our chosen man, Premier Diem. The peasants watched and cringed as Diem ruthlessly rooted out all opposition, supported their extortionist landlords, and refused even to discuss reunification with the North. The peasants watched as all this was presided over by United States and by increasing numbers of United States troops who came to help quell the insurgency that Diem's methods had aroused. When Diem was overthrown " the long line of military dictators seemed to offer no real change, especially in terms of their need for land and peace"

America increased our troop commitments in support of governments which were singularly corrupt, inept, and without popular support. "Now they languish under our bombs and consider us, not their fellow Vietnamese, the real enemy. They move sadly and apathetically as we herd them off the land of their fathers into concentration camps where minimal social needs are rarely met. They know they must move on or be destroyed by our bombs.

So they go, primarily women and children and the aged. They watch as we poison their water, as we kill a million acres of their crops. They must weep as the bulldozers roar through their areas preparing to destroy the precious trees. They wander into the hospitals with at least twenty casualties from American firepower for one Vietcong-inflicted injury. So far we may have killed a million of them, mostly children. They wander into the towns and see thousands of the children, homeless, without clothes, running in packs on the streets like animals. They see the children degraded by our soldiers as they beg for food. They see the children selling their sisters to our soldiers, soliciting for their mothers.What do the peasants think as we ally ourselves with the landlords and as we refuse to put any action into our many words concerning land reform? What do they think as we test out our latest weapons on them, just as the Germans tested out new medicine and new tortures in the concentration camps of Europe? Where are the roots of the independent Vietnam we claim to be building? " We have destroyed their two most cherished institutions: the family and the village. We have destroyed their land and their crops. We have cooperated in the crushing -- in the crushing of the nation's only non-Communist revolutionary political force, the unified Buddhist Church. We have supported the enemies of the peasants of Saigon. We have corrupted their women and children and killed their men." "

Look across the seas and see individual capitalists of the West investing huge sums of money in Asia, Africa, and South America, only to take the profits out with no concern for the social betterment of the country. This is a role our nation has taken, " refusing to give up the privileges and the pleasures that comes from the immense profits of overseas investments. This is not just."

[The above quote is from Martin Luther King's New York sermon BEYOND VIETNAM - A TIME TO BREAK SILENCE, given in New York exactly one year to the day before was murdered. click here ]

[The above quote is from Martin Luther King's New York sermon BEYOND VIETNAM A TIME TO BREAK SILENCE, given in New York exactly one year to the day before was murdered. click here ]

The soulless investors of billions and billions of dollars in the Vietnam War had to have felt their investments threatened by the second March on Washington that King had been planning to connect poverty at home with the huge expenditures on the war in Vietnam. At the time King was shot, he was supposed to be planning a larger demonstration to be held in Washington in a few months: the Poor People's Campaign. The march had been in the works for months, since King in late 1967 called for thousands of Americans living in poverty to travel to the capital to demand economic equality.['What Happened to Martin Luther King Jr.'s Last Campaigns' Time Magazine, 4/2/2018] e.com/5221565/martin-luther-king-last-campaign/

Previous Article by this author:

Related Topic(s): Martin Luther King Birthday, Add Tags
Add to My Group(s)
Go To Commenting
The views expressed herein are the sole responsibility of the author and do not necessarily reflect those of this website or its editors.