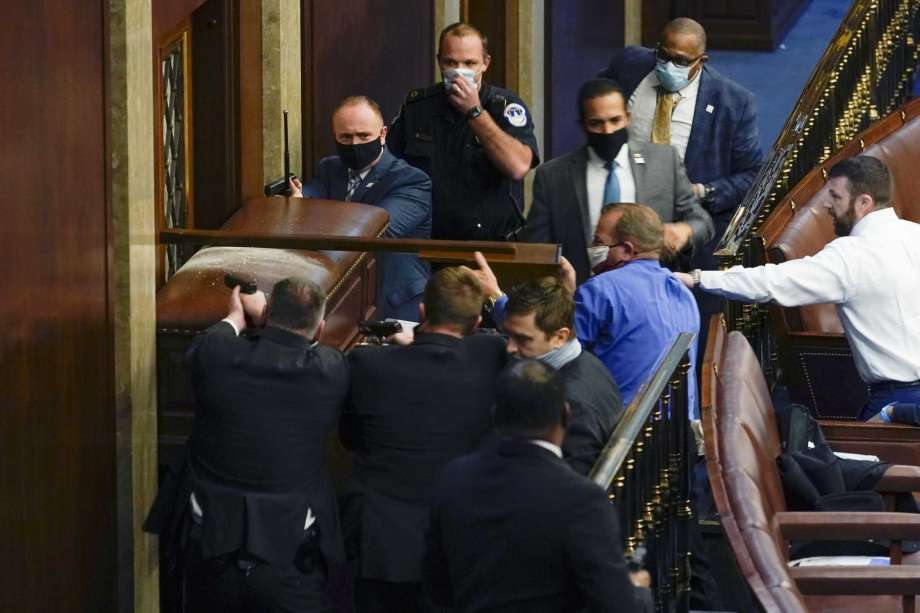 Hold On to That Fear | Portside

This letter is about that nauseating, trembling fear you felt when the hate exploded at you on January 6. Please don't forget it. Journal about it before it fades. Tolerate the nightmares. Keep pen and paper on your nightstand to record what woke you from screaming fits. Don't block it out. Don't let it go.

If you can bank those emotions you had as you huddled together and hoped the doors would hold, that day may turn out to be a blessing for you"and even better for our republic. In fact, it may just be the thing that saves our republic if that is still possible.

The fear you felt that day was an authentic, if brief, reflection of what millions of people have endured because of the votes you and your past colleagues cast in that very room, sitting in those very chairs, as they authorized trillions upon trillions of dollars to feed and unleash the largest war machine on Earth.

Think about the votes you cast "to support the troops," which in truth sent them to beat down someone's door at 2 a.m., rush in, scream at a cowering family, steal their savings, terrorize the women and children, seize the men and tell them all the next time you will make their village "look like the moon."

Think about just one of the fighter jets you bought for us, flying low and late at night over a village that never heard anything louder than the bleating of a goat, suddenly overwhelmed with ear-splitting, shrieking thunder powerful enough to knock you over. Think of the mother living under the bombs, knowing the only water she has for her baby will make him deathly ill. Think of the countless times you and your predecessors voted to turn our plowshares into the swords and soldiers required to terrorize brown and black people hungering for a little land and a little of the democracy you say the Capitol Building so singularly represents. Think how many of those young, idealistic soldiers you voted to "support" came back with broken bodies and disturbed minds.

Think about the votes you cast authorizing increase after increase for the U.S. military, already bigger than those of the next 10 countries combined, to provide the latest weaponry, the deadliest special forces, the most advanced warplanes. Think about how many lies you were told to get your vote.

Perhaps then you'll be able to stand up against the next disinformation campaign that always precedes the march to war or the next act of violence against people with whom we have no quarrel. And doing so, you'll be able to vote for the things you know in your heart you'd much rather vote for, which just happen to be the same things the vast majority of our people need and support.

For years to come, our nation and its leaders will point to January 6 as a day to remember. My fervent hope is that you and your colleagues will recall how you felt huddled together on the floor of the House chamber and remember it not only as a day of fear, but as the day you gained the greatest insight and empathy of your life.

[Ferner was a hospital corpsman during the Vietnam war and has travelled to Iraq and Afghanistan. He writes in Toledo, Ohio.]


Seventeen Texas Republicans were among the eight U.S. senators and 139 representatives who fell for the Trump misinformation campaign, and voted to sustain objections to the electoral vote counts of at least one state this week..

Among the objecting US Representatives were Troy Nehls, representing Texas' 22nd Conressional Disrict, in the Houston area, and David Clyde, representing the 9th Congressional District in Georgia, seen here congratulating each other on the Capitol steps on January 4, before taking part in a group photo of freshman members, sworn in 24 hours earlier.

Two days later, on Wednesday, January 6, Nehls and Clyde objected to the election count for Arizona and Pennsylvania, even as the Vote-Counting Day Riot raged.

Related Topic(s): Fear Brings New Perspective; Politicians Accountability; Republican Denial; Vote-counting Day Riot, Add Tags
Add to My Group(s)
Go To Commenting
The views expressed herein are the sole responsibility of the author and do not necessarily reflect those of this website or its editors.