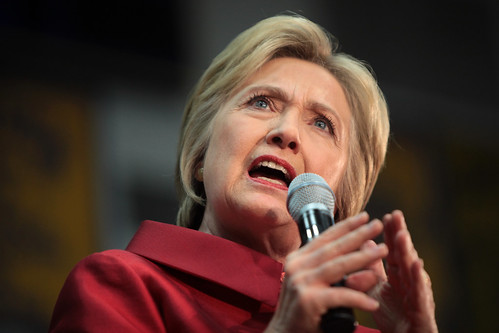 MICHELE FLOURNOY, the former Defense Department official whom Defense Onecalls "the woman expected to run the Pentagon under Hillary Clinton," this week advocated for "sending more American troops into combat against ISIS and the Assad regime than the Obama administration has been willing to commit." In an interview with that outlet, Flournoy "said she would direct U.S. troops to push President Bashar al-Assad's forces out of southern Syria and would send more American boots to fight the Islamic State in the region." She had previously "condemned the Obama administration's ISIS policy as ineffectual,"denouncing it as "under-resourced."

(Image by Defense One)   Details   DMCA

This week, Flournoy specifically advocated what she called "limited military coercion" to oust Assad. In August 2014, Obama announced what he called "limited airstrikes in Iraq" -- and they're still continuing almost two years later. Also note the clinical euphemism Flournoy created -- "military coercion" -- for creating a "no-bomb zone" that would entail "a declaratory policy backed up by the threat of force. 'If you bomb the folks we support, we will retaliate using standoff means to destroy [Russian] proxy forces, or, in this case, Syrian assets,'" she said. Despite D.C. conventional wisdom that Obama is guilty of "inaction" in Syria, he has sent substantial aid, weapons, and training to Syrian rebels while repeatedly bombing ISIS targets in Syria.

Even U.S. military officials have said that these sorts of no-fly or no-bomb guarantees Flournoy is promising -- which Hillary Clinton herself has previously advocated -- would risk a military confrontation with Russia. Obama's defense secretary, Ash Carter, told a Senate hearing last December that the policy Clinton advocates "would require 'substantial' ground forces and would put the U.S. military at risk of a direct confrontation with the Syrian regime and Russian forces." Nonetheless, the Pentagon official highly likely to be Clinton's defense secretary is clearly signaling their intention to proceed with escalated military action. The carnage in Syria is horrifying, but no rational person should think that U.S. military action will be designed to "help Syrians."

Related Topic(s): Bashar Al-assad; Hillary Clinton; Pentagon; Threat; War On Syria, Add Tags
Add to My Group(s)
Go To Commenting
The views expressed herein are the sole responsibility of the author and do not necessarily reflect those of this website or its editors.