Click Here to Remove All Ads
There's definitely some Selina Meyer in HRC -- or vice versa. 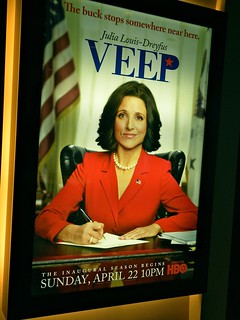 This week, the State Department released a large batch of the emails that Hillary Clinton sent and received (on her personal account via a private server!) when she was secretary of state. The media, naturally, dove into this pool and quickly found the most amusing items among the 3,096 pages. One day, Clinton had heard about a Cabinet meeting on the radio and asked her aides, "Can I go?" Another time, she emailed the protocol chief at State, "Can you contact your protocol friend in China and ask him if I could get photos of the carpets of the rooms I met in w POTUS during the recent trip? I loved the designs." She once struggled to get a fax machine to work. Her emails showed how she and her lieutenants assiduously worked the press to get positive coverage. They revealed interesting details of her close relationship with author and political operative Sidney Blumenthal.
But overall, this trove of emails -- the first of several to come -- depicts Clinton as an earnest public servant toiling away on important affairs of state (global food security, Afghanistan policy, climate change, and international women's rights) while often operating in a Veep-like world, as in the HBO comedy in which Julia Louis-Dreyfuss plays a vice president-turned-president who must contend with absurdities and indignities large and small as she handles the gravest of matters.


These emails chronicle several scenes that could appear in the television show. At least, it would be easy to envision President (or Vice President) Selina Meyer in these situations.


Go to Mother Jones to read the rest of this article.

David Corn is  Mother Jones ' Washington bureau chief. For more of his stories,  click here . He's also  on  Twitter  and  Facebook .  RSS  |  TWITTER  David is (more...)
Related Topic(s): Email; Hillary Clinton; Julia Louis-dreyfuss, Add Tags
Add to My Group(s)
Go To Commenting
The views expressed herein are the sole responsibility of the author and do not necessarily reflect those of this website or its editors.