Hillary Clinton is looking to Ohio for a possible running mate in either U.S. Sen. Sherrod Brown or U.S. Rep. Tim Ryan of the 13th Congressional District. And although there's not much to be said about Brown except that he's a solid pick, is politically famous nationally, and is more of a Progressive than a Democrat, a lot of people are most likely wondering, "Who in the hell is Tim Ryan?"

Well, let's not say Ryan's a shoe-in quite yet. There are plenty of others on Ms. Clinton's list for Vice Presidential hopefuls, too - just released earlier this week - including some heavy hitters like U.S. Sens. Elizabeth Warren of Massachusetts, Cory Booker of New Jersey and Tim Kaine of Virginia, as well as U.S. Rep. Xavier Becerra of Sacramento, Calif.; Labor Secretary Tom Perez; Housing and Urban Development Secretary Julian Castro; and Los Angeles Mayor Eric Garcetti, according to reports.

The Old Girl, closing in on age 70 (Hillary is 68), most likely picked Ryan for his age. At a young and good-looking age 42, the vampiress of the Democratic Party will undoubtedly use Ryan's shiny, plastic knickknack, charismatic charm to woe voters toward her side of the fence. And although Sherrod Brown has done some outstanding things for the Democratic Party and the nation in his tenure as a federal leader, he's 63. Sherrod's an old racehorse who can't quite "run" like the younger geldings. Youth before accomplishment always, in a country that loves young faces and youthful charm. 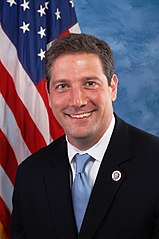 What has Ryan done in his seven terms? Well, his most noteworthy claim-to-fame seems to be writing a book on the benefits of meditation. And he replaced a disgraced and notorious Congressman named James A. Traficant Jr., an eccentric Ohio Democrat who was expelled from Congress after being found guilty of bribery and racketeering, spent seven years in a federal prison and died as the result of a weird and catastrophic tractor accident on his family's farm on September 27, 2014.

And although I can't say Tim Ryan has done badly, I can't really think of much he's done for the Mahoning Valley, either. To tell you the truth, I sort of like Tim Ryan. He strikes me as a really nice guy. The kind of guy you wouldn't mind having a beer with and chatting about the current Number One Craze in Ohio, the Cleveland Cavaliers, who might just win the NBA Championship within the next waning few hours. Really, if the Mahoning Valley got a man who looks good, sounds good, and for the most part, stays out of trouble, Mr. Ryan has definitely been a winner. About the only thing of any scandalous substance Tim has been found guilty of is a public intoxication charge.

And hey, a little bit of drinking and socializing just goes with the job of being a Congressman, right? A steady liquid diet of lemonade or Dr. Pepper can get old awfully fast. If that's all the dirt that they can get on Mr. Ryan, well, most of his constituents would most likely sprinkle it on their french fries and wolf them down. And Tim has a beautiful wife who brought into the marriage two happy and healthy children (Ryan was a bachelor and fatherless before his marriage to Andrea Zetts), and they live in a big mansion in Howland Township, fit for a king and his lady and their rugrats; and Howland Township's not too far from Niles, Ohio, Ryan's birthplace (which is also the birthplace of William McKinley, by the way). And like the locals in Trumbull County have always said, "It's a great place to raise a family".

But there's something very weird, perhaps even humorous, about the Old Girl's pick in Tim Ryan. Although Traficant was a rogue, and pretty much despised by Hillary Clinton's significant other way back in the day, it can be said that Jimbo built pyramids around Youngstown. Traficant enjoyed the riches of the bounty of pork-barrel project funding, and three of the big projects that he brought to town were two monolithic federal courthouse buildings in downtown Youngstown, along with a gargantuan sports/entertainment facility Traficant anchored by grabbing a $26.8 million grant. This facility, which is named "The Covelli Centre," looks sort of out-of-place in the downtown of what is now a small city with modest buildings at city center. The Covelli Centre, along with the two federal courthouses, stand amorphously unusual - maybe more apropos for Cleveland, Columbus or Cincinnati.

Traficant was a visionary and a true meat and potatoes politician who always wanted to make sure his constituents had their share of meat and potatoes. He was very instrumental in the renewal and recreation of the Western Reserve Port Authority, which runs the Youngstown-Warren Regional Airport. Traficant aggressively went after bringing this important economic and business development board back to life after the City of Youngstown threatened to make it obsolete and defunct. Traficant also secured $15 million in federal funds to provide loans to small businesses in the Mahoning Valley and his office served as the catalyst to getting Veterans Administration clinics built in Youngstown and East Liverpool. And Traficant also obtained funding to expand the Youngstown Air Reserve Station in Vienna and went the entire nine yards to assure that additional planes were added to keep the federal government from closing the Youngstown Air Reserve Station. It's no wonder that Congressman Traficant's been lauded and loved through the years by a large portion of the Mahoning Valley's military veteran populace. Many vets gave him a sad and heartfelt few words on televised media reports during the time of his recent suffering and during televised tributes right after his death.

Meanwhile, Ryan's flip-flopping and yellow-livered equivocating got him in the national spotlight when he made this ridiculous assertion in January 2015: "I was pro-life, but we should leave decision to women." (See U.S. Rep. Tim Ryan's OnTheIssues page here). And in a constituency that may indeed be rather poor by national standards, many who live here hold close to religious tenets and their family values are on top of the priority list. Many never leave the Mahoning Valley because they are so attached to their friends and families, in fact. It's amazing that Tim Ryan did not get much flack locally for doing the big switcheroo of being pro-life as a spring chicken to the political game and once he became well-seasoned, switched dramatically to pro-choice. OnTheIssues gives Ryan a very low rating in this category (See the 'Families and Children' category and the dismal 25% rating by The Christian Coalition). And although he's good as gold with labor leaders, the U.S. Chamber of Commerce gives him failing marks in the areas of being pro-business and pro-management in OnTheIssues. But he is given a 90% by the Alliance for Retired Americans, indicating a pro-senior voting record. Not surprising, because a large portion of his constituency is retired and/or aged. And with more than 37% of his constituency being African-American, the NAACP gives Ryan an 86% rating, indicating a pro-Affirmative Action stance. Quizzically, however, he doesn't do so well in the Gay Rights area, getting a failing 63% rating by the Human Rights Alliance, the leading advocacy group for our nation's LGBT community. At best, Ryan has a mixed rating here, and this is dysfunctional and disappointing. After all, Ryan is labeled a "hard-core liberal" by OnTheIssues.

In a Feb. 1, 2015 blog post ofThe Hill, Kristen Day writes: "The truth is you cannot get funding from national Democratic spigots unless you pass the pro-choice litmus test. Tim Ryan, former champion of pro-life and common ground initiatives, former Advisory Board member of Democrats for Life of America (DFLA), offers the latest evidence. That litmus test, more than anything else, continues to undermine the Democratic Party's development of candidates who can contest red-leaning and purple states and districts. In so doing, it cedes control of Congress to the GOP.

Related Topic(s): Democrats; Government; Hillary 2016; Hillary Clinton; Hillary Clinton Supporter; Hillarybots Hillbots, Add Tags
Add to My Group(s)
Go To Commenting
The views expressed herein are the sole responsibility of the author and do not necessarily reflect those of this website or its editors.