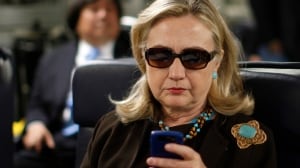 Truthdig Editor in Chief Robert Scheer, in the immediate aftermath of FBI Director James Comey's announcement that the bureau would not seek an indictment against Hillary Clinton for her misuse of and failure to secure classified information, asked me to write about the decision. I said that I would but found that I was so angry about the Justice Department's hypocrisy that I just couldn't put pen to paper until I had cooled off for a few days. I was further angered by what I heard in the nationally televised Comey congressional hearings two days after the announcement, from both Democrats and Republicans.

I've not yet cooled off, but I feel as though my anger is focused enough to offer a few thoughts.

First, I want to be clear that I'm not angry at Hillary Clinton personally. I don't like Hillary. I don't support her. I don't trust her. I don't think she would be a good or trustworthy president. But that's not the issue here. The issue is the inherent unfairness in the system.

I was arrested in January 2012 and charged with five felonies, including three counts of espionage, one count of violating the Intelligence Identities Protection Act, and one count of making a false statement. The espionage charges stemmed from conversations I had had with reporters from The New York Times and ABC News about the CIA's torture program. Four of those five charges eventually were dropped.

For the record, I had not made a false statement. That's what is called a "throwaway" charge that the Justice Department files and then offers to bargain away. And I hadn't committed espionage, either.

I did plead guilty to confirming the name of a former CIA colleague to a reporter -- who never made the name public. I did it. I admit it. And I paid a price for it.

That said, providing or confirming the names of former or current CIA officers happens all the time and is almost never prosecuted. Former Deputy Secretary of State Richard Armitage outed CIA officer Valerie Plame and was never prosecuted for it. Former CIA Director David Petraeus revealed the names of at least 10 CIA officers to his mistress, lied to the FBI about doing it and still was never charged. Former CIA Director Leon Panetta exposed the name of the Navy SEAL who killed Osama bin Laden, and Panetta was not charged.

The Justice Department calls that "prosecutorial discretion." I call it an iron fist that came down on my head because I exposed the torture program while those who were politically connected or were friends of the president got a pass on their misdeeds.

Several members of Congress this week raised my case and stated -- as if they had any idea what they were talking about -- that I had had "criminal intent." That's bull. I never had criminal intent. But I still never had a chance. Here's why:

In my very first hearing in the federal Eastern District of Virginia, my judge said that she would not respect precedent as it related to having criminal intent in a national security case. In plain English, she didn't care one whit if there was intent or not. Either I did it or I didn't. If I did it, I should be punished.

At the same time, the Justice Department came up with the novel idea that I had exposed the name and spoken to reporters because I was trying to build a consulting business and sell books. In fact, my book wasn't written at the time, and it didn't come out until two years later.

Furthermore, all the prosecutors had to do was look at my bank account, which I'm sure they did, to see that I was broke. I had no consulting business. It was a lie that was somehow treated as fact because it had been spoken by the Justice Department. But that didn't make it true.

When I finally stood to be formally sentenced in January 2013, the judge asked me if I had revealed the name on purpose.

Related Topic(s): Hillary Clinton; Hillary Server; Investigations; Justice Denied, Add Tags
Add to My Group(s)
Go To Commenting
The views expressed herein are the sole responsibility of the author and do not necessarily reflect those of this website or its editors.