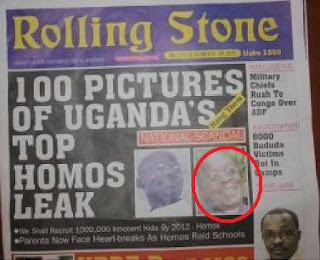 Even though he is an elderly Anglican cleric, a family man with children, Bishop Christopher Senyonjo has gotten many homophobic death threats - because he has been a champion for gay rights as well as the LGBT community's most loving friend and supporter. He risked his life by attending the funeral of human rights activist David Kato:

"Hang Them"
Bishop Senyonjo's picture was published on the now-infamous cover of Uganda's Rolling Stone tabloid along with human rights activist, David Kato and the yellow slash "Hang Them!" It should be noted that Bishop Senyonjo is a family man with two sons and several grandchildren. His sons have also received death threats. Of course, it should be noted that in a country trained to be virulently homophobic, Senyonjo is not immune to murder even if he holds the title of "Bishop." Rolling Stone certainly showed no respect in regards to Senyonjo's status when it published the article. Indeed, the latest news is that the tabloid has not the slightest regret in publishing the article and may take pride in its advocacy.

Giles Muhame, managing editor of the weekly Rolling Stone, said in a statement that he condemned the murder and felt "sorry for the family of Kato". But he also repeated various unproved allegations against the activist, and suggested he lived in an area where murder is common. "This looks like any other crime," he told the Guardian in a telephone interview. "I have no regrets about the story. We were just exposing people who were doing wrong."

Muhame and other recent graduates of Makerere University in Kampala launched Rolling Stone late last year. With a circulation of fewer than 3,000 copies it would have remained obscure were it not for the anti-gay campaign (Guardian, UK)

The outcome of "exposing people who were doing wrong": many of the listed people were evicted from their homes and fired from their jobs. One woman was actually stoned by her neighbors.
Several days ago, Bishop Senyonjo wrote a published letter to Archbishop of Canterbury, Rowen Williams. Please read the entire text here. You will be inspired, elevated, ... and relieved that such men still exist today.

As human beings, we must respect our differences and be united in our call for listening and sharing with each other. To understand God, we are all called to understand the mystery of each other, including our sexualities.

He is incredibly courageous in this letter because he dares to do something which our own Christian Right would never do: point out past the mistakes of Christianity. That he even admits them is remarkable. Think of it: would ANYONE involved in today's Christian Right lower themselves to say such things? Remember, Bishop Senyonjo is telling the great CR that their religion has made errors, causing harm to an enormous amount of people! How can he insult people like David Barton, Tony Perkins and, above all, Bryan Fischer, who has recently, in print and on the radio, told our country that it was God's will that Native Americans lose their land and lives!
BLINDED BY RIGHTEOUSNESS
There are some who will say that Senyonjo is not worth listening to, and that he's foolish for venturing out in such a hostile climate. Some may even say that he'll deserve what he gets. Scorn and venom will pour forth from the very places that should have love and concern. Those people are blinded by their own righteousness to have any compassion or concern for the bishop. They have whipped up emotions to create a mob mentality   that may be uncontrollable and may simply walk away from the situation in Uganda. Or they may look on in silence: Rick Warren, Scott Lively, Lou Engle and all their followers will watch.
And wait.

Rev. Dan Vojir is has been writing/blogging on religion and politics for the better part of ten years. A former radio talk show host (Strictly Books " Talk America Radio Network) and book publisher, Dan has connected with some of the most (more...)
Related Topic(s): Bishop Christopher Senyojo; Bryan Fischer; Christian Right; David Barton; David Kato; Homophobia; LGBT; LGBTI Discrimination; Lou Engle; Rick Warren; (more...) Righteous Assassination; Uganda, Add Tags  (less...)
Add to My Group(s)
Go To Commenting
The views expressed herein are the sole responsibility of the author and do not necessarily reflect those of this website or its editors.