A grisly feature of the "war on terror" was America's descent into torture, but the powers-that-be have decided that the common folk shouldn't worry their little heads about this ugliness

So, you did not believe in the power of the Deep State? Well, you may change your mind after reading a report in The New York Times that the powers-that-be in Washington are about to deep-six the 6,700-page Senate report based on original CIA cables and other documents that not only to depict savage torture practices during the George W. Bush era, but also show that CIA officials consistently lied in claiming these heinous practices yielded information of any intelligence value.

Some of the original detainees jailed at the Guantanamo Bay prison, as put on display by the U.S. military.

In what amounts to a gross violation of the public trust -- not to mention his oath to the Constitution -- Senate Intelligence Committee chair, Sen. Richard Burr, R-North Carolina, has recalled all copies and will put the report under lock and key for good -- dismissing it as a "footnote in history."

The only hope for those of us who want to see torturers held accountable is that some patriotic truthteller has -- or will -- put the report on a thumb drive and send it off to WikiLeaks or some other brave outlet that will publish it. 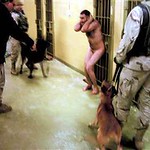 Small wonder that those agencies and individuals involved in the torture and those -- like Burr -- who are afraid of the torturers want to keep the report from public view. According to the Times, the full report describes interrogation sessions "in great detail." It also "explains the origins of the program, identifies the officials involved, and offers details on the role of each agency in the secret prison program" in which detainees were tortured.

Is that why, when copies of the original report were sent to Executive Branch agencies, no one was allowed to read them? Katherine Hawkins, senior counsel at the Constitution Project, immediately called the return of the report to the Senate committee "extremely disturbing." She labeled "absurd" that no one in the Executive Branch was permitted to read the Senate report, five years in the making.

What Burr's subservience to the intelligence agencies that he is supposed to be overseeing tells me is that he will shy away from anything implicating former CIA Director John Brennan and his co-conspirators in other shocking activities.

These include implementing CIA's "Marble" cyber-attack program, which lets it hack into servers and computers and "obfuscate" who the hacker was (as revealed in original CIA documents released on March 31 by WikiLeaks. (Don't look for that revelation in the Times, however.)

Yes, you heard that right. Former National Security Agency Technical Director William Binney and I are persuaded that the "hack" into the Democratic National Committee was not done by Russia, but rather by a very sophisticated and expensive program allowing the CIA to hack into computers like those of the DNC and leave little "telltale signs" -- like Cyrillic letters, for example -- in order to "obfuscate" who did the hacking.

Ray McGovern works with Tell the Word, the publishing arm of the ecumenical Church of the Saviour in inner-city Washington. He was an Army infantry/intelligence officer and then a CIA analyst for 27 years, and is now on the Steering Group of Veteran Intelligence Professionals for Sanity (VIPS). His (more...)
Related Topic(s): Torture, Add Tags
Add to My Group(s)
Go To Commenting
The views expressed herein are the sole responsibility of the author and do not necessarily reflect those of this website or its editors.