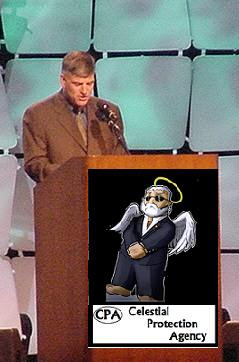 When the Christian Right spouts "God" waaay too much, you know that they're holding up an almost impregnable shield against criticism. But in Sunday night's interview with Lawrence O'Donnell, Franklin Graham held up his shield while retreating pitifully back into the foxhole.

In fact, Graham anticipated an onslaught: he immediately launched into an I'm-just-a-messenger-and-fervent-evangelist. He also reminded everyone that God loves them, just in case anyone thought he was a "hater."

Trump, Birtherism, and Obama's religion. O'Donnell laid them all out for Graham to expound upon, but he steadfastly hammered away at the talking point of Obama being a Christian: airing Graham's previous interview with Christine Amanpour, O'Donnell focused on Graham's perception of Obama as a Christian as opposed to his own definition of a Christian. The exchange led Graham to put up his shield and say that only God could be the judge of that. The sign of retreat, however, came when O'Donnell posed to Graham what was probably the most contemptuous question of his career as leader of the Christian Right:

Graham went on a rambling aside that included his being born again, the wages of sin, and hell. He tried valiantly to fend off a direct hit at his comparatively lavish lifestyle of private jets and several homes (one in Alaska, near Sarah Palin).

In the end, O'Donnell delivered a benign, but slightly sarcastic coup de grace:

In a way, this interview was textbook Christian Right defense: God, Bible, Jesus Christ, minister, evangelist, sin, hell, love. Attack or question any of those and you are definitely anti-Christian, end of discussion. The possibility that using this kind of defense might be cowardly in any way never seems to enter into the mind of the evangelical, because that which he uses as a weapon can just as easily be used as a deep foxhole. Any form of retreat is regarded as strategic or (in cases of denial) even looked upon as a victory.

It is not a victory. It is not a strategic defense. Rather, it is running back behind the skirts of a mother like some spoiled child, declaring himself safe and untouchable and screaming that he was only doing what his mother wanted him to do. I'm not mixing metaphors here because the fierce adult "warrior of God" actually reduces himself to a cowering child and it is a pitiful sight to behold.

I suppose you can argue that this is the Christian Right's best defense. I, however, must argue that there are times when it has become the Christian Right's ONLY defense. For example, when Tony Perkins of Family Research Council opined that neither he, the Council, nor the rantings of the Christian Right were to blame for gay teen suicides, he relied on this tactic: to pick on him would be persecution and anti-Christian because he was definitely sinless and innocent, inferring that he has always done God's work by protecting the family. But in essence, he ran away from the prospect of accountability in a self-righteous, cowardly manner.

FOR THE INEQUITIES THEY DEFEND, THEY POINT TO GOD

Using God as a bulwark for defending discrimination against gays, women, and now Muslims is also cowardly. The don't-shoot-the-messenger meme, goes only so far before it becomes just another lame excuse; one which we'll see being used to endorse federal budget-cutting measures, righteous politicians, anti-Sharia laws, support for Prop 8, and a whole host of deregulations (especially in favor of corporations). And if the tactic seems to go on forever, brace yourself - it will. There hasn't been a proposal yet that can adequately deal with this kind of cowardice.

I wonder if God is getting tired of being what simply amounts to a hole in the ground?

Rev. Dan Vojir is has been writing/blogging on religion and politics for the better part of ten years. A former radio talk show host (Strictly Books " Talk America Radio Network) and book publisher, Dan has connected with some of the most (more...)
Related Topic(s): Bible-thumping; Birthers; Christianity; Cowardice And Impotence; Donald Trump; God; Lawrence O Donnell, Add Tags
Add to My Group(s)
Go To Commenting
The views expressed herein are the sole responsibility of the author and do not necessarily reflect those of this website or its editors.