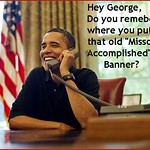 George W. Bush's "Mission Accomplished!" boast takes its name from a banner that was displayed on the aircraft carrier USS Abraham Lincoln during his May 1, 2003 televised address .It referred to his claimed victory in Iraq fourteen years ago. In a less publicized incident, US Defense Secretary Rumsfeld also declared an end to combat operations referring to "Mission Accomplished" in Afghanistan on May 1, 2003, a few hours before Bush's Iraq announcement.

For critics of these wars, the grandstanding remains symbols of unrealistic goals, missed perceptions and political cynicism. Anti-war activists questioned the realism of Bush's "major combat" statement which came to symbolize the irony of declaring victory relatively shortly after the start of America's fourth longest war.

History repeats, more often than many of us prefer, especially in geopolitical contexts wherein regional hegemony is the objective being sought. This appears to be the case with respect to Syria and recent several, some disparate, declarations of victory by foreign "Resistance" armies and their sectarian leaders who have no intention of leaving Syria. "Devine Victory" is again theirs, or so they assure restive populations back home. The latter who increasingly question the needless deaths of their fellow citizens, sons, brothers, husbands, and fathers. And the squandering of their country's limited personal incomes in Syria, Iraq, Yemen, Afghanistan and Lebanon, as nearly half a million civilians have died in Syria with increased civilian killing the past two months. They ask what has any country benefited from the wanton slaughter which shows no realistic signs of ending anytime soon.

In a November 28tharticle by researcher and longtime Lebanese expert Hanin Ghaddar titled "The Regional Dimensions of Hariri's Resignation", she wrote that "earlier this month, while Arab League foreign ministers gathered in Cairo for an emergency meeting called by Saudi Arabia to declare Hizballah a "terrorist organization," Qassem Soleimani, leader of the Iranian Quds Force, was declaring victory in Syria. In a video released immediately after the Cairo meeting, Soleimani is seen crossing the Iraqi-Syrian border into Bou Kamal in Deir al-Zour province, marking a milestone for Iran's power in the Middle East."

Soleimani's and other Iranian leader's declarations of Victory in Syria follow statements by Hezbollah leader Sayyed Hassan Nasrallah, as reported by the partially Iranian funded pro-Hezbollah Lebanese newspaper al-Akhbar, that: "We have won in the war in Syria." [Also see Reuters 9/12/2017, "Hezbollah declares Syria victory, Russia says much of country won back"].

Some Hezbollah officials in Hezbollah's security zone of South Beirut, also claim that the Party of God is itself already benefiting from its most recent "Divine Victory," by further consolidating Iran's power and more deeply dominating Lebanon's governmental institutions. The results of Lebanese elections currently scheduled to be held in six months, assuming Hezbollah wins as they claim they will, would deliver to Iran yet more access to Lebanese state institutions that it already dominates, including the Office of the President, Parliament, the Lebanese Armed Forces, the Internal Security Forces (ISF) and General Security (GS).

By its prematurely declared "victory" in Syria, Iran's leadership claims that it now has a land bridge linking Tehran to Beirut and the Mediterranean giving the Islamic Republic a permanent military corridor to share with Hezbollah. Hanin Ghaddar has also pointed out that, "While the bridge has existed in some form for some time now, this month was the first time Iran was able to exert complete control over this crucial passageway, thanks to its influence in a fractured Syria."

Iranian Foreign Minister Mohammad Javad Zarif declared Iran's victory in Syria and announced that efforts to politically or militarily remove Iranian military advisers or Iranian militia fighters from Syria as part of a deal to end the war-torn country's six-year civil war will not succeed. "The U.S. and Russia cannot decide for Iran. We are there at the request of the Syrian government," Zarif said. "It's our region. It's the Persian Gulf, not the Gulf of Mexico. We are going nowhere."

Perhaps it was a slip of the tongue, but Zarif's ad lib regarding the Gulf of Mexico is interesting since nearly simultaneously, Iranian warships were preparing to leave the waters of the Persian Gulf to tour another gulf--the one that lies between the U.S. and Mexico. At a time when Iran is looking to expand and modernize its military, especially its long-range missile systems, its navy commander, Rear Admiral Hossein Khanzadi, held press conference announcing that a fleet of Iranian ships would depart for the Gulf of Mexico to expand Iran's influence.

Besides reasons of domestic consumption, the "Mission Accomplished" in Syria boasts are aimed at trying to pressure rebel forces in Syria and the civilian population to give up their fight to change Syria's government. This as rebel forces dig tunnels and prepare for long term asymmetric guerilla warfare that may well last years. It is much more likely according to many that the war is Syria is far from over and will likely continue for several years or longer.

Since October 2017, the killing in Syria has increased not ceased. Unwilling to give Syria to Iran, last week rebel groups shot down a regime helicopter with a guided missile near the border with Lebanon and the Israeli occupied Golan Heights, according to the Britain-based Syrian Observatory for Human Rights chief Rami Abdel Rahman.

Shortly thereafter it was demonstrated yet again that Iran/Hezbollah claims that they have won the war in Syria are empty boasts. Israel has confirmed that it substantially destroyed an Iranian military base near El-Kiswah, 14 km (8 miles) south of Damascus and 31 miles east of the Golan Heights. Satellite images commissioned by the BBC show a series of more than two dozen large low-rise buildings for housing approximately 500 soldiers and vehicles. Shia fighters from several countries - including Pakistan and Afghanistan - are also in Syria under the control of the IRGC and there is growing speculation that the site was to house long term some of them while keeping them from public view. The Syrian public increasing opposes what they see firsthand daily and it is that Iran is forcibly evicting non-Shia residents, and buying up real estate in and around Damascus and Northwest Syria, near Tartus, where a Palestinian refugee camp was recently bulldozed. Much as Iran continues real estate acquisitions in South Beirut.

Related Topic(s): Mission Accomplished, Add Tags
Add to My Group(s)
Go To Commenting
The views expressed herein are the sole responsibility of the author and do not necessarily reflect those of this website or its editors.