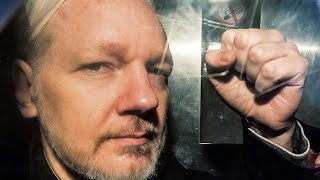 Last week in an episode of my daily Ron Paul Liberty Report we discussed whether the US and British government were actually trying to kill jailed Wikileaks publisher Julian Assange. More than seven years ago Assange was granted asylum from the government of Ecuador over fears that espionage charges were being prepared against him by Washington. He spent those years in a small room in the Ecuadorian embassy in London without sunlight. Without fresh air. Without exercise. Without medical treatment.

Assange's critics mocked him for entering the embassy, saying his fear that the US government would indict him was paranoia. Then the US-controlled International Monetary Fund dangled a four billion dollar loan in front of Ecuadorian president Lenin Moreno (elected in 2017, replacing the president who granted him asylum), and Moreno eagerly handed Assange over to British authorities who the same day hauled him before the court to answer for skipping bail. No medical examination after what was seven years of house arrest. Straight to court. He was sentenced to 50 weeks, the maximum sentence.

And what happened while he was serving time in the notorious Belmarsh prison? The Trump Administration decided to go where the Obama Administration before him did not dare to tread: he was indicted on 17 counts under the US Espionage Act and now faces 170 years in prison or worse once the formality of his extradition hearing is over. He faces life in prison for acting as a journalist publishing information about the US government that is clearly in the public interest.

But do they really want to put him up on trial?

When US citizen Otto Warmbier died in a wretched North Korean prison cell after being denied proper medical treatment, the western world was disgusted by Pyongyang's disregard for basic human rights. Now we have Julian Assange reportedly too sick to even appear by video at his own court hearings. UN Special Rapporteur on torture Nils Melzer has investigated the treatment of Assange over the past nine years and has determined that the journalist has been the "victim of brutal psychological torture."

UN investigator Melzer concluded, "In 20 years of work with victims of war, violence and political persecution I have never seen a group of democratic States ganging up to deliberately isolate, demonize, and abuse a single individual for such a long time and with so little regard for human dignity and the rule of law."

Governments hate it when the truth is told about them. They prefer to kill the messenger than face the message.

Judge Andrew Napolitano wrote last week that, "the whole purpose of the First Amendment...is to promote and provoke open, wide, robust political debate about the policies of the government."

We need to understand that it is our First Amendment that is on trial right there along with Assange. The Obama Administration, no defenders of civil liberties, wanted to prosecute Assange but determined that his "crime" was the same kind of journalism that the US mainstream media engages in every day.

Let's hope President Trump recovers from his amnesia on the campaign trail -- he praised Wikileaks more than 100 times but now claims to know nothing about them and orders his Attorney General to stand down. Assange deserves our gratitude, not a lifetime in prison.

Related Topic(s): Arrest; Extradition; Julian Assange Imprisonment; Medical; Sunlight; Wikileaks, Add Tags
Add to My Group(s)
Go To Commenting
The views expressed herein are the sole responsibility of the author and do not necessarily reflect those of this website or its editors.