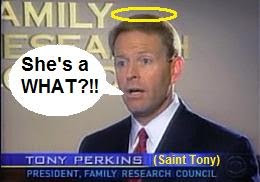 (Image by Unknown Owner)   Details   DMCA
Tony Perkins, the endearing don't-I-look-like-a-choirboy? president of Family Research Council is sizzling over ENDA - the Employment Non-Discrimination Act. He thinks that men will come to work draped in hot pink feather boas and secretaries (his term) will be sporting fake mustaches and sideburns. But most of all, he's bent out of shape because of Amanda Simpson's appointment as Senior Technical Advisor to the Commerce Department. 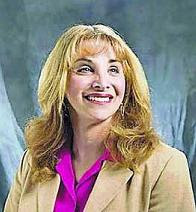 (Image by Unknown Owner)   Details   DMCA
Of course, it makes no difference to people like Perkins that Simpson is almost overqualified for the job: she underwent her sex change over ten years ago while working in Tucson for Raytheon Missile Systems as Deputy Director. BTW: Raytheon is the world's largest producer of guided missiles and the majority of its revenue ($20 billion per annum) is from defense contracts, giving Simpson one hell of a resume (and Perkins one hell of a headache - he can't say she isn't qualified!)

It also doesn't make any difference to Perkins that ENDA has been introduced in every Congress since 1994 (with the exception of 2005-2007 under George W. Bush). Or that the primary goal of ENDA is to curb discrimination in the workplace. Pehaps Tony Perkins thinks he's a prophet of decaying morals: "everyone" will be "potentially" "forced" to hire homosexuals and transgendered people. So the Perkins dog and pony show begins:

"...the Obama Administration dropped another bombshell in its agenda to radicalize America by appointing its first openly "transgender" person to a high federal post.

The day after Simpson began work, The New York Times reported that the main website advertising jobs with the federal government now says there will be no "discrimination" based on "gender identity"-even though Congress has never passed a law saying that.

This new policy applies only to the federal government. But there is a bill being considered in Congress, the so-called "Employment Non-Discrimination Act" (ENDA), which would require every employer in America to open every position to homosexuals (by making "sexual orientation" a protected category) and "transgenders" (by protecting "gender identity"). 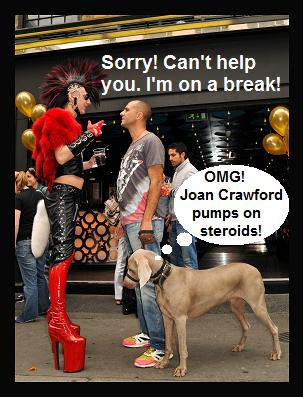 (Image by Unknown Owner)   Details   DMCA
The problem with Tony Perkins' harangue is that the current bill under consideration prohibits employers with 15 or more employees from discriminating on the basis of sexual orientation or gender identity. And exceptions are made for religious organizations, non-profit membership-only clubs and the military (currently covered under DADT). He frequently engenders fear by confusing his faithful, making them think that drag shows will be performed at every company Christmas party. Perkins also inundates the reader with buzz words in his petition to Congress (to be signed by every Right-thinking American in the country):

Please do not tarnish the legacy of the Civil Rights Movement by treating a person's chosen sexual behaviors or their gender self-identification as a protected category in the nation's civil rights laws. The choice to engage in homosexual conduct and the choice to adopt a "transgender" identity (sex change or cross-dressing) are not equivalent to the established (and immutable) protected categories of one's race and biological sex, nor are they protected by the Constitution (as is the freedom of religion, also a protected category).

I urge you to oppose the "Employment Non-Discrimination Act," known as "ENDA," and not to add "sexual orientation" or "gender identity" to America's civil rights laws.

And his "Action Alert" states:

All American employers including Christian owned businesses and potentially Christian ministries would be affected. 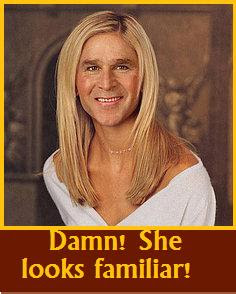 (Image by Unknown Owner)   Details   DMCA
Since he brought up the Civil Rights Movement, is it permissible to ask Mr. Perkins which side of the Movement he would have been on if he was time-warped back to the 60s? A southerner with traditional family values? Take a guess.


Perkins is obviously confused on several points: "Christian ministries" are exempt from the bill and transgender does not necessarily mean "cross-dressers." And if he still wants to go there, studies have shown that most "cross-dressers" are heterosexual men.*

Rev. Dan Vojir is has been writing/blogging on religion and politics for the better part of ten years. A former radio talk show host (Strictly Books " Talk America Radio Network) and book publisher, Dan has connected with some of the most (more...)
Related Topic(s): Civil Liberties; Civil Rights; Discrimination; Drag Queens; Family Research Council; Fear As Policy; Fearmonger; Gender Equality; Sexuality; Transgender; (more...) Transsexuality; Workplace, Add Tags  (less...)
Add to My Group(s)
Go To Commenting
The views expressed herein are the sole responsibility of the author and do not necessarily reflect those of this website or its editors.