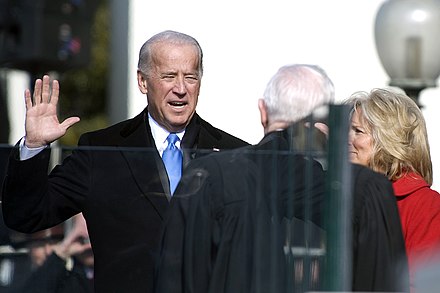 Ol' Joe obviously walked off the inaugural stage with his honeymoon plans well-laid. While I don't personally respect presidential honeymoons for either party, I do try to look at each new president's actions with an open mind and search for the good.

Here are a few high points you may have missed while sipping champagne at an inaugural ball or swilling cheap beer and watching MSNBC:

First, no "national mask mandate." That's a good thing. It indicates an understanding that there are some limits to presidential power. Biden's requiring that masks be worn on federal property and by federal employees, but merely "nudging" Americans to wear masks and leaning on state and local officials to force us to do so.

This could have been far worse. And with trial balloons on re-invoking the Defense Production Act that his predecessor also used to interfere with and screw up the market's response to the pandemic, it will almost certainly GET worse. But it's not worse yet.

Biden came in swinging on immigration. The Obama-Biden administration deported more immigrants than any administration in history including Donald Trump's. Having been nearly out-Democrated by (supposedly former) Democrat Trump on immigration authoritarianism, Biden did a 180. He reinstated the controversial and legally sketchy, but at least not intentionally evil, Deferred Action for Childhood Arrivals program, urging Congress to affirm permanent residency and "paths to citizenship" for the affected folks. He reversed the Trump administration's plans for a fraudulent census excluding non-citizens, nixed Trump's "Muslim ban," stopped construction on Trump's border wall, and round-filed Trump's fake declaration of "emergency" used to misappropriate funds for it.

Hats off to President Biden; all that's a good day's work by itself!

On the environment, Biden's actions were mixed.

He signed a letter of intent to bring the US back into the Paris Climate Accords, a useless treaty that nobody but the US (and probably not the US) ever plans to actually implement, whether its provisions are good ideas or not.

On the other hand, he put the brakes on a couple of high-profile corporate welfare schemes: The Keystone XL pipeline and sweetheart oil and natural gas leases in the Arctic National Wildlife Refuge. Environmentally justified or not, I'm always glad to see government slowing down its giveaways to big business.

No more federal discrimination on the basis of sexual orientation or gender identity. A welcome no-brainer that Republicans should (but probably won't) let shuffle off the culture war battlefield over the next four years.

A couple of lemons: He's extending the national eviction moratorium (apparently already forgetting about those limits on presidential power), and still toying with direct action on student loan debt instead of pushing Congress to change bankruptcy laws to discharge that debt.

But in places Joe Biden's first day was darn good, and it certainly could have been far worse.

Related Topic(s): Executive Orders; Joe Biden, Add Tags
Add to My Group(s)
Go To Commenting
The views expressed herein are the sole responsibility of the author and do not necessarily reflect those of this website or its editors.