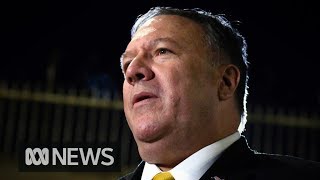 The Congress has over the years surrendered so much of its authority to check-and-balance presidents and their cabinet picks that it is perhaps unsurprising that some commentators were taken aback when Congressional Progressive Caucus co-chair Mark Pocan got serious about holding the Trump administration and its appointed henchmen to account for obstructing the impeachment inquiry.

Pocan's response was certainly bold. After someone at the State Department -- presumably Secretary of State Mike Pompeo -- blocked congressional testimony by a key witness to the president's scheming to strong-arm the Ukrainian government into investigating former vice president Joe Biden, Pocan pushed back with a proposal to withhold the salary of the obstructionist. Or obstructionists.

That's a blunt response, but not an unreasonable one. It's rooted in respect for the system of checks and balances as it was originally outlined in the Constitution.

The system only works when the branches of government cooperate with one another. And, this week, the executive branch refused to cooperate.

European Union Ambassador Gordon Sondland, a Trump campaign donor who was awarded an ambassadorship, not because of his competence but because he wrote big checks, was supposed to provide testimony last week to the House Intelligence Committee. That testimony was blocked at the last minute as part of what was portrayed as a move by the administration to "declare war" on the impeachment inquiry. That sparked an immediate outcry over White House and State Department obstruction of the inquiry, and this outcry will only get louder following Friday's testimony by former US ambassador to Ukraine Maria Yovanovitch that she was removed from her position because of pressure Trump placed on the State Department.

Sondland has indicated that he wants to testify next week. But the prospect that Pompeo and the Trump cabal within the State Department may continue their stonewalling is real. It demands a real response. And Pocan is providing it.

Related Topic(s): Congress; Government; President; Trump; Withhold Pay, Add Tags
Add to My Group(s)
Go To Commenting
The views expressed herein are the sole responsibility of the author and do not necessarily reflect those of this website or its editors.