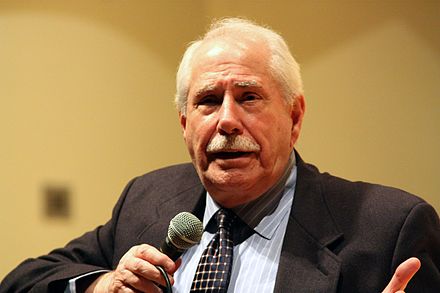 Sen. Mike Gravel is close to qualifying for the Democratic debates - he is currently only 10,000 unique donors away from the requirement of 65,000 unique donors needed. If you have not already donated to his campaign, a donation of just $1 qualifies you as a unique donor.

Sen. Gravel represented Alaska as a Democrat from 1969 to 1981. During his time in the Senate, he was noted for his unabashed opposition to the Vietnam War and for reading the Pentagon Papers into the Congressional Record, risking expulsion from the Senate.

Donate $1here if you'd like to see Mike Gravel on the debate stage, moving the conversation to the left.

Born in Springfield, Massachusetts to a humble family, Gravel served in the military for three years, achieving the rank of First Lieutenant. After his military service, he graduated from Columbia University, paying his way by working as a cab driver and a bar boy. After college, he moved to Alaska without a job or money, working on the railroad as a brakeman. Within six years he was a state legislator; two years later, he became Speaker of the Alaska House of Representatives.

In 1968, Gravel was elected to represent Alaska in the U.S. Senate. He made a name for himself as a fierce opponent of the Vietnam War, urging the U.S. government to end the conflict immediately and stop the bloodshed. In 1971, Daniel Ellsberg approached U.S. senators with a momentous leaked document revealing high-level malfeasance and systematic lying that had resulted in thousands of deaths in Vietnam; if a senator were to read it into the Congressional Record, it could be published widely and avoid censorship. Only Mike Gravel agreed to read it into the record.

On the night of June 29, 1971, Gravel, despite his severe dyslexia, began reading the 4,100 pages of the Pentagon Papers into the Congressional Record, breaking into sobs. "The story is a terrible one," Gravel warned. "It is replete with duplicity, connivance against the public. People, human beings, are being killed as I speak to you. Arms are being severed; metal is crashing through human bodies," he told the press, before reading for several hours straight, reading the report into the Record well after midnight.

In 1981, Sen. Gravel left Washington. In the decades afterward, he worked as an anti-war and pro-direct democracy activist as well as the CEO of several cannabis companies. In 2008, he ran for president, calling for an immediate military withdrawal from foreign countries, recognition of gay marriage, and a Green New Deal. Today, he resides in California with his wife of 35 years, Whitney. He is a proud father and grandfather.

Sen. Gravel is running for president to bring a message of anti-imperialism and direct democracy to the Democratic debates. He is not seeking to contest any primaries, but rather to qualify for the debates, push the field toward sane views on American imperialism and the need for fundamental political reform, and then endorse the most progressive candidate. All campaign staffers are volunteers, and money is only being spent on campaign expenditures (such as airplane tickets and web hosting). All leftover funds will be donated to get clean water for Flint, Michigan.

Related Topic(s): Debate; Mike Gravel; Mike Gravel 2020; Senate, Add Tags
Add to My Group(s)
Go To Commenting
The views expressed herein are the sole responsibility of the author and do not necessarily reflect those of this website or its editors.