Johnnie Lee Savory was first arrested for a double murder he did not commit at the age of 14.  (Juvenile laws?)  His sentence was commuted last year by the Governor of Illinois.  He is now 50 and has spent most of his life in jail.  He is asking the Governor of Illinois to allow DNA tests which he says will fully exonerate him, but Governor Quinn is refusing even though it would cost the state nothing, because supporters will cover the costs.  The New York Times reported in 2009 that prosecutors often block potentially exculpatory DNA tests.

Supporters include five former U.S. Attorneys, authors John Grisham and Studs Terkel.  If you watch no other TV show in 2012, watch this Tavis Smiley episode.  It could change your view of life.  I cried.

"Injustice has touched every man and woman from all walks of life.  Injustice is like a stray bullet. It doesn't care where it lands." -- Johnnie Lee Savory, Forensic Magazine 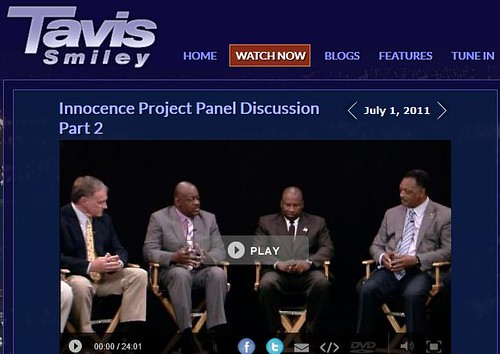 On January 17, 1977, James Robinson, 14, and his 18 year old sister, Connie Cooper, were murdered in their Peoria home. By all accounts, it was a gruesome, senseless waste of life. It is no less to Johnnie Lee Savory. James was a close friend of Johnnie's, a friend with whom he attended school. Grieving for the loss of a close friend at age 14 is painful enough. Imagine the pain in having to fight for you own life in the process. Johnnie Lee Savory was convicted for the murders of his friend and his friend's sister. For 22 years, his life has been a living hell. To fully comprehend Johnnie's misery, you have to look at the facts of the case. He was convicted on one piece of evidence; coerced, inculpatory statements made after hours of grueling interrogation. Statement, which on appeal, the Court deemed never should have been allowed. On January 25, 1977, Johnnie Lee Savory was abducted from his school by the Peoria Police Department, vigorously interrogated, stripped naked so hair sample could be taken from his body, and coerced into confessing to a crime that he had not committed. This confession was the sole piece of evidence the State had to justify their torture of this young boy. There was no physical evidence linking Johnnie to the crime scene.

*According to Police and lab reports, "..fingernail

scrapings (from the right hand of Connie (victim),

"fingerprints found in the home of the victims"

Another startling fact that is unquestionably in Johnnie's favor was the family dog. The presence of the dog in the Robinson's home at the time of the murder alone is proof of Johnnie's innocence. The dog was very protective of James and Connie. He would not let any stranger in the Robinson home. Testimony from the victims mother, stepfather, relatives, and family friends, all affirm the fact that the German Shepherd was ferocious, and affirm that the dog had to be locked away from people whom he did not know.

*Troubleman (the dog) had a record, longer than some

loose in the house when he arrived home and found the

bodies of the victims.

*Peter Douglas told police that the dog would bite a

stranger, therefore the murderer would have had to

been known by the dog to enter the house.  Johnnie's

first visit to the Robinson home was the night before

the murders took place.  At that time, the dog had to

be locked in another room for the duration of the

time Johnnie was in the home.

*Renatta Williams (a family friend) says that the dog

is vicious.  Police say the dog had to be segregated

during the investigation of the crime scene.

*According to one police report, "The dog barked and

Farms salesman delivered a pamphlet to the home.

In 1980 the Illinois Third District Appellate Court ruled that Johnnie's confession was illegally obtained in violation of his state and civil constitutional rights. He was never read his Miranda rights at any time prior to interrogation by Peoria Police and his right to have a parent present during interrogation was denied.

*The State appealed to the Illinois Supreme Court

to overturn the Appellate Court decision"

That Appeal Was Denied!

*The State then appealed to the United States Supreme

"We cannot retry him (Savory) without his statement,

so that's it, he won't be retried again."

"Without it (the confession) there is no substantial

evidence to tie Savory to the crime or the scent of

the crime.  I don't know how it would be possible to

try him without it"

Johnnie returned to Peoria County with absolutely NO EVIDENCE against him. Surprisingly, the State was able to coerce three members of the same family (Frank, Tina, and Ella Ivy) to testify under oath that Johnnie had made admissions to each of them on the day of the murders concerning the deaths of James Robinson and Connie Cooper, adding the Ivy family to the then growing list of victims in order to secure an otherwise nonexistent conviction.

*In 1977, statements taken from the Ivy family made

no mention of Savory's alleged admissions to them

concerning the deaths of the two teenagers.

*During the second trial, Frank Ivy agreed to a taped

interview with Charlie Peters, an investigator from

the Appellate Defender's Office.  During that interview,

Frank admitted that Savory had never made

Any statements concerning the deaths of the victims.

*In a written recantation, Tina Ivy states that she was facing

criminal charges herself, that Johnnie made admissions

of guilt to her on the day of the murders.

Related Topic(s): DNA Evidence; Dna; Dna; Innocence; Innocence Project; Testing; Testing, Add Tags
Add to My Group(s)
Go To Commenting
The views expressed herein are the sole responsibility of the author and do not necessarily reflect those of this website or its editors.