What is exceptional about America is its culture of sadism. 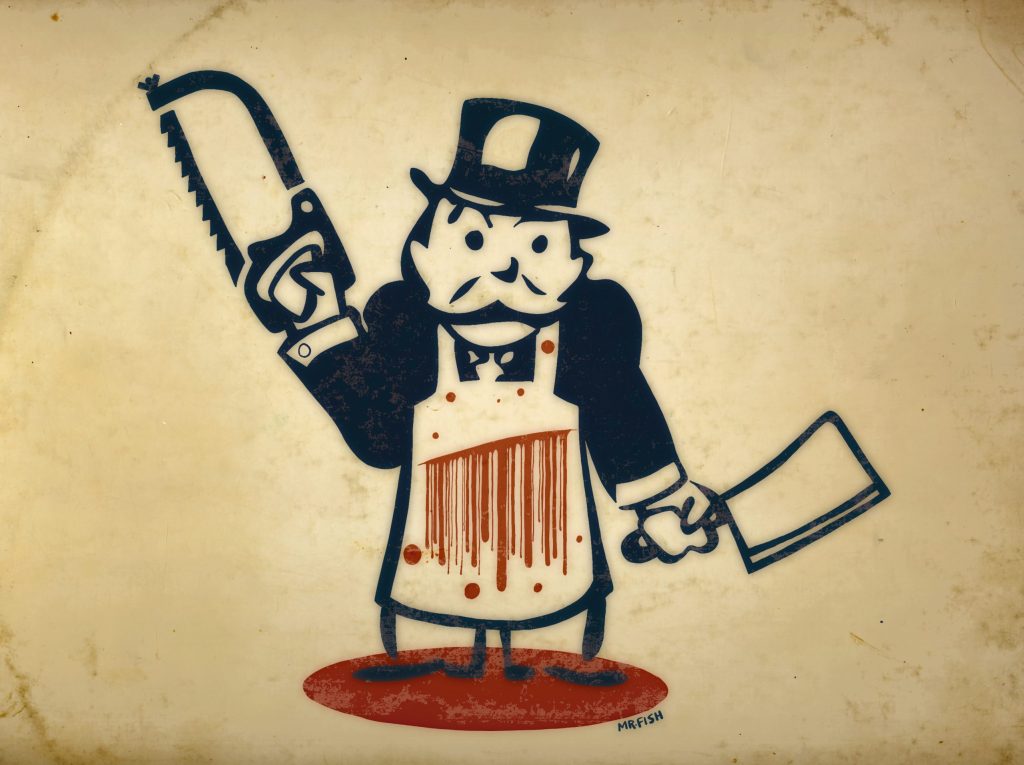 Don't be fooled by Joe Biden. He knows his infrastructure and education bills have as much chance at becoming law as the $15-dollar minimum wage or the $2,000 stimulus checks he promised us as a candidate. He knows his American Jobs Plan will never create "millions of good paying jobs -- jobs Americans can raise their families on" any more than NAFTA, which he supported, would, as was also promised, create millions of good paying jobs. His mantra of "buy American" is worthless. He knows the vast majority of our consumer electronics, apparel, furniture and industrial supplies are made in China by workers who earn an average of one or two dollars an hour and lack unions and basic labor rights. He knows his call to lower deductibles and prescription drug costs in the Affordable Care Act will never be permitted by the corporations that profit from health care.

He knows the corporate donors that fund the Democratic Party will ensure their lobbyists will continue to write the laws that guarantee they pay little or no taxes. He knows the corporate subsidies and tax incentives he proposes as a solution to the climate crisis will do nothing to halt oil and gas fracking, shut down coal-fired plants or halt the construction of new pipelines for gas-fired power plants. His promises of reform have no more weight than those peddled by Bill Clinton and Barack Obama, who Biden slavishly served and who also promised social equality while betraying working men and women.

Biden is the epitome of the empty, amoral creature produced by our system of legalized bribery. His long political career in Congress was defined by representing the interests of big business, especially the credit card companies based in Delaware. He was nicknamed Senator Credit Card. He has always glibly told the public what it wants to hear and then sold them out. He was a prominent promoter and architect of a generation of federal "tough on crime" laws that helped militarize the nation's police and more than doubled the population of the world's largest prison system with harsh mandatory sentencing guidelines and laws that put people in prison for life for nonviolent drug crimes, even as his son struggled with addiction. He was a principal author of the Patriot Act, which began the stripping away of our most basic civil liberties. And there has never been a weapons system, or a war, he did not support.

Nothing substantial will change under Biden, despite the hyperventilating about him being the next FDR. Biden's request for $715 billion for the Defense Department in fiscal year 2022, an $11.3 billion (1.6 percent) increase over 2021, will support the disastrous military provocations with China and Russia he embraces, the endless wars in the Middle East and the bloated defense industry. Wholesale government surveillance will not be curbed. Julian Assange will remain a target. The industries that were shipped overseas and the well-paying unionized jobs will not return. The grinding machinery of predatory capitalism, and the sadism that defines it, will poison the society as mercilessly under Biden as it did when Donald Trump was conducting his Twitter presidency.

The historian Johan Huizinga, writing about the twilight of the middle ages, argued that as things fall apart sadism is embraced as a way to cope with the hostility of an indifferent universe. No longer bound to a common purpose, a ruptured society retreats into the cult of the self. It celebrates, as do corporations on Wall Street or mass culture through reality television shows, the classic traits of psychopaths: superficial charm, grandiosity and self-importance; a need for constant stimulation; a penchant for lying, deception and manipulation; and the incapacity for remorse or guilt. Get what you can, as fast as you can, before someone else gets it. This is the state of nature, the "war of all against all," Thomas Hobbes saw as the consequence of social collapse, a world in which life becomes "solitary, poor, nasty, brutish, and short." And this sadism, as Friedrich Nietzsche understood, fuels a perverted, sadistic pleasure.

The only way out for most Americans is to serve, as Biden does, the sadistic machine. The impoverishment of the working class has conditioned tens of millions of Americans to accept being recruited into the service of the militarized police that function as lethal armies of internal occupation; a military that carries out reigns of terror in foreign occupations; intelligence agencies that torture in global black sites; the government's vast network of spying on the citizenry; the theft of personal information by credit agencies and digital media; the largest prison system in the world; an immigration service that hunts down people who have never committed a crime and separates children from their parents to pack them in warehouses; a court system that condemns the poor to decades of incarceration, often for nonviolent crimes, and denies them a jury trial; companies that carry out the dirty work of evictions, shutting off utilities, including water, collecting usurious debts that force people into bankruptcy and denying health services to those that cannot pay; banks and payday lenders that burden the destitute with predatory, high-interest loans; and a financial system designed to keep most of the country locked in a crippling debt peonage as the wealth of the oligarchic elite swells to levels unseen in American history.

Related Topic(s): America; Biden Appointments; Biden Stimulus Bill; Capitalism; Education; Farmers; Jobs; Police; Sadism, Add Tags
Add to My Group(s)
Go To Commenting
The views expressed herein are the sole responsibility of the author and do not necessarily reflect those of this website or its editors.

(You can only use the social login buttons before entering a comment.)
7 people are discussing this page, with 8 comments