From Scheerposton Hedges: Bless the Traitors

Daniel Hale exposed the widespread and indiscriminate murder of noncombatants in the global US drone war. For his heroism, he faces 10 years in prison while those who oversee these war crimes continue their killing spree. 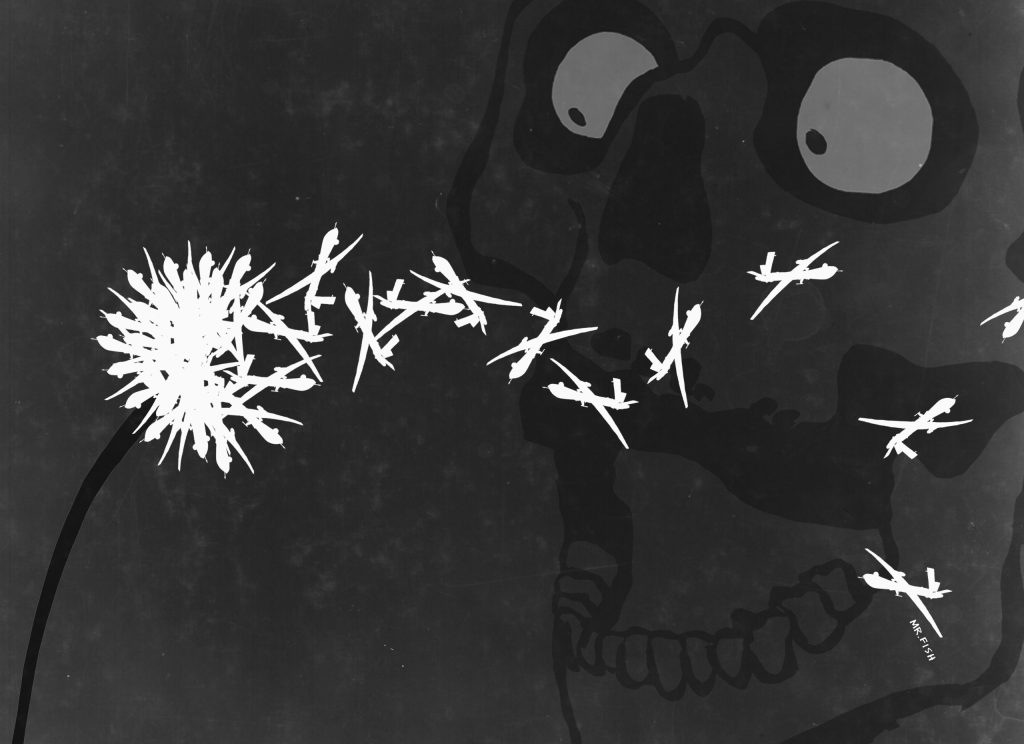 Daniel Hale, an active-duty Air Force intelligence analyst, stood in the Occupy encampment in Zuccotti Park in October 2011 in his military uniform. He held up a sign that read "Free Bradley Manning," who had not yet announced her transition. It was a singular act of conscience few in uniform had the strength to replicate.

He had taken a week off from his job to join the protestors in the park. He was present at 6:00 am on October 14 when Mayor Michael Bloomberg made his first attempt to clear the park. He stood in solidarity with thousands of protestors -- including many unionized transit workers, teachers, Teamsters and communications workers -- who formed a ring around the park. He watched the police back down as the crowd erupted into cheers. But this act of defiance and moral courage was only the beginning.

At the time, Hale was stationed at Fort Bragg. A few months later he deployed to Afghanistan's Bagram Air Force Base. He would later learn that that while he was in Zuccotti Park, Barack Obama ordered a drone strike some 12,000 miles away in Yemen that killed Abdulrahman Anwar al-Awlaki, the 16-year-old son of the radical cleric and US citizen Anwar al-Awlaki, who had been killed by a drone strike two weeks earlier. The Obama administration claimed it was targeting the leader of Al Qaeda in the Arabian Peninsula, Ibrahim al-Banna, who it believed, incorrectly, was with the boy and his cousins, all of whom were also killed in the attack. That massacre of innocents became public, but there were thousands more such attacks that wantonly killed noncombatants that only Hale and those with top-security clearances knew about.

Starting in 2013, Hale, while working as a private contractor, leaked some 17 classified documents about the drone program to investigative reporter Jeremy Scahill, although the reporter is not named in court documents. The leaked documents, published by The Intercept on October 15, 2015, exposed that between January 2012 and February 2013, US special operations airstrikes killed more than 200 people. Of those, only 35 were the intended targets. For one five-month period of the operation, according to the documents, nearly 90 percent of the people killed in airstrikes were not the intended targets. The civilian dead, usually innocent bystanders, were routinely classified as "enemies killed in action."

Hale was coerced by Biden's Justice Department on March 31 to plead guilty to one count of violating the Espionage Act, a law passed in 1917 designed to prosecute those who passed on state secrets to a hostile power, not those who expose to the public government lies and crimes. Hale admitted as part of the plea deal to "retention and transmission of national security information" and leaking 11 classified documents to a journalist. He is being held in the Alexandria Adult Detention Center in Virginia, awaiting sentencing on July 27. If he had refused the plea deal, he could have spent 50 years in prison. He now faces up to a decade in prison.

Tragically, his case has not garnered the attention it should. When Nick Mottern, of the Ban Killer Drones campaign, accompanied artists projecting Hale's image on downtown walls in Washington, D.C., he found that everyone he spoke to was unaware of Hale's plight. Prominent human rights organizations, such as the ACLU and PEN, have largely remained silent and uninvolved. The group Stand with Daniel Hale has called on President Biden to pardon Hale and end the use of the Espionage Act to punish whistleblowers, mounted a letter-writing campaign to the judge to request leniency and is collecting donations for Hale's legal fund.

"Daniel Hale is one of the most consequential whistleblowers," Edward Snowden said on a May Day panel held at the University of Massachusetts-Amherst on the 50th anniversary of the release of the Pentagon Papers. "He sacrificed everything an incredibly courageous person to tell us that the drone war, that, you know, is so obviously occurring to everyone else, but the government was still officially denying in so many ways, is here, it is happening, and 90 percent of the casualties in one five-month period were innocents or bystanders or not the target of the drone strike. We could not establish that, we could not prove that, without Daniel Hale's voice."

Speaking on Democracy Now! with host Amy Goodman a few weeks later, Daniel Ellsberg agreed that Hale "acted very admirably, in a way that very, very few officials have ever done in showing the moral courage to separate themselves from criminal activities and wrongful activities of their own administration, and resist them, as well as exposing them."

Because Hale was charged under the Espionage Act, he, like other whistleblowers, including Chelsea Manning, Jeffrey Sterling, Thomas Drake and John Kiriakou, who spent two-and-a-half years in prison for exposing the routine torture of suspects held in black sites, was not permitted to explain his motivations and intent to the court. Nor could he provide evidence to the court that the drone assassination program killed and wounded large numbers of noncombatants, including children. He faced trial in the Eastern District of Virginia, much of whose population has links to the military or intelligence community, and whose courts have become notorious for their harsh sentences on behalf of the government.

The 2012 "Living Under Drones" report by the Stanford International Human Rights and Conflict Resolution Clinic provides a detailed documentation of the human impact of US drone strikes in Pakistan. Drones often fire Hellfire missiles that are equipped with an explosive warhead of about 20 pounds. A Hellfire variant, known as the R9X, carries "an inert warhead," The New York Times reported. Instead of exploding, it hurls about 100 pounds of metal through a vehicle. The missile's other feature includes "six long blades tucked inside," which deploy "seconds before impact to slice up anything in its path" including, of course, people.

The numbers of civilian dead from US drone strikes run into the thousands, if not tens of thousands. The Bureau of Investigative Journalism (TBIJ), an independent journalist organization, for example, reported that from June 2004 through mid-September 2012, drone strikes killed between 2,562 and 3,325 people in Pakistan, of whom an estimated 474 to 881 were civilians, including 176 children.

Drones hover 24 hours a day in the skies over Iraq, Somalia, Yemen, Afghanistan, Pakistan and Syria. Without warning, the drones, operated remotely from Air Force bases as far away as Nevada, fire ordinance that obliterates homes and vehicles or kills whole groups of people in fields or attending community gatherings, funerals and weddings. The leaked banter of the young drone operators, who often treat the killings as if they are an enhanced video game, exposes the callousness of the indiscriminate killings. Drone operators refer to child victims of drone attacks as "fun-sized terrorists."

Related Topic(s): David Hale; Drone; Killing; Murder; Traitors; Whistleblower, Add Tags
Add to My Group(s)
Go To Commenting
The views expressed herein are the sole responsibility of the author and do not necessarily reflect those of this website or its editors.