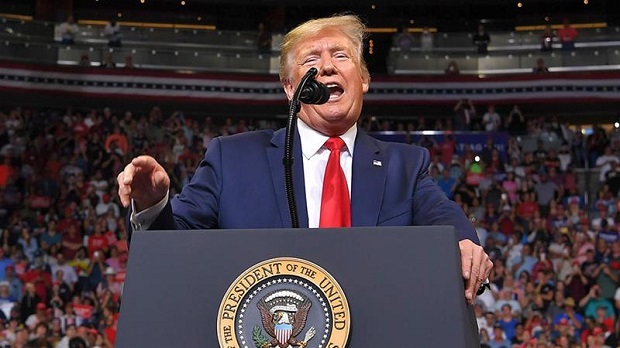 US President Donald Trump told thousands of Israel's supporters at a rally in Florida at the weekend that some American Jews 'don't love Israel enough'
(Image by themorning.lk)   Details   DMCA

US President Donald Trump told thousands of Israel's supporters at a rally in Florida at the weekend that some American Jews "don't love Israel enough". It is certainly troubling that a US president insists a section of his country's citizens the Jewish population be required to love a foreign state. But then Trump went further, muddying the waters about what constitutes "Israel".

Echoing remarks made last month by Mike Pompeo, his secretary of state, he described the Jewish settlements in the West Bank as legal thereby subverting a long-established principle of international law.

US Jews and the rest of us, it seems are expected not only to love Israel inside its internationally recognised borders but also to love the Jewish settlements that international law designates as a war crime. Those are the same settlements eating up ever more of the territory supposed to form the basis of a Palestinian state.

When Trump, like his predecessors, told his weekend audience that the US shared an "unbreakable" bond with Israel, what exactly was the "Israel" he referred to? Both the US and Israel have implied in recent declarations and actions that a central plank of the long-delayed Trump peace plan will be Israel's annexation of the settlements and with them most of the West Bank.

"Loving Israel" now is meant to include abandoning any hope of Palestinian statehood and accepting that Palestinians will live permanently under an Israeli version of apartheid, with inferior rights to Jews.

The Trump administration seems keen to press ahead with the peace plan and annexation but is being hampered by political chaos in Israel.

Mired in corruption scandals and having staged two inconclusive elections this year, Benjamin Netanyahu, the caretaker prime minister, is unable to cobble together a coalition to keep himself in power. The impasse is not over the occupation or the settlements but about who gets to dominate the next government: far-right religious settlers led by Netanyahu or right-wing, secular former army generals?

Nonetheless, Netanyahu is behaving as if Washington has given its blessing to annexation even without a US peace plan.

That was what Pompeo's statement last month backing the settlements amounted to. He offered one paltry safeguard, investing responsibility for monitoring and limiting settlement expansion in Israel's supreme court. But this is the same court that has consistently failed to block settlement growth over five decades. It now includes two judges who actually live in settlements, as well as others who sympathise politically with the settlement project.

Meanwhile, in preparation for a likely third election campaign, the interim Netanyahu government has announced a splurge of new settlement building and boosted settler budgets.

In another fillip for the settlers last month, Netanyahu appointed one of their leaders, Naftali Bennett, to the sensitive role of defence minister. Bennett lost no time in unveiling his latest settlement plan last week, selecting an incendiary spot greatly prized by the settlers: the middle of Hebron, the West Bank's largest Palestinian city.

For decades, life for Hebron's 230,000 Palestinians has been forced to a virtual standstill by a few hundred Jewish religious extremists who have taken over the city centre, backed by more than 1,000 Israeli soldiers. Their ultimate goal is to wrestle away the city's Ibrahimi mosque, the reputed burial site of Abraham, father of the world's three main monotheistic religions.

After Baruch Goldstein, a settler, shot dead and wounded some 150 Muslim worshippers in 1994, Israel rewarded the settlers twice over.

First, it segregated the mosque site, splitting it into two. Half is now the Jewish Tomb of the Patriarchs. But in practice the Israeli army enjoys absolute control over who can pray there.

And next, Israel declared the surrounding area, including Hebron's main commercial market, a closed military zone, thereby forcing the Palestinian merchants out. It has been a ghost town ever since, serving as a passageway between the settlement enclaves and the mosque.

For years, the closed market has stood as a potent, silent symbol of the way Israel has been tearing the city apart.

In February, Netanyahu gave the settlers another boost. He shuttered the international observer mission in Hebron, there to witness and record the abuse of Palestinians, especially at the checkpoints that litter the city centre. But still the settlers were not satisfied. They have long wanted to take over the Hebron market for themselves, to expand their enclaves.

So last week, Bennett granted their wish. He announced plans to destroy the market to make way for a settlement serving effectively as a bridge between the existing enclaves and the mosque site. The plan will double the number of settlers in Hebron and complete a wall of Jewish settlement dividing the city in two. This week Palestinian leaders called a citywide strike in protest.

As ever, the Israeli government has tried to put a surreal legal gloss on its criminality, apparently to spare the blushes of its US and European allies. Bennett's advisers have insisted that Israel has legal title to the air above the roofs of the empty shops. This is where the settlers will supposedly be housed, after the shops have been demolished and rebuilt to support the new apartment blocks.

It emerged this week that Bennett had threatened Hebron's municipality, warning it would lose property rights to the shops area too if it did not consent to the settler homes above.

Israel is reminding Palestinians that there are now no limits military, legal, moral or diplomatic to the settlers' power. Israel will annex land where it chooses and deceptively refashion the resulting apartheid system as the rule of law.

The material losses to the Palestinians from Israel's ever-growing settlement enterprise are devastating enough. This month, the United Nations Conference on Trade and Development issued a report estimating conservatively that the past 17 years of occupation alone had cost the Palestinians a whopping $48 billion three times the current size of its economy.

That income would have generated two million job opportunities, freeing Palestinians from a miserable choice between life without work and, if they are issued a permit by Israel, precarious, exploitative casual labour in Israel or the settlements.

Equally significantly, the ever-expanding settlements have stripped Palestinians of their most basic freedoms, such as movement, and undermined their security and right to be treated with dignity.

And no one ought to love that.