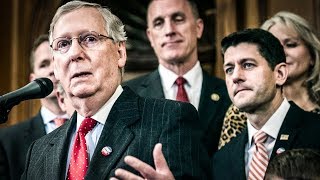 State health officials throughout the United States are preparing for major cutbacks or outright shutdown of the Children's Health Insurance Program (CHIP). The plans are going forward despite stopgap legislation enacted by Congress December 21 and signed into law by President Trump that supposedly averted an immediate collapse of CHIP, which provides health care coverage for nine million low-income children.

In Colorado, Connecticut, Utah and Virginia, state agencies sent out letters notifying families of children enrolled in CHIP that the program is likely to terminate January 31 without additional congressional action. The state of Alabama delayed its own shutdown -- originally set to begin January 1 -- until the end of the month.

The legislation passed last week provides only a short-term patch to the program, funneling $2.85 billion into CHIP through March 31. This is entirely inadequate, since funding authorization expired September 30, at the end of the last fiscal year, and full annual funding would require $16 billion, or about $4 billion every three months. That means the $2.85 billion does not even cover spending for the October through December period, let alone the first three months of 2018.

The Centers for Medicare and Medicaid Services (CMS), which manages the allocation of CHIP funds to the states, has averted the program's shutdown so far by shuffling funds from states with temporary surpluses to those which were imminently running out of cash. The imbalances between states are themselves a product of the patchwork character of CHIP, which is treated by some states as part of Medicaid, and by others as a free-standing program.

The redistribution of funds between states can only go so far, and ultimately has the effect of bringing forward a nationwide collapse of the entire program, since all states will now run out of funds more or less simultaneously. According to a report by Georgetown University released last week, 25 states will run out of funds during the month of January and six more during the month of February.

In some states, funding will dry up even before beneficiaries and providers can be properly notified, since IT systems that handle the payment of benefits have to be reprogrammed and websites updated. Some states cannot meet the required 30 days of advance notice to families that their benefits are being terminated.

In some cases, states plan to dump families into the Obamacare exchanges, which, even if they can find an insurance plan, will cost much more. CHIP caps cost-sharing like deductibles and premiums at 5 percent of a family's income, but there is no such ceiling on the cost of insurance on the exchanges.

The passage of a supposed temporary "fix" to the CHIP funding crisis that actually resolves nothing -- and may bring forward the total collapse of the program -- is an indictment of the congressional Democrats as well as the Republicans and the Trump White House.

The year-end continuing resolution required a 60-vote margin to pass the Senate, where the Republicans control only 52 votes, giving the Democratic caucus significant leverage in how to structure the legislation. On the two most salient issues -- extension of CHIP and protection for immigrant children under DACA -- the Democrats caved in and essentially did the bidding of the Republican majority.

Moreover, many of the state governments that are implementing the CHIP cuts, including three of the four states (Colorado, Connecticut and Virginia) that have recently sent off mass cutoff notifications, are under Democratic Party control. At the state level, both capitalist parties are pursuing austerity policies with a vengeance.

There are many additional cuts in health care coming in the New Year, some incorporated in the continuing resolution passed by the House and Senate to fund the federal government through January 19, others being enacted by state governments on their own authority, using the "flexibility" provided by executive order from the Trump administration.

* One provision takes $750 million out of the Affordable Care Act's Prevention and Public Health Fund to pay for community health centers and other programs that would otherwise have been defunded, essentially robbing Peter to pay Paul.

Patrick Martin writes for the World Socialist Website (wsws.org), a forum for socialist ideas & analysis & published by the International Committee of the Fourth International (ICFI).
Related Topic(s): CHILDRENS HEALTH CARE; Congress; Health Care Costs; Republican; Shutdown, Add Tags
Add to My Group(s)
Go To Commenting
The views expressed herein are the sole responsibility of the author and do not necessarily reflect those of this website or its editors.