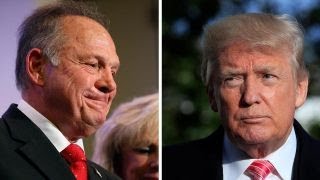 Headlines typically attempt to draw in readers by including the most relevant or pertinent information, but in the case of breaking news Monday that President Trump had endorsed Roy Moore in next week's Senate special election in Alabama, the single most important fact of the case -- that Moore faces multiple sexual abuse charges -- was omitted by the majority of outlets altogether.

The fact that a Republican president would endorse a Republican for a Senate race is not really news. Under normal circumstances, it would be hardly worth a mention...but these aren't normal circumstances. What makes it news -- what justifies the entire reporting of the story -- is that Trump is backing someone accused by multiple people, backed by years of circumstantial evidence, of sexual assault and child sexual abuse. The far more relevant framing is "Trump Backs Alabama Senate Candidate Accused of Sexual Abuse." That's what makes it a story.

Those that do mention the abuse often used a vague "sex allegation" framing. The instinct to downplay the charges can be seen in two New York Daily News headlines (12/4/17). When the story is viewed full-sized, it has the awkward, redundant headline, "Trump Officially Endorses Roy Moore, Despite Sexual Allegations Claims, With 'Go Get 'Em, Roy' Message." When the window is reduced, however, the story bears the more accurate headline, "Trump Endorses Moore Despite Sex Assault Claims."

As Mary Elizabeth Williams explained (Salon, 6/29/12) in 2012, referring to sexual assault or attempted child rape merely as "sex" flattens the predatory nature and severity of the crime:

"A sex scandal is Mark Sanford ditching his state to cavort with his mistress. A sex scandal is Tiger Woods and a waitress... But when the media uses the word 'sex' within a story about something where there are alleged victims of assault, it's a semantic failure on an epic scale. It diminishes crime. It sensationalizes it. It removes the distinction between a normal, consensual act and violence."

Related Topic(s): Abuse Of Power; Headlines; Pedophilia; Republican; Roy Moore; Sexual Misconduct, Add Tags
Add to My Group(s)
Go To Commenting
The views expressed herein are the sole responsibility of the author and do not necessarily reflect those of this website or its editors.