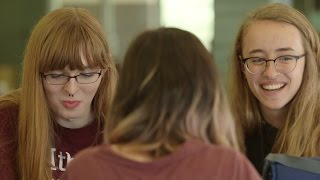 Beyond Bathrooms: The Transgender Student Experience The battle over bathroom access for transgender students is heating up. The U.S. departments of Justice and Education issued a directive last month for the ...
(Image by YouTube, Channel: Education Week)   Details   DMCA

What to make of some "things" in the corporate MSM, internet sites and social media apps.

To wit: This "thing" over sexuality one reads about. The political correctness associated with it. Sure there shouldn't be discrimination toward anyone however they want to depict themselves. But to dwell on rest room use, that somehow men's room and women's room are insufficient and discriminate against transsexual's who prefer to dress in the opposite sex they were born and want to use the men's or women's restroom of their preference. Who cares? What's the big deal? Is potty use something of a critical issue?

Then there's Greta Thunberg, the Swedish 16 year old seeming priestess of the environmentalism movement who sounds more like a cult leader sneering at and denouncing governments and its officials for leading the world toward environmental armageddon and stealing her generations youth in the bargain.

Now to be sure the world's leaders and their governments have not taken sufficient steps to ameliorate man made climate change. But public shaming isn't going to get them to do anything more. If anything her strident demeaning could make them do less.

From here worldwide massive protests and demonstrations by millions of people demanding their governments work together is the way-maybe the only way-to bring manmade climate change under control. To believe Thunberg is the figure to bring diverse people's in the world over to her cause is the way...well good luck with that.

Here's another item read yesterday. A British pop star named Lily Allen said people shouldn't be singing the British National Anthem "Rule Britannia" anymore because of its colonial and slavery connotations. No doubt the anthem does relate to former British imperialism. But Britain hardly rules the waves anymore and long ago dissolved its empire. If she opposes the anthem maybe she shouldn't sing it or stand before it. But to invoke her opinion as to what all British people should do is nonsense.

Why doesn't Allen focus on the UK being a vassal to the US empire across "the pond". As in siding with US aggression in Iraq, Afghanistan, supporting mercenary jihadists in Syria, siding with the US supplying and supporting Saudi Arabia in its aggressive war in Yemen.

Maybe in our "western" culture with its proliferation of social media seemingly dominating many people's attention, maybe their paying attention to the sexuality of others, a 16 year olds snarling at world leaders, or a pop star blathering over her nations anthem is what so many people are interested in.

Politically look what transpires as legislative activity in the so called peoples House of Representatives, the impeachment inquiry-inquisition?- of President Trump.

Sure Trump's a horror, self important narcissist, tweeting fool who overreacts to any slight, is known to stiff contractors who have done work on some of his commercial development projects and most probably there's obvious conflict of interest inviting foreign statesmen to his hotels to conduct government business.

To the Dems Trump is evil personified, thus their Joe McCarthy type "inquisition"? and push for his impeachment. Even if that happens the Repubs. in the Senate would never vote to convict him plus their inquiry could divulge Dems suspect activities before the impeachment inquiry.

The "thing" is we face real problems and issues in this country some of which have been brought up by a few Dems running for the Democratic presidential nomination namely Tulsi Gabbard, Bernie Sanders and Elizabeth Warren.

Only the chance of any of these problems and issues or the multitude of others being rectified is slim and none even if any of the aforementioned get elected president. That's not being pessimistic. It's being realistic.

Retired. The author of "DECEIT AND EXCESS IN AMERICA, HOW THE MONEYED INTERESTS HAVE STOLEN AMERICA AND HOW WE CAN GET IT BACK", Authorhouse, 2009
Related Topic(s): Apps; Internet; Issues; Men; People; Sexuality; Transgender; Women, Add Tags
Add to My Group(s)
Go To Commenting
The views expressed herein are the sole responsibility of the author and do not necessarily reflect those of this website or its editors.