As with so many things, Californians are going first where the rest of us will follow 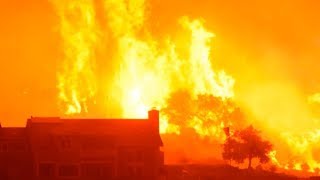 Monday morning dawned smoky across much of California, and it dawned scary over the weekend winds as high as a hundred miles an hour had whipped wildfires through forests and subdivisions.

It wasn't the first time this had happened indeed, it's happened every year for the last three, and this time the flames were licking against communities destroyed in 2017. Reporters spoke to one family that had moved into their rebuilt home on Saturday, only to be immediately evacuated again.

That is to say, precisely the kinds of homes that today are small piles of ash with only the kidney-shaped pool intact.

Bill McKibben is the author of a dozen books, including The End of Nature and Deep Economy: The Wealth of Communities and the Durable Future. A former staff writer for The New Yorker, he writes regularly for Harper's, The Atlantic Monthly, and The (more...)
Related Topic(s): California Fires; Climate Crisis; Drought, Add Tags
Add to My Group(s)
Go To Commenting
The views expressed herein are the sole responsibility of the author and do not necessarily reflect those of this website or its editors.