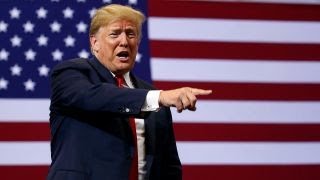 As the United States lurches toward its 2020 presidential election cycle, it is useful to revisit the central tension of Donald Trump's presidency. I'm speaking, of course, about his phony populism and the politico-financial establishment's utter contempt for his political ascent. As the Democratic field slowly takes shape, the question now is whether the ruling class has finally had enough.

This is not to suggest that these elites dislike Trump for the same reasons a Truthdig reader might. Those who stand atop the nation's power structures have long been comfortable with American corruption, patriarchy, racism and outright sociopathy. For evidence, look no further than the disparate presidencies of the so-called American century.

No, what's different and problematic for our country's oligarchs is that while the presidency has long served America's imperial interests, it has typically done so while purporting to stand for something more noble. The U.S. government and, above all, its executive branch, are expected to masquerade as forces for "good" -- democracy, liberty and peace, at least in the abstract, and an outwardly multilateralist management of world affairs.

Bill Clinton and Barack Obama, both Ivy League law school graduates, were skilled and telegenic masters of that ruse. Even the comparatively dimwitted George W. Bush had the basic courtesy to cover his hideous machinations in Iraq with the rhetoric of freedom. "Dubya" knew better than to openly and theatrically boast of U.S. arms sales to the murderous and absolutist rulers of Saudi Arabia.

Trump is a new and different kind of presidential animal. He makes no pretense of himself, the presidency or the United States being about anything more than mercenary and socio-pathological self-interest. He gives not one flip about racial and ethnic diversity, equality or the state of global affairs, much less the fate of our planet.

The president adamantly refuses to pretend that he, his office or the nation he represents lay any special claim to the notions of dignity or integrity. He eschews civility and graciousness, instead basking in an Archie Bunker-like disregard for political correctness. And he continues to use his Twitter account to pounce on his perceived personal and political enemies, turning Washington into an "Apprentice"-style (un)reality show.

Trump embodies what we might call American unexceptionalism, behaving like one of the bizarre and petulant Third World dictators the U.S. has long sponsored around the world.

But beyond being bad for the brand, Trump brazenly flouts ruling-class institutions and conventions. He does not consult the Council on Foreign Relations, the Atlantic Council, the Wilson Center or the Brookings Institution on foreign or domestic policy. He doesn't read policy briefs or white papers from establishment think tanks.

Instead, he prefers to take advice from fellow wacky billionaires and right-wing media personalities with whom he regularly consults by phone late at night, alone in his bedroom, or via Fox News. He claims to know more about developments in other nations than his own top generals and spooks.

It is unimaginable that any previous U.S. president would have defied his own intelligence agencies' finding that Saudi Crown Prince Mohammed bin Salman ordered the killing of Saudi dissident and Washington Post journalist Jamal Khashoggi. Or stood next to Vladimir Putin in Helsinki to say that he believed the Russian president -- and not the CIA -- when he said that Russia did not interfere in the 2016 U.S. presidential election.

Neither would any previous American president have deployed troops to the southern border in a transparent attempt to rally Republican voters on the eve of a midterm election. Or shut down the federal government, possibly "for years," in Trump's words, if Congress doesn't give him the money to build a useless wall along the U.S.-Mexico border.

Ultimately, Trump is the first man to ascend to the post-WWII U.S. presidency from outside the global consensus. In and of itself, that has been an incredible development, bothersome indeed to the United States' economic and military establishment. (The bad news, for the rest of us, is that he emerged from the white nationalist right rather than the egalitarian and social democratic left.)

Still, there are real limits to the establishment's discomfort with Trump, who has been useful to the nation's rulers and owners in four key ways.

Paul Street (www.paulstreet.org and paulstreet99@yahoo.com) is the author of Empire and Inequality: America and the World Since 9/11 (2004), Racial Oppression in the Global Metropolis (2007), Barack Obama and the Future of American Politics (more...)
Related Topic(s): Class Politics; Corporate; Corruption; Economic; Impeachment; Markets; Ruling Elites, Add Tags
Add to My Group(s)
Go To Commenting
The views expressed herein are the sole responsibility of the author and do not necessarily reflect those of this website or its editors.