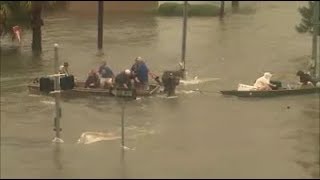 NOW IS EXACTLY the time to talk about climate change, and all the other systemic injustices -- from racial profiling to economic austerity -- that turn disasters like Harvey into human catastrophes.

Turn on the coverage of the Hurricane Harvey and the Houston flooding and you'll hear lots of talk about how unprecedented this kind of rainfall is. How no one saw it coming, so no one could adequately prepare.

What you will hear very little about is why these kind of unprecedented, record-breaking weather events are happening with such regularity that "record-breaking" has become a meteorological cliche. In other words, you won't hear much, if any, talk about climate change.

This, we are told, is out of a desire not to "politicize" a still unfolding human tragedy, which is an understandable impulse. But here's the thing: every time we act as if an unprecedented weather event is hitting us out of the blue, as some sort of Act of God that no one foresaw, reporters are making a highly political decision. It's a decision to spare feelings and avoid controversy at the expense of telling the truth, however difficult. Because the truth is that these events have long been predicted by climate scientists. Warmer oceans throw up more powerful storms. Higher sea levels mean those storms surge into places they never reached before. Hotter weather leads to extremes of precipitation: long dry periods interrupted by massive snow or rain dumps, rather than the steadier predictable patterns most of us grew up with.

The records being broken year after year -- whether for drought, storm surges, wildfires, or just heat -- are happening because the planet is markedly warmer than it has been since record-keeping began. Covering events like Harvey while ignoring those facts, failing to provide a platform to climate scientists who can make them plain, all while never mentioning President Donald Trump's decision to withdraw from the Paris climate accords, fails in the most basic duty of journalism: to provide important facts and relevant context. It leaves the public with the false impression that these are disasters without root causes, which also means that nothing could have been done to prevent them (and that nothing can be done now to prevent them from getting much worse in the future).

Related Topic(s): Climate Change; Disasters; Harvey Flood, Add Tags
Add to My Group(s)
Go To Commenting
The views expressed herein are the sole responsibility of the author and do not necessarily reflect those of this website or its editors.