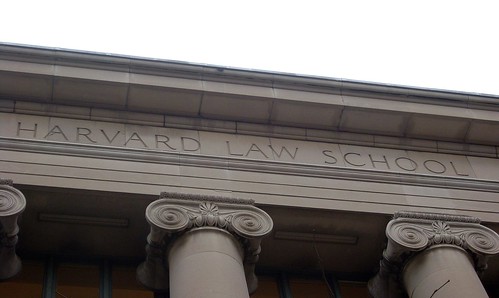 Harvard Law School professors love to use hypotheticals in their classes. So let's try one that they have not subjected their students to in its 200 years of storied history. What if the Law School split itself into two parts -- each with different professors and students on its crowded campus in Cambridge, Massachusetts? One half would retain the name Harvard Law School, while the other half would be called Harvard Lawless School. How would the courses differ?

Well, the Harvard Law School curriculum would remain pretty much the same, accepting the law as is, working its interpretation by courts, regulators and legislatures and speculating a little about how it could be clarified and improved.

Harvard Lawless School would be more grounded in grim realities, where there are no operating laws to discipline raw power or where the laws are so violated as to be systematically inoperative over a large range of activities.

Lawlessness, the kind that is considered as factual non-compliance with existing law, is often far more widespread than the studied phenomenon known as compliance.

I am reminded of the long history of this duality by in a 1932 review by Daniel James of The Modern Corporation and Private Property -- a famous book by Adolf A Berle, Jr. and Gardiner C. Means that documented the split between ownership (the shareholders) and control (by the corporate executives). He wrote then what is worse now, that "There is a paper government for corporations and there is an actual government. The one is embodied in Constitutional provisions, statutes, charters, by-laws, decisions; the other has its being in the conduct of men who control corporate activity"With them as with all human institutions there is a divergence of the intended and the realized, the ought and the is."

The "is", declared Mr. James, is "made up of blunt, realistic facts" which is what Harvard Lawless School would teach and take off from.

What's all this got to do with you? Just about everything. If you cannot use the law to pursue your rights -- say health coverage -- under fine-print contracts or gain adequate compensation for your wrongful injuries, you are being strapped by lawlessness through the design of the power elites. They, of course, live under their own rules -- monetarily greased through their plunder of the political economy -- and, not surprisingly, use these special rules to their advantage in ways that disadvantage you and most other people.

Business crooks get away with over $300 billion a year just in computerized billing fraud and abuse in the healthcare industry, despite the existing laws against fraud. Starvation enforcement budgets for the federal cops on the corporate crime beat are allocated by an indentured Congress. Thus, a routinely vast area of theft and harm drives a political climate of lawlessness and exacerbates crime in the suites.

When Congress cuts the IRS's budget year after year, the agency cannot collect what it estimates is over $450 billion a year in "uncollected taxes." Add additional massive sums of "avoided taxes" by corporate lobbyists driven through a greased Congress, and you end up paying more taxes, or receiving fewer public services or incurring larger government deficits. Huge sums of money are outside the tax laws.

As the protections of tort law -- the law of wrongful injuries -- are diminished, millions of Americans are left outside the civil justice system -- unable to hold perpetrators accountable. The forced under-utilization of consumer, environmental and worker protection laws by their supposed beneficiaries against violators is overwhelmingly the norm.

Expanding areas of lawlessness flow wildly from existing laws. Criminal wars of choice, mass government surveillance, the tortures and the licenses accorded military contractors are examples of rampant lawlessness. Wars of aggression (Iraq, Libya) are not declared, the Fourth Amendment to the Constitution is violated routinely, torture and unlawful imprisonment (euphemistically called 'detention') are the stuff of media exposes that go nowhere.

Domestically, using the law itself as an instrument of oppression, prosecutorial abuses, police and prison lawlessness and entrenched procurement violations between vendors and governments are institutionalized dimensions of lawlessness. There are unconstitutional laws that need amendment or repeal.

Who enforces the legal boundaries on the Federal Reserve, whose widening unaccountable penumbras of lawless discretion are worrying Right and Left in this country. Then Secretary of the Treasury Henry Paulson told the Washington Post that he had "no authorities" to engage in his serial bailouts of Wall Street, but somebody had to do it.

There are no international laws regarding the ongoing, growing cyberwarfare; no laws governing the tumultuous nanotechnology, few rules that can contain the spread of migrating, untested biotechnology.

When at least 250,000 Americans can die yearly (about 700 a day!) because of medical malpractice, medical error , hospital-induced infections and mis-prescription of medicines and their lethal side-effects, there clearly is no "rule of law" applicable in this realm of preventable mass violence having any quantitative significance.

Ralph Nader is a consumer advocate, lawyer, and author. His most recent book - and first novel - is, Only The Super-Rich Can Save Us. His most recent work of non-fiction is The Seventeen Traditions.
Related Topic(s): Harvard Law School; Law; Rules; Ruling Elites, Add Tags
Add to My Group(s)
Go To Commenting
The views expressed herein are the sole responsibility of the author and do not necessarily reflect those of this website or its editors.