For eight hellish years, Bush and Cheney ruled America by fear. Images of Osama Bin Laden were drawn on us like weapons. Terror. Terrorism. Terrorists. War. Fear. Warfare. This was the Bush/Cheney mantra that kept Americans in despair.

Today, as a result of their tactics, our nation is in tatters, with wars not jobs, bombs not books, and warfare not health care. America lacks the resources to confront dangers that have nothing to do with bin Laden: hurricanes, oil spills, floods, tornadoes, unfunded education, decaying infrastructure, exorbitant health costs, corporate greed, and more. Because of partisan politics and hawks like California Congresswoman Harman, more dollars are spent on unending wars than are spent on education. Perhaps you've seen this expenditure chart based on our 2009 tax allocation: 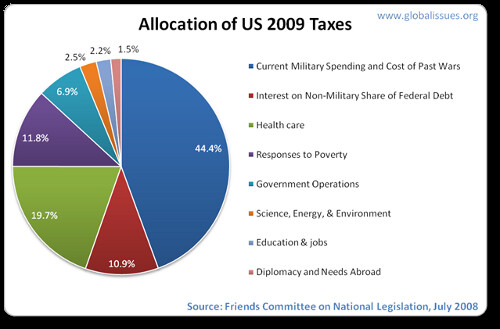 (Image by Unknown Owner)   Details   DMCA
Sad, isn't it, that over 44% of our money is spent on the military and wars. Most painful for me is our inferior education and how young people can't go to college. Again we can thank the war-supporters like Harman for getting us in this debacle.

One would have hoped Bush and Cheney's terror-filled tack would have ended with their regime - but it didn't. It continues on with Jane Harman. Witness for yourselves her fear-based ad, replete with Osama bin Laden, directed at Marcy Winograd, Harman's progressive opponent, and the voters of California's 36th Congressional District:

How could this video possibly represent Harman's district? Is bin Ladin foreclosing on homes? Is he taking the jobs? Is he firing teachers? Why is bin Ladin in this video, or Israel, or discussion of nuclear weapons?

Harman is out of touch. She's the richest woman in Congress. Every two years she re-buys her seat and indulges her personal passions: war, war-technology and war-intelligence. She was briefed on Bush's warrantless wiretap program and urged the New York Times not to report it. She even got herself ensnared in it, getting wiretapped by the NSA, accused of colluding with an Israeli agent. Think I'm kidding? Read here, then be sure to read the comments. They're blistering. Americans don't like Jane Harman's hubris or her shady dealings.

Back to the bin Laden Bush/Cheney/Harman tactic of fear:

Terrorism may be intrinsic to Harman's world but not so for her constituents. Jobs, health care, education, housing, the environment are some of their priorities. Harman's claim in her political ad that Winograd would "kill the defense budget, putting thousands of people out of work," is unfounded. Winograd would like to cut back a portion on defense to transition to green jobs - not to fire people, but to hire people. She has substantial support from the aerospace industry to take on that task. Here are the words of Matthew McKinnon, Legislative Director for The International Association of Machinists and Aerospace Workers AFL-CIO (IAMAW), which has endorsed both Winograd and Harman.

"Marcy Winograd has consistently demonstrated a strong understanding of the need to advocate for working families. For too long poorly-conceived trade agreements have been negotiated without consideration of the needs of the men and women who do the work here in the US and abroad. As the country we all love turns toward green energy, we have confidence Marcy Winograd will fight for American manufacturing workers to share in this critical change."

It doesn't sound to me like McKinnon believes jobs will be lost with Winograd. It sounds to me like he supports her - strongly.

But what's with Israel - the image and message in Harman's second bubble? With our nation - (that's the USA, Jane) sliding steadily into decline, why is Israel Harman's priority? She's not serving in the Knesset. She's serving in the Congress of the United States.

More specifically, how does the country of Israel relate to the 36th CD? The answer is, except for some constituents, it likely does not. But it is a huge part of who Harman is and it has defined her foreign policy. AIPAC, the Israel Lobby, influences American politics, and Harman's an AIPAC darling, as is her friend, Henry Waxman, also mentioned in her video.

Harman and Waxman need to understand that times are changing, and because of Israel's own actions and widely believed human rights abuses, Americans are learning the truth and becoming increasingly skeptical - even angry - over the hysterical Israel-bias of American legislators, who've been elected to serve America. This bias hurts America, and before long, Americans will vote against those whose loyalties are called into question, as Harman's loyalties have been because of the NSA wiretap; a serious accusation. Even if there are no legal repercussions, the stigma will remain. Perhaps not in the vehemently pro-Israel population, but certainly outside it.

Today this article appeared on Politico, describing how pro-Israel groups are raising money in support of Harman - already the richest woman in Congress. Yes, special interest groups for a foreign nation are raising money for a candidate to support that foreign nation - always and under all circumstances, which is required for Congress, according to Henry Waxman.