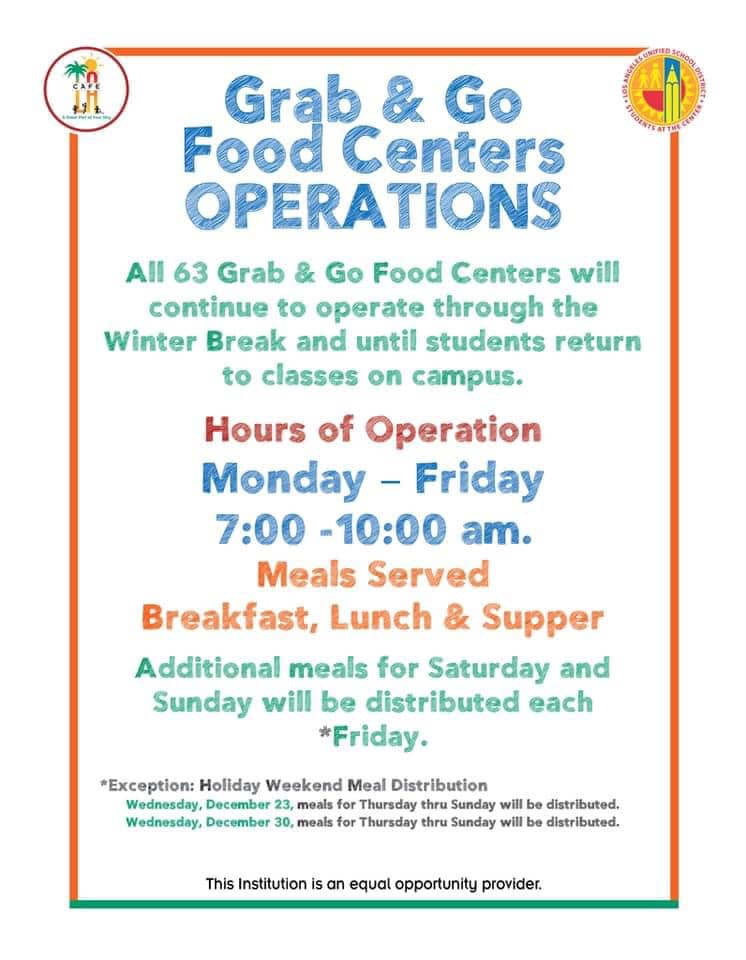 (Image by LAUSD)   Details   DMCA
& Go Food Centers will continue to operate through the Winter Break and until students return to classes on campus."
- LAUSD

One of the Los Angele Unified School District's (LAUSD) biggest accomplishments during the COVID-19 pandemic was to ensure that the issue of food insecurity was addressed during this crisis. Through the ongoing Grab and Go program, the district has served approximately 90 million meals for students and others who are in need, including adults. The LAUSD has been serving these meals since schools closed in March, even during periods when schools are normally closed for breaks. On Fridays, it supplies extra meals so that recipients do not go hungry over the weekend when the centers are closed.

Compare this program to what has been provided by Granada Hills Charter, the largest charter school in the country. This school is so large that it has more students than 86% of all school districts nationwide and receives the same funding for each student as the LAUSD. While even before the pandemic 52.7% of its students were classified as "socioeconomically disadvantaged," the school did not begin its own meal program until May 27. Instead, it directed hungry students to the LAUSD's food centers. Unlike the LAUSD Food centers, Granada specifically states that its program is "for GHC students and community youth (18 and under)".

While the LAUSD continues to serve the community during the winter break, closing only on the Christmas and New Year holidays, Granada stopped serving food at the end of the fall semester. "Food distribution will resume on January 12, 2021," leaving vulnerable families to fend for themselves. Merry Christmas!

(Image by Granada Hills Charter School)   Details   DMCA
The difference in these programs highlights the difference between public schools and charter schools. LAUSD schools serve all students regardless of need, including those with severe special education needs. Since the majority of its students are socio-economically disadvantaged, successfully providing education requires them to address social issues outside of the classroom. This is why the teachers' union, UTLA, demanded that community schools and school nurses be included in settlement talks during last year's strike. Knowing the number of their students facing food insecurity, the Grab and Go program was given the first priority for implementation when the schools were shut down in March.

As a whole, charter schools have done everything possible to avoid serving children with special education needs. Only 8.6% of Granada's students are classified as "disabled," a percentage far lower than any of its neighboring public schools. When Granada shut down, providing food to its students was an afterthought. It took them over two months to put a program in place and they are ignoring the continuing need during the current break.

There is a cost to privatizing public education and the community surrounding Granada Hills Charter school is paying it along with the public school students of Los Angeles.