(Editor's Note: This past Saturday there was an international solidarity action called "Hands Across the Sand", which is also the name of the sponsoring movement, a movement made up of people of all walks of life that crosses political affiliations. This movement is not about politics; it is about the protection of our coastal economies, oceans, marine wildlife, and fishing industries. A number of actions were held in the Hampton Roads, Virginia area, and local author, poet, playwright and journalist D.D. Delaney, attending one of them, chose to report and reflect on the event on his somewhat iconoclastic blog, The Thinking Dog, which I asked him for permission to repost here.)

In Ocean View...
Hands Across the Sand
A Thinking Dog's Journal Report

(Image by Unknown Owner)   Details   DMCA
An impressive line of 125 people joined hands across Norfolk's Community Beach on the Chesapeake Bay in Ocean View on Saturday, June 26, to demonstrate to politicians and corporate "persons" their opposition to drilling for oil and gas in the waters off Virginia's coasts.
Similar demonstrations were held throughout Hampton Roads--at Buckroe Beach in Hampton and at several different locations on the Atlantic Ocean in Virginia Beach, where, according to Sunday's Virginian Pilot, an estimated 1,000 people lined the commercial beach areas alone, between 22nd and 31st Sts.
The demonstrations were part of a coordinated nation-wide action sponsored by a score of environmental groups and endorsed by nearly three dozen other environmentally friendly organizations under the banner of Hands Across the Sand, an advocacy organization now coming of age after an initial demonstration in Florida in February, well before the BP oil-rig disaster in the Gulf of Mexico made off-shore drilling toxic. 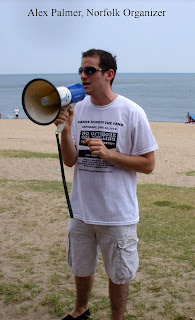 (Image by Unknown Owner)   Details   DMCA
And while there may not have been enough people to fill Ocean View's Community Beach from its south to north boundaries--probably less than a quarter of a mile--Norfolk organizer Alexander Palmer declared it "a great turnout. Even some beach-goers," he said, "turned around and decided to join."
It's true. And as an Ocean View resident myself--a near-daily visitor to the seven-mile stretch of beach which seduced me to move to Norfolk sixteen years ago, I, too, felt energized to see so many residents, not just from Ocean View and Willoughby but from Larchmont, Ward's Corner, Riverview, Little Creek, Colonial Place, and Ghent--all showing up in 95-degree heat to say that we not only don't want oil or gas drilling in our offshore waters but we want our leaders to promote alternative, renewable energy technologies to replace fossil fuels.
Above all, we do not want an accident here like the one which has devastated the Gulf.
As demonstrators stood with joined hands on the beach between the shelter of a picnic pavilion behind us and, before us, the magnificent expanse of the Chesapeake Bay reaching over the horizon, a pod of dolphin lazily cruised by--beyond the sand bar which marks the drop-off into the Bay's deeper waters. They were the first dolphins I'd seen in the Bay this season and, as it seemed to me, lent the demonstration their nod of approval, a fortunate omen. 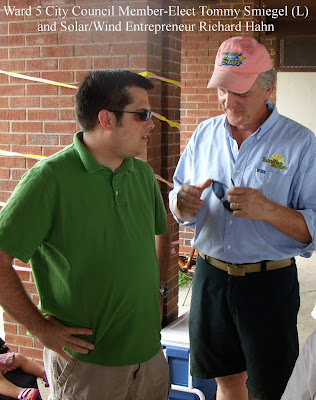 (Image by Unknown Owner)   Details   DMCA
Tommy Smiegel was there, as were many of his campaign workers, fresh from their victory last month in a successful election challenge to long-time Ward 5 City Council representative Randy Wright (who was not there). Smiegel is a fresh face in Norfolk politics, representing a younger generation coming into power which is friendly, he says, to environmental issues.
Also there was Sharon McDonald, Norfolk's Commissioner of the Revenue, who told me that energy and environmental concerns have a growing constituency of support within City Hall and among some of the area's business leaders. She led me to believe that positive developments in energy efficiency and investment in renewable technologies are very likely in the offing.
Smiegel mentioned similar options which City Council could pursue, such as commissioning solar and wind generation systems for public schools.
But there was little real specificity in any of the random conversations I had, either with these public officials or the many private citizens I chatted with. Maybe it wasn't the place for much intellectual effort--on the beach in the withering Sun.
Still, I came away with the impression that, while probably everyone who went there is horrified at the situation in the Gulf and convinced that we need to wean ourselves from oil (and presumably gas and coal) and develop wind and solar alternatives (nukes weren't broached by anyone I talked to), no one has a very good idea about how to accomplish this very major transition.
What if, for instance, instead of oil rigs lining the horizon of the Chesapeake Bay, we were to look out on windmills instead? Not everyone likes that idea!
Nor was it clear what the next step for the Hands-Across-the-Sand movement should be. Nearly everyone, it seemed, signed the petition in circulation calling on elected officials to ban offshore drilling and endorse clean energy, though a Louisiana judge (with financial ties to energy corporations!) has thrown out President Obama's six-month moratorium. So it's not even certain that the BP disaster is going to stop a single new deep-water oil-drilling license, let alone the hundreds of on-going deep-water wells pumping today--further conceivable accidents waiting to happen. And drilling projects outside of deep water apparently continue to get routinely rubber-stamped by the federal government.
It seems to me, then, that the major hurdle, which was barely approached in the June 26 demonstrations, is how to persuade ourselves and our policy-makers to commit to facing the sober reality of what it means to get off fossil fuels. This is a conversation which has barely begun, probably because its implications are so enormous that no one--certainly no politician--wants to stir the viper's nest of public opinion likely to flare up in attack against any who address it.
Beyond that major, daunting hurdle are numerous other serious policy issues involving what kinds of alternatives to turn to. As Norfolk organizer Palmer notes, "we should have listened to Jimmy Carter," who tried to make energy conservation a national priority in the late 1970s. Even then it was late to begin the conversation, which in reality should have begun in the 1950s. In 2010 you have to wonder if it's too late altogether.
But Palmer--who, incidentally, works as a victim-witness advocate for the City of Norfolk--has an activist's enthusiasm for possibilities. Perhaps, he speculates, the energy powering our future hasn't been discovered yet. "Solar? Wind? Who knows?" he says. "Let's look," by funding research in many directions with the billions in subsidies we're now giving to the oil companies.
For local MoveOn.org coordinator Joe Cook, who provided the demonstration with a useful bull horn, the next step is "to put pressure on elected officials at every level," from federal to local, "to wrest control of our democracy from the corporations." That means a moratorium on off-shore drilling, massive investments in wind and solar, and ending subsides for oil, nukes, and coal. Local city councils, meanwhile, can get into the act by passing resolutions advocating protection of our local shores from the incursion of polluting energy industries.
Cook also stressed the necessity for a Constitutional amendment "to roll back Citizens' United," the Supreme Court decision permitting corporations to channel unlimited funds into elections; for "the public financing of elections so we can elect people accountable to the people and not to the corporations;" and for a five-year waiting period before lobbyists and public officials can switch jobs.
These are, of course, the public views of MoveOn.org, based on a recent online survey of its members, though there's no reason to believe Cook's personal views are any different.
In any case, as the demonstration broke up around 12:30 p.m., the answer to my leading question remained uncertain.
What next?
Wavy News (local NBC Channel 10) covered the demonstration in Ocean View with no more than 30 seconds of air time on the 6 p.m. broadcast, which included a sentence about the 1,000 who lined the main ocean-front site. The American loss to Ghana in a World Cup soccer match earned two spots, in headline news and again, with more detail, in sports.
Maybe if the Hands-Across-the-Sand people had turned out with coolers of beer, loud rock'n'roll music, and rowdy cheers for USA Solar and Wind followed by a mass plunge naked into the Bay, they might have made a greater impression.
Meanwhile, oil continues to gush out of a sheared pipe a mile below the surface of the Gulf of Mexico, and no one knows what to do about it.
Let's just pray that by next June 26 we don't find many more of us than a few hundred activists out on our beaches again, not demonstrating but shoveling up BP's tar balls for minimum wage.
*********

"Some may think I named the dog after myself.

But that would be wrong.

The fact is, I named myself after the dog."

Welcome to The Thinking Dog. My name is D.D. Delaney, and I am the creator and main contributor to this site, with the exception of Jala Magik's page. Jala, an artist and writer, is my life-long partner and displays some of her art work and writings from her unpublished Book of Magik on her page.

On the other pages you will find information on my published articles and books of plays and poems as well as samples of my various writings. Since I am also a performer, I have devoted a "Performances" page to describe material I have in my repertoire, available for booking at your club, school, organization, or facility.

In the "Articles and Reviews" section you will find references to past published work as well as occasional new material that I want to share.

"Thinking Dog's Journal" is meant for reflections on current events, both locally in the Hampton Roads, VA, area, where I live, and nationally, as information comes my way that seems relevant to a general public.

There is also a page introducing myself in a brief biography, and a page with contact information, should you want to communicate with me directly. I also have two blogs, The Thinking Dog's Journal, where I occasionally post articles and commentary, at http://thinkingdog.blogspot.com, and Thinking Dog Reviews, at http://thinkingdogreviews.blogspot.com, where I post critical reviews of theater productions and other occasional arts and culture events in Hampton Roads.

I hope you find our online materials both enlightening and entertaining. Thanks for stopping by.

I am a student of history, religion, exoteric and esoteric, the Humanities in general and a tempered advocate for the ultimate manifestation of peace, justice and the unity of humankind through self-realization and mutual respect, although I am not (more...)
Related Topic(s): Addiction To Oil; Energy; Energy Exploration - Offshore Drilling; Energy-renewable; Gulf Of Mexico; Oil Spill Cleanup; Oil_spills_and_environmental_disasters; Renewable Energy, Add Tags
Add to My Group(s)
Go To Commenting
The views expressed herein are the sole responsibility of the author and do not necessarily reflect those of this website or its editors.