Haiti's calamity is a windfall for everyone, except Haitians living in Haiti in the camps.

However, it looks like the sweatshop owners and business class in Haiti don't stand to make anything from the provisions in the deceptive HOPE act for the DR either.

(Image by Unknown Owner)   Details   DMCA
Most Haitians are well aware of the deceptions that are often used to keep aid and funding from getting to the people; this realization has already sparked massive demonstrations against the government of Rene Preval for not only their lack of presence and incompetence during and after the quake, but for the state of emergency that the Parliament declared which gave a commission made up of foreigners and Haitians the power to disburse donor funds.

There are signs that the "International community" is preparing to crush any dissent. They have mobilized several means for militarizing Haiti and the Caribbean by:

1) Withholding funds from the Haitian govt. This is being justified by the Democrat Patrick Leahy as a response to the alleged massacres at Les Cayes prison by Haitian Riot Police. This is in spite of the fact that both the UN and the Haitian gov't are said to have launched investigations.

By the way, the call for investigations is echoed for Jamaican police by the U.S. State Department's tool Human Rights Watch along with other members of the international community.

In 2008 HRW issued a flawed report entitled, "A Decade Under Hugo Chavez" ahead of a constitutional referendum in Venezuela. Read this report which questions HRWs real motives (PDF).

2) There is a ramp up and launch of an "international police" force:
Security Council authorizes extra police for UN force in Haiti

"The deployment of 680 further officers as a result of todays Council resolution will bring the total number of UN Police (UNPOL) serving with the UN mission, which is known as MINUSTAH, to 4,391."

3) Also, Hillary Clinton and a U.S ambassador have announced the launch of a Caribbean security force to protect "our people."

"For all of us, the safety of our people must be our highest priority. That's why today we are committing ourselves to CBSI," the chief US diplomat told the gathering at a beachfront hotel."

The Caribbean is getting harder to handle for the Western Colonial powers. It is unfortunate that peaceful protests, political organizing and calls for human rights and living wages to combat the skyrocketing cost of living in the Caribbean are often met with deadly violence from those who are in power.

It is instructive to know that U.S. foreign policy has spurred some of these developments in the Caribbean. In Jamaica for one, the CIA created the Jamaican Shower Posse which battled with Jamaican police to protect politically connected alleged drug lord, Dudus Coke. In Haiti, of course there were two successive coups, one in 1991 and the other in 2004 which was planned by the U.S., France and Canada, and primarily supported and financed by the U.S.

A change in U.S. foreign policy is necessary to stop the steady progression towards chaos in the Caribbean. The Caribbean is just a tiny microcosm for the same dangerous situations around the world. Just last week a report on Columbian, rated it the most dangerous place in the world for trade union members. Therefore, it was incredible to hear U.S. Secretary of State Hilary Clinton make the following statement about Columbia:

"In her speech Clinton said lessons learned in Colombia, which she visited on Wednesday, as well as in Mexico and Central America are being applied to the Caribbean region."

Is there a disconnect here? No, because everything is going according to plan. This is clear from the op-ed piece, "Rebuilding Haiti," which was posted on March 10 this year at the Huffington Post by one Eric Farnsworth, a former State Department official. Farnsworth, is now the VP of an organization called the "Council of the Americas":

There's really only one way to establish such a framework for action [rebuilding Haiti] : via U.N. mandate. Existing U.N. authorities should be expanded, and Haiti be given special status under international law, a virtual enterprise zone of international governance. Reconstruction requires a unified command with a common vision and mandate, as well as authorities for donor nations to conduct humanitarian and reconstruction efforts without fear of being labeled interventionist or imperialistic, as some have already experienced.

Under such mandate, historically relevant democracies including the United States, France, Canada, Brazil, the Dominican Republic, and others will be able to come together with key sectors of Haitian society to build a long-term redevelopment plan for Haiti. Political and economic institutions, physical infrastructure, investment and regulatory matters, the environment and clean energy use, social development, and public health, among other issues, would all be considered."

In other words, the "International Community," which controls virtually all the money and aid projects to Haiti, and has done such bang up job of keeping Haiti underdeveloped and poverty stricken, should continue wielding the real power in Haiti. The State Department was in agreement with Mr. Farnsworth in 2004, when they supported a coup against the democratically elected government. See how that works? 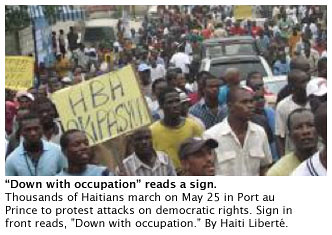 The Haitian people would rather go with the course prescribed by Loune Viaud of Zanmi Lasante and with Monika Kalra Varma, director of the Robert F. Kennedy Center for Human Rights, who co-authored an Op-Ed in today's Boston Globe. (06.13.10).

The piece describes the need for Haitians to be involved in the decision making process of rebuilding of their country.

"Since January's devastating earthquake in Haiti, well-meaning experts have proposed an abundance of short-term and long-term recovery solutions. They ask why aid delivery has been so slow, why previous development plans for Haiti have rarely been successful, and why billions of dollars in funding over decades have not improved conditions for the most impoverished people in our hemisphere.

Some blame the government of Haiti, while others, including the organizations we represent, often point fingers at the international community. The simple answer is that those who have the greatest stake in rebuilding Haiti, Haitians themselves, don't now and never have had a real seat at the table.

While Haitian resilience has been duly recognized around the world, few appear to be interested in talking to Haitians about how to rebuild their communities and how the billions likely to be pledged to their country will be used. And no one is talking about what recourse Haitians will have if promised projects are never completed, or worse, pledged money never arrives. Unfortunately, past failures can be found in every community across Haiti - water projects that were promised but never built, resulting in water-borne illness and death; food aid that was delivered, but spoiled or sold in markets below the prices asked by local farmers; non-government organizations that started educational programs, but then shifted priorities, leaving children without access to schools.

Chantal Laurent is a Haitian-American who blogs about Haiti, socio-economic, environmental and political issues at thehaitianblogger
Related Topic(s): Haiti; Haitian Earthquake Crisis; International; Police; Present_Day_Haiti; US-Haiti Policy, Add Tags
Add to My Group(s)
Go To Commenting
The views expressed herein are the sole responsibility of the author and do not necessarily reflect those of this website or its editors.