" The U.N. does not contain or resolve conflicts but is a globalized world policeman serving the imperial order." --- Fernando Moyano 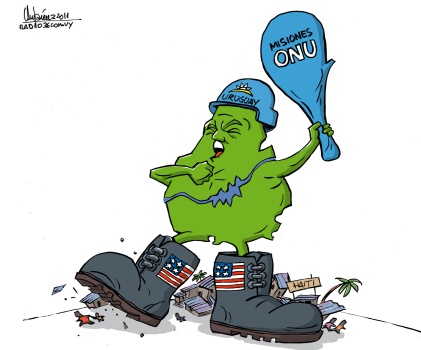 The Foreign-Hand Syndrome: a Country that is Not Your Government

Translated from the Spanish by Dady Chery

(See below Haitian Protesters Demand Ouster of UN Troops and Dady Chery's Did Harvard scientists cover-up UN source of Haiti cholera? and UN, Uruguay and the Literal and Systemic Rape of Haiti by Ezili Danto)

Everyone knew it. The [Uruguayan] minister of "defense" who is supposedly versed in military matters, always says that he knows very well how a barrack runs. Simultaneously he argues that the facts surrounding the
recent denigration of Haiti involved only four "bad apples" and not the
military institution.

If true, one would have to think that the Navy commander of a unit is
picked for being the most reverend a**hole who can sit on a couch and let
a striped alligator pass right under his nose. As you know, things like
this are difficult not to know.

A month ago a report by a Haitian NGO in Port-Salut denounced the rapes of minors perpetrated by Uruguayan marines from MINUSTAH. Within a matter hours, the Navy carried out an "internal investigation" that concluded
these allegations were all false and all the military innocent. The
ministry, government, all across the political spectrum, the
communications media, made use of that version.

Then a specific complaint came to light, with a victim referred to by
name: an 18-year-old kid. And a video appeared. Now the Navy version says that this is a joke in very poor taste.

The events occurred two months ago and took a month to hatch because of
the shame and pain of the victim, but the video taken at the naval base
shows with what bravado these rapists did their feat.

The military command denies everything about the investigation. But
totally outside, a Haitian manages to get a copy of the video and
broadcast it; someone goes to the Internet; a Haitian judge takes up the
matter and notifies the United Nations, which refers the matter to the
Uruguayan Ministry of Foreign Affairs. And that's when the minister of
"defense" takes cognizance.

But before this, a human rights organization in Haiti collected facts
demonstrating that an exchange of sex for food called "cambiar" is a
practice that was installed in the Uruguayan naval base in Haiti from the
beginning, together with traffic in illegal substances. It is impossible
for these things to exist without knowledge of the command. Those entering
any military unit must pass through checkpoints. There is a guard's
office and an officer in charge, and so on. And no soldier turns a blind
eye without getting something for it. Anyone who really knows headquarters
knows how this works.

Related Topic(s): Ezili Dantò; HLLN; Haiti; Imperialism; Minustah; Rape; Soldiers; Uruguay, Add Tags
Add to My Group(s)
Go To Commenting
The views expressed herein are the sole responsibility of the author and do not necessarily reflect those of this website or its editors.