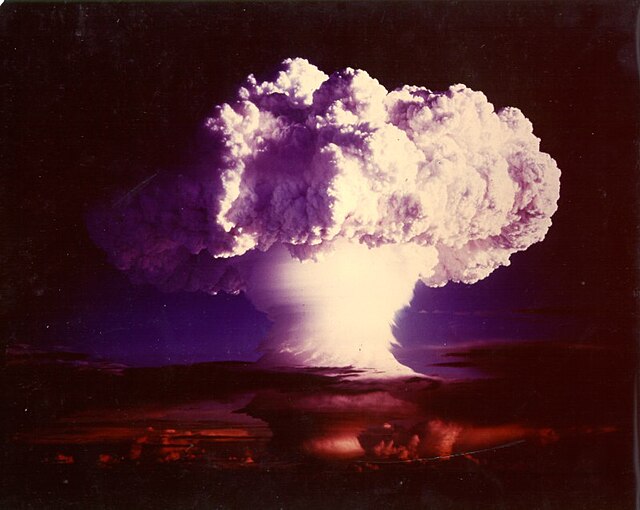 We are very fortunate that, since the Hiroshima-Nagasaki horrors more than 71 years ago, thermonuclear warheads have have been detonated only for test purposes. This despite the fact that the 9 nations possessing thermonuclear warheads now have a total of roughly 15,000 of them. Over 90% of the world's thermonuclear warheads are in the arsenals of the US and Russia (about equal numbers in each). The largest of these are over a thousand times as powerful as the devastating bombs used against Japan. (At one point, when the arms race was was going full blast, the US had over 31,000 thermonuclear warheads [1]!)

In April of 2016, the Obama administration announced plans to initiate the spending of a trillion dollars over the next 30 years to modernize our thermonuclear-weapons stockpile [2]. Recently North Korea appears to have tested missiles that might be capable of carrying thermonuclear warheads to the US mainland.

On the other hand, 122 nations (out of 193 UN members) voted to approve a UN treaty outlawing nuclear weapons [3]. Sadly, except for the Netherlands, the one nation that voted against the treaty, all NATO member nations, and all of the 9 nations with nuclear weapons boycotted the negotiations, and abstained on the vote.

Using such suicidal weapons would be idiotic. Nobody would emerge victorious from a war in which they were used. In addition to the direct physical destruction caused by explosions and firestorms, there would be radioactivity dispersed via the atmosphere that would affect the entire world. A brief discussion of two serious problems will set the stage for a discussion of how this threat to humanity might be phased out.

The nation that most recently joined the exclusive club possessing nuclear weapons is North Korea. During the Korean War, about a million North Korean civilians and about 300,000 soldiers were killed, at a time when the North Korean population was less than ten million. If we assume that the number injured, but not killed, is 3 times the number killed, then over 5 million North Koreans, over a half of the population, were killed or injured--truly a staggering toll. Most of the killing was done from the air. About 36,000 Americans were killed in the senseless Korean war. [4]

No peace treaty was ever negotiated, so the Korea War is not officially over. About 29,000 American troops are currently stationed on the border between North and South Korea (latest figure, which is for 2014). The North Korean nuclear weapons are clearly intended to deter attacks on them, as it is obvious that, should they initiate use of such a weapon, the retaliation would wipe them out completely.

It makes no sense to threaten them with nuclear weapons. A reasonable course of action would be to negotiate an end to the war, to engage North Korea in normal trade relations, to encourage negotiations between the North and South, and perhaps eventual re-unification of Korea--something the current leadership of South Korea seems amenable to [5]. (The current populations of North and South Korea are, respectively, about 25 and 50 million.)

Crimea and Ukraine have both been part of Russia since the 1790s. A majority of the Crimean population describe themselves as Russians, as do a significant minority of the Ukrainian population. Over the past several years there has been turmoil in Ukraine; a breakaway government has been formed there. The Crimean people voted to remain part of Russia. Regardless of how one might judge the rights and wrongs of the various factions, labelling as aggression Russia's efforts to retain these regions in their federation, as is routinely done in much of the media, seems inappropriate. An early instance of such labelling is a statement in 2008 by then Vice-President Dick Cheney [6].

(Personal footnote: My mother was brought to the US as a baby by her twenty-something parents in 1905. My grandparents, very happy to be here, despite being impoverished for many years after their arrival, rarely talked about their homeland, which they referred to as Russia. More precisely, they came from Uman, a city in Ukraine. I don't recall ever hearing them use the word "Ukraine".)

It is interesting that, while the US media are beating the war drums, the Russian government just cut their military budget (which is about a tenth of our military budget) [7]. Back now to the less emotional problem of H-bombs.

What can be done to phase out nuclear weapons?

Getting rid of the many thousands of nuclear weapons held by 9 nations will not be easy. Disposal will have to be done gradually, in a series of carefully monitored steps. A beginning was made, not long after the break-up of the Soviet Union.

In 1993, when the US and Russia had about 7,000 and 7,300 nuclear warheads respectively, they actually took an important first step toward disposing of them. A complex agreement was reached between the US and Russia for the Russians to convert 500 tonnes (a tonne is a thousand kilograms) of highly enriched uranium (HEU), usable for making H-bombs, to low-enriched uranium (LEU), which was then sold to US power companies for about $17 billion (considered to be a relatively low price). This was done over a period of 20 years. This material constituted a substantial portion of the fuel used in the 104 American nuclear reactors during this period. American HEU, apparently a smaller amount, was also reduced to LEU to be used for various purposes, including fuel for nuclear submarines. A similar deal was enacted to convert Russian and American weapons-grade plutonium (smaller amounts) to commercial-grade material.

This is encouraging, but barely made a dent in the huge inventories of nuclear weapons possessed by Russia and the US. Unfortunately, as a result of the Ukraine controversy, such cooperation has been suspended.

Apart from the terrible possibility of deliberate nuclear-weapon attacks by one of the 9 nations with these weapons, there is the possibility that one, or perhaps even several, nuclear warheads might be stolen by a terrorist group and then detonated in some city. The likelihood of such an event is far greater when there are many thousands of warheads. So, even before we have made their deliberate use very unlikely, it would be useful to reduce the nuclear arsenal sizes by a sufficient amount to make it much easier to safeguard the remainder against theft.

Related Topic(s): Explosion; Korea; Military; Peace; Plutonium; Threat; Treaty; Ukraine; Weapons, Add Tags
Add to My Group(s)
Go To Commenting
The views expressed herein are the sole responsibility of the author and do not necessarily reflect those of this website or its editors.