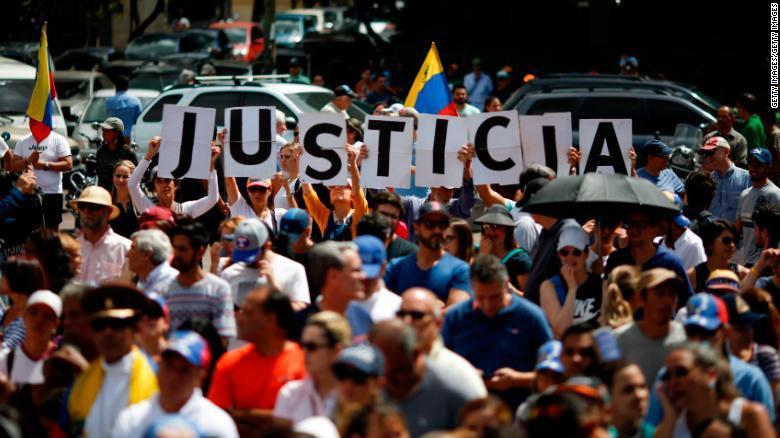 (Image by Rainer Shea blog)   Details   DMCA
Guaido Was a Bust, But U.S. Attacks on Venezuela Will Continue

Over the span of only a few months, beginning roughly in January, the illegal U.S.-backed coup that the U.S. has attempted to activate through Juan Guaido and other elements of Venezuela's majority white and well-to-do right-wing opposition has gone from "serious threat" to "complete debacle". Guaido has failed to gain the defectors from Venezuela's military that he'd need to come to power, and has shown himself to be a leader who lacks charisma and the ability to mobilize a large mass of Venezuelans. As a result, Guaido's U.S. handlers have abandoned him (intimated by the fact that the previous pro-Guaido campaign from the American political and media class has vanished since his artificial uprising fizzled).

The most striking factor in the collapse of the U.S./NATO empire's latest Venezuela coup attempt is the vast opposition to capitalist sabotage that's been displayed by the Venezuelan people. The continued survival of the anti-capitalist revolution that Chavez started can be attributed to several factors, including Venezuela's heavily equipped military and Russia and China's success, in an increasingly multipolar world, at protecting Venezuela. But the greatest source of Venezuelan socialism's resilience is the abiding commitment the country's people have to preserving and expanding the gains that Chavismo has created for them.

Venezuela is in its current situation of susceptibility to capitalist sabotage because the socialists haven't yet managed to take the capitalist class within the country out of power. While the Bolivarian movement is driven largely by Marxist principles, the government hasn't been able, for instance, to put ownership over the means of production into the hands of the poor and working people. Policy-wise, it's only managed to implement expanded social programs and the nationalization of a limited amount of industries, leaving Venezuela to still be largely under the control of a class of corporate oligarchs.

But, given the relentless economic sabotage and violent destabilization that's been directed against them by capitalists both within Venezuela and abroad, it's difficult to lay all of the blame for this on Chavez (now deceased) and Maduro. And despite the great political setbacks the Bolivarian revolution has experienced, the election of Chavez in 1998 did bring a cultural transformation to Venezuela that's given the country's socialist movement strength for the battles ahead.

Before Chavez, Venezuela was entrenched in a dystopian neoliberal period. Hyper-capitalism had made poverty and inequality rampant, and Venezuela was also arguably the most Americanized country in South America. Venezuela's government was totally unwilling to resist the control of the U.S. empire, and even American sports were generally emphasized over Latin American sports as part of the country's colonized popular culture. Then Chavez, who'd extensively studied his country's history in college and eventually came to teach history at the Venezuelan military college, came on to the political scene with a mission both to defeat class inequality and restore Venezuela's desecrated heritage.

Because of the popularization of Chavismo, and because of the egregious economic harm that America has brought upon Venezuela in the preceding twenty years, the Venezuelan people have soured on American culture and have oriented themselves around confronting their historical traumas at the hands of colonialism. This sense of commitment to bringing about restorative justice is tied in with the commitment to advancing Chavez' revolution against capitalism, a revolution whose success is essential for ending the class inequality within Venezuela that puts the country's white population in the position of economic dominance.

The colonizers are rationalizing their war against Venezuela by erasing the Venezuelan peoples' history, and by vilifying those who want to liberate the country from capitalist exploitation and colonialism. When Western commentators don't mention the full extent of the U.S. intervention that Latin American countries have experienced, or when regime-change propagandists blame socialism for the crisis (while implying that capitalism wasn't what motivated the people to elect Chavez), they're telling lies that have root in the age-old "white man's burden" complex. They deny the reality of the Venezuelan people's continued oppression by capitalism and imperialism, and claim that Venezuela's problems come from a mythical disease that originated from within the country, its people, and its culture. The cure they sell for this supposed disease is American intervention and the implementation of hyper-capitalist reforms, as was revealed when Guaido's team of neoliberal economic advisors rolled out their would-be project for mass privatization.

As the continued electoral victories for the Chavistas show, the mentality of most of Venezuela's politically engaged citizens goes completely against this capitalist and colonialist mentality. There's a popular will for Venezuela to control its own destiny. And if the country can overcome all of the future regime-change attempts, it can arrive at a brighter future.

On the part of the Venezuelan people, bringing the revolution to completion will require continued efforts to resist the anti-Chavismo propaganda from capitalist saboteurs, so that Maduro and his ideological heirs can continue to win votes. On the part of the Venezuelan government, it will require a commitment to militarily resist all future attempts at invasion and to further expand industry nationalization and the social safety net. And on the part of us, the American people, it will require the courage to stand up to our own government and its attacks on countries like Venezuela.

When the U.S. next tries to invade Venezuela, or to covertly assassinate the country's leader, or to force through a corporatist like Guaido with an unconstitutional coup, we must defend our fellow victims of capitalism by stopping our government's regime-change plans. In addition to helping the war chest of Hands Off Venezuela by donating to the organization, the most important action we can take to protect Venezuelans is to wrest the national narrative on Venezuela out of the control of the corporate media.

If we support alternative-media figures like Abby Martin, Caitlin Johnstone, and John Pilger in their fight to bring the truth about Venezuela to the American people, the influence of the anti-Chavista propagandists will be diminished between now and the next time there's a media campaign to manufacture consent for Venezuela regime change. As the socialist movement fights to make gains in America, it's the responsibility of Americans who oppose imperialism and capitalism to help their allies in Venezuela.