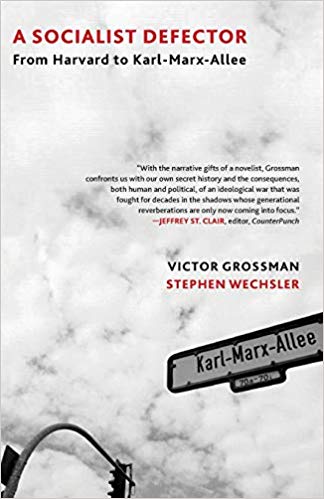 I finished Victor Grossman/ Stephen Wechsler's* A Socialist Defector: From Harvard to Karl-Marx-Allee (2019) with a sigh of regret. His memoirs of living in East Germany from his defection from the US army in 1951 to his witnessing the post-collapse 'freedom' was as close to building socialism as I'll ever get. What a great life he led, quiet, without the rat race, surrounded by socialists living socialistically. Sure, after 1917, those of us born and bred in the West who wanted to help 'build socialism' could join the appropriate communist party, hurriedly set up by eager enthusiasts in the 1920s. But, as Grossman describes his own experience in the CPUSA in the late 1940s, this was like having your teeth pulled in some modern day Inferno. For an all too brief 40 years, Germans had the rare chance to free themselves from their capitalist puppet-masters. Some, the best, braved the shrill cries of red, traitor, fool and choose socialism. Thousands of non-Germans did too, escaping death, prison, torture, like Grossman and Chilean socialist Michelle Bachelet, who returned to become president of Chile in 2006. Despite the nightmare conditions of isolation, sabotage, the heavy cultural hand of FRG media pouring lies and distortions, sugar-coated with Camels and nylons. We don't make our history as we please , but under circumstances existing already, given and transmitted from the past.

It is a real living miracle, those 40 years. The constant pressures, including a sudden West-mark in 1948 that emptied East German shelves until they figured out how to stem the hemorrhaging of already scanty goods, there being no Uncles Sam and Marshall stocking them from the bottomless wealth the US accumulated in WWII.

That wasn't the worst of the hemorrhaging. One in five took the metro crossing into west Berlin at Friedrichstrasse or, in the early years, just walked across the border and blended into the Wessies. And don't forget the poisonous CIA/BND types that could go the other way about their 'business' unimpeded until 1961.

The overall population fell from 18.4m (1950) to 16.1m (1990), most leaving being ex-nazis, liberal intellectuals, doctors, engineers. Wages were double or more, in 'hard' currency. What possible choice could there be? Ossies were despised, before and after the Wende (the overthrow).

Grossman faced a 10yr prison sentence for 'lying' about 'never having been a member' in 1951 when he was drafted. But admitting his past to the FBI was an even worse fate, making him a hated, virtually stateless person with no rights except the right to starve and die. The FBI and McCarron Act (1950, vetoed twice by Truman, bless his heart) would no doubt consign him to Dante's sixth+ circles, with heresy, violence, fraud, and treachery, though Grossman would surely have no trouble convincing God that it is THEY that belong there.

Whatever. Grossman swam the Danube one night and after wandering for hours, finally found an Austrian guard and asked to see the Soviet commandant. He joked with the Russian guard about Pushkin and Dostoevsky, the only Russian words he knew. He was accepted and sent to Bautzen, a hill-top town in eastern Saxony on the river Spree, complete with castle and magnificent Lutheran-Catholic cathedral (in a celestial joke, a small fence separates the two halves). Near Dresden and Leipzig.

He was fixed up with a job and nice room in a boarding house. The post-war devastation and the new social order meant a lot of shared effort and sacrifice. Grossman seemed to have more or less pleasant hosts (landlords?), who no doubt were sharing their homes at government request. He recalls rationing and the importance of a good lunch at work, the sight of cars with wooden ovens mounted on back as motors in the early years. When razors disappeared he had to line up to resharpen his razors.

Bautzen was a centre for expats of all kinds: there were 15 Americans, 10 Brits, 5 French, 5 from north African French colonies who deserted to avoid fighting in Indochina, a Dutchman, Spaniard, Irishman, Mexican, and Nigerian. All men, some having fled conflict zones, some with drinking problems, some blacks with white German or American women, both prohibited in FRG-US.

Grossman didn't seem to chum with any. If they found a local woman, they integrated. Singles travelled to bars, caroused, were late for work. We don't learn what happened to them. He recalls one gigantic black American, a former boxing star, clean-living and able to travel on tours and at will. The kids in the neighbourhood loved him and followed him like a pied piper. Grossman found his true love Renate, and soon was just another Ossie.

Everywhere, what was immediately striking, by the 1960s, was the relaxed work atmosphere. Good workers were in demand, and management hustled to find 'deficit' goods for the factory grocery. People always had a battered briefcase, mostly not for business documents, but in case something exciting was for sale that day. Grossman complains of there being too many extras with extra staff that probably could have been culled.

He was impressed by the celebration for the 10th anniversary of the victory at Stalingrad in 1953, the genuine respect shown to the Soviet victors. The train locomotive painted 'Free the Rosenbergs'. [Think today of a country where 'free Assange' is painted on a tram or train. Or better, a world where this is unnecessary.]

Most people he knew were warm-hearted, rejected the nazi past, were dedicated to creating a fair socialist society. There were dogmatists, hacks spouting cliches, careerists, slow thinkers/ idiots, a few bitter anti-GDRers displaced from now Polish Silesia. Meanwhile, the nazi past in FRG was alive and well. Adenauer dreamed of retaking provinces given to Poland (in the fine print of 1950s passports).

As I read this, an epiphany. There's a goldmine for social psychologists/ anthropologists here the FRG being the 'control group' : how do people develop without capitalism distorting their character? How to build socialism? Where is the movement to document the socialist experience in a neutral/ positive way? Before those who lived it are dead? For example, the steel works in Magdeburg (the only real industrial enterprise in the resource-power country) had a theatre, library, sports teams/ facilities.* Imagine how this affected workers' lives, how such respect for them gave self-respect to them.

Time after time, the West schemed to undermine the GDR. No diplomatic recognition or the FRG-US would penalize any renegade country daring this. Of course, no 'Marshall Aid', so the GDR, like an orphan, had only its socialist neighbours and itself to rely on. Add in 'no reparations' from the West for any of the devastated East (surely a crime against humanity), and poor GDR forced to part with machinery to the Soviet Union, not to mention the usual wartime pillaging.

The US broke all wartime agreements it could, leaving virtually the entire nazi elite in place in its zones (the Brits and French now in the US pocket), as judges, teachers (!), police, even the army, where most nazi generals got a slap on the wrist, only a handful of the very, very worst executed. Then back to work for the Reich.

Grossman studied journalism at Karl Marx University in Leipzig and founded the Democratic German Report which he mailed to (among others) British Labour MPs. One 1962 edition included a world map with 50 swastikas for 50 FRG ambassadors. Only British papers took this seriously, but it was enough for the FRG to dismiss the very, very worst of them, claiming the GDR also had ex-nazis. Not true, Grossman was able to shoot back.

Related Topic(s): Capitalism; Democratic; History; Socialist Organizer, Add Tags
Add to My Group(s)
Go To Commenting
The views expressed herein are the sole responsibility of the author and do not necessarily reflect those of this website or its editors.