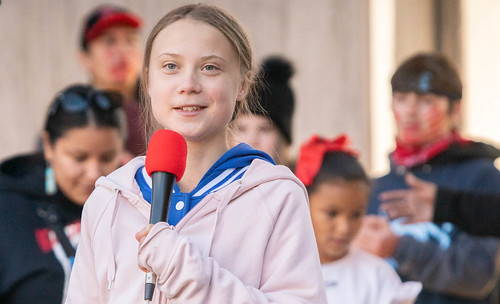 Out of the mouths of babes, there is perfected wisdom. This biblical proverb is both an admonition and a truism, and is borne out with the selection of Greta Thunberg, as the TIME person of the year, at the tender age of sixteen. She is festooned with this most coveted title and commands the global stage, not as a genius or worker of miracles, but as a sixteen year old nondescript, adolescent girl, barely out of her early teens. Greta is unlike most of her age peers. She must have spent several sleepless nights and experienced serious misgivings, pondering her calling and passion as a climate activist, which has totally consumed every fiber of her being.

At that age many teenage girls are totally besotted with their appearance or are in avid pursuit of peer acceptance or measure their self-worth by the amount of attention flowing to them from male counterparts. These phenomena, which may be considered as rites of passage, if not successfully traversed, can unfortunately lead to dire consequences, which mar the individual and sometimes have lasting effects well into adulthood. The need for external affirmation can be torturous. At Greta's age, altruism does not come to the fore and is certainly not a way of life. It rarely co-mingles with the vagaries and hardships of self-discovery.

Today's celebrity culture, based on self-promotion and self-adulation and compounded with the ubiquitous social media fervour, has taken over our youth worldwide. It is especially unforgiving for the girl-child, who is constantly bombarded with images from Park Avenue, the world's advertising mecca, emitting subtle and not so subtle messages on standards of beauty, to which every girl should aspire. The not so subtle message, being that a girl need look no further to identify her self-worth and value to society, than the superficiality of physical looks. She is led to believe that this is inextricably linked to her raison d'etre.

No, Greta is not overtaken with spending her free time perfecting the latest dance party steps or experimenting with the latest shades of blush or lip gloss or cocooned with her 'bff's', as they make their regular pilgrimage to the local shopping mall. Not that there is anything inherently wrong with those pastimes; that is not just who she is. For that matter, she is not even devoting her life-force towards excelling in academics, as commendable as that maybe, because as far as she is concerned what good would a fine, illustrious career be if the planet is close to extinction?

Greta is a rare breed of person, who is secure in who she is and her mission in life. She has dedicated herself in the service of humanity, by being a siren song that calls attention to a dying planet. She is doing so at such a time when she is allowed, if not expected to be insouciant, self-absorbed and highly impressionable. Greta is a dragon slayer. Not only is she in the front lines in the global struggle against the monstrosity that is climate change, she is also incurring the wrath of climate science deniers. The recent attack against her was spearheaded by U.S. President Donald Trump, a septuagenarian, who in response to her TIME person of the year award, launched into a tirade against her. He has once again demonstrated his poverty of spirit and meanness of character, as he mocks an innocent, guileless child on the world stage.

It would be recalled that Trump invited the reality TV show celebrity, Kim Kardashian to visit the White House officially amid much fanfare, as she petitioned his administration for a pardon on behalf of a female prison inmate. Kim Kardashian has parlayed her 'celebrity' reality TV show and multiple cosmetic surgeries, into a multi-million dollar fortune. We are in an age when young females need genuine role models, who can influence their lives in healthy and constructive ways, which help them to be well-rounded individuals, assets to their communities, and position them to contribute positively to society at large.

To the casual on-looker, it should have been a 'no-brainer', for the Trump administration to extend Greta an official invitation to the White House. This gesture would also have saved him from being ridiculed and lampooned on the global stage, for shamelessly bullying a child. Sadly, neither the First Lady, Melania Trump; Founder of the 'Be Best' youth initiative, nor Ivanka Trump, senior White House adviser and self-professed champion of women and family values, deemed Greta's global achievements worthy of commendation or acclaim.

Greta's accomplishments intersect with the 'me too' movement, which recognizes, promotes and protects the intrinsic value of women, and equally important, has given women a voice and a commensurate platform, independent of patriarchy in all its guises. The world is witnessing dastardly cowardice on full public display by fully grown men, who are lawmakers in the Republican Party and who are engaging in puerile antics and deception, in the Trump impeachment inquiry. Juxtaposed to Greta's leadership, courage and selflessness, the actions of these oath breakers is shocking and revolting. To those who decry her award, deeming she has not done enough to earn it, I would counsel those detractors to consider that she continues to sacrifice her childhood, innocence, personal happiness and perhaps her very life, to sound the alarm in service of the preservation of the planet. She stands as a lighthouse in a sea of political flotsam and jetsam.

In the words of George Bernard Shaw: "I can think of no other edifice constructed by 'man' as altruistic as a lighthouse. They were built only to serve".

Related Topic(s): Climate; Courage; Greta Thunberg Teenage Swedish Environmental Leade; Happiness; Impeachment; Inquiry; Kardashian; Reality; Time; Trump; (more...) Women, Add Tags  (less...)
Add to My Group(s)
Go To Commenting
The views expressed herein are the sole responsibility of the author and do not necessarily reflect those of this website or its editors.