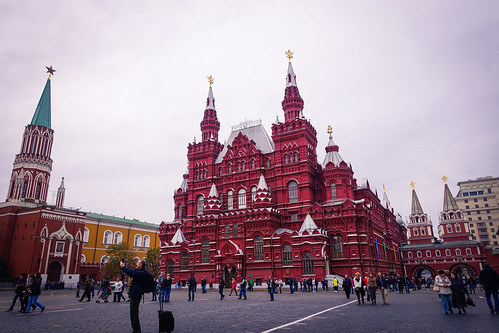 The first thing one sees to their right as they begin the descent down into Moscow's largest airport is the sun glistening off the Moscow River surrounded by lots of greenery. It gave me the pick-up I needed after an exhausting 24 hours of minimal sleep, being crammed on several airplanes and literally running from one end of an airport to another because one flight was almost 2 hours late and nearly made me miss a connecting flight.

We were blessed with sunny weather in the Russian capital, which was a welcome change from the rain and dreariness at both New York and Paris.

I had to snicker in the back seat of our cab as my travel companion this time, who had never been to Russia before, freaked at the high speeds and improvised lanes that one sees on some of the major roads in Moscow. Our taxi driver, a young military veteran who works in the veterinary profession and drives for extra money on the weekends, kept getting an earful from my friend but took it in stride.

I did not smell the pungent odor of gasoline in the air this time so the city not only looks clean but smells clean - at least, the section we've been in.

Later in the evening I heard music at various times out in the distance from our apartment, alternating between classical piano and a lady's voice singing. I couldn't pinpoint exactly where it was emanating from, but it was pleasant nonetheless.

On Sunday morning, just before 10:00 am, as I was sitting in the kitchen drinking my herbal tea, enjoying the breeze through the open window, I heard the lovely sound of church bells ringing followed by a beautiful piano sonata.

About a half hour later, I ventured out to the street where many spectators were standing along the sidewalk waiting for the procession to pass by in rehearsal for Tuesday's Victory Day Parade. Lots of families out with little ones in tow and babies being pushed in strollers.

I made my way down the street until I found a small grocery store where I could pick up some necessities. Along the way I tried out my pathetically small Russian vocabulary on a couple of the city police officers who were providing security. They politely acknowledged me but I noted their perplexed expressions as they'd just heard me speaking American English with my travel companion. Probably thinking "I thought you guys hated us. WTF?"

The apartment where we are staying is not as close to Red Square as we were led to believe. So I started out a little later on a long trek to the square to visit Lenin's Tomb, which was closed the last time I was there. 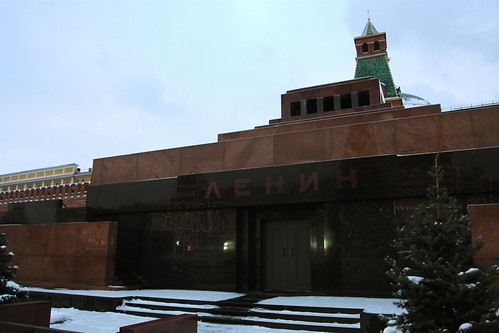 Walking along, this time solo, I was thinking about how I'm traipsing around in a country on the other side of the world where I don't know much of the language, largely without an experienced guide this time. I guess I've gotten more adventurous as I've gotten older - or maybe just stupid. Sometimes it's hard to tell.

I start to smile at people around me to indicate friendliness and then I remember that Russians don't really smile at strangers and will likely tag a smiling stranger as a foreigner or a crazy person as the old joke goes, so I keep my expressions of random good cheer to myself.

I wrote in one of my dispatches from my last visit - in Krasnodar - that there was piped in music throughout a pedestrian thoroughfare, including American and British popular music, interspersed with Russian music. Russians love music and are very fond of western music. I had the same experience today. In front of one set of shops, I heard piped in music - more specifically, it was a Muzak version of "Staying Alive" by the BeeGees

By the time I reached the front of Red Square, I realized it was barricaded off on the side I could see. It looked as though there might be some other way in but it would require me to circumambulate and risk not being able to easily find my way back to our apartment. So I decided to turn around and enjoy the walk back.

Related Topic(s): Moscow; Russia, Add Tags
Add to My Group(s)
Go To Commenting
The views expressed herein are the sole responsibility of the author and do not necessarily reflect those of this website or its editors.