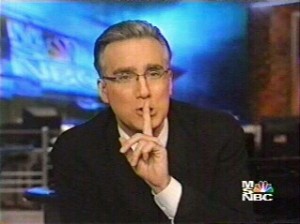 . . . A quick, overwhelmed, stunned THANK YOU for support that feels like a global hug & obviously left me tweetless. XO."

Those two sentences mark the first public message from Keith Olbermann since his sudden departure from MSNBC last Friday and they came in a Tweet.

We may never know the reason Olbermann and MSNBC "amicably separated" after his very successful stint as host of  "Countdown," but there's the usual ample speculation, which so frequently misses the mark in these situations. Most of it can be dismissed entirely, especially the claims of scores of right-wing bloggers who are crowing false victory cries over the apparent success of their personal efforts to remove Olbermann from the airwaves. (Case in point, when Mike Malloy was "amicably separated" from Air America, no blogger got it right. It wasn't Mike's stance on Israel, or a particular interview he conducted, or letter-writing campaign from various knuckle-draggers offended by his content and language, and it certainly wasn't his ratings. It was allllll about the Benjamins.)

The particulars of the Olbermann/MSNBC separation agreement are not known, but there is some kind of standard "no compete" clause which prevents Olbermann from working for another network in a similar capacity for a specific period of time. There is also language preventing either side from discussing the separation in any meaningful detail. All we can do now is wait and wonder.

So in attempting to discover the truth about Keith's firing -- and it was very likely a firing of some sort -- we can disregard 99% of current Internet speculation. This article from Saturday's New York Times does provide some factual clues about recent events that foretold Olbermann's fate, if not explaining it fully:

"On Thursday, NBC's news division staged an elaborate presentation for advertisers, seeking to sell commercial time in NBC's news programs over the next year. All the members of MSNBC's prime-time lineup spoke at the lunch with one exception: Keith Olbermann, the network's biggest star. For the last several weeks, Mr. Olbermann and the network have been in negotiations to end his successful run on MSNBC, according to executives involved in the talks who requested anonymity because the talks were confidential."

The Times article also discusses the recent takeover of NBC by Comcast, a controversial corporate power-shift which, for obvious reasons, has caused many to suspect the right-leaning (as evidenced by corporate campaign contributions) Comcast targeted the left-leaning Olbermann as the liberal kingpin at MSNBC. He would be the first to mug in the alley with more to come. But, according to industry insiders, Keith's firing was Comcast's worst nightmare:

"Months before Comcast was expected to gain control of NBC Universal, Comcast officials were worried about the perception that they might interfere with MSNBC for political reasons. One executive, who asked not to be identified because Comcast had instructed employees not to speak about the situation, said the company dreaded the prospect of being blamed if Mr. Olbermann were to quit soon after the takeover."

While many salient facts about the circumstances of Olbermann's absence will probably remain unknown, there's no question that his was the singular voice that defined the network's prime-time presence, which may in itself have been the problem. Over the years, Olbermann's tone shifted from left-leaning ironic and sarcastic to radically liberal and bombastic, and his loyal viewers loved him all the while. Indeed, the louder he decried the antics of the Neocons, the higher his ratings soared and the more professional accolades and awards he added to his shelf.

But ratings success and professional distinctions are not accurate predictors of job security (again -- see Mike Malloy), and often serve to anger the corporate forces who curse your success even as they profit from it. Contrary to the crowing of the always wrong Righties who are making baseless statements that lack of advertising support and/or low ARBITRON performance were responsible for his ousting, a growing discontent and disagreement over the program's increasingly radical tone (and good on' ya', Keith) was a more likely cause. In recent months Olbermann has issued several on-camera borderline apologies for his more outspoken rants, causing some of us to cringe and wonder who was behind his semi-retractions. The most recent occurred just after the Arizona massacre when Keith -- amazingly -- apologized for any extreme metaphors he may have used, announced the end of his "worst persons in the world" segments, and seemed to draw some kind of equivalence between his very justified anger toward Neo-con policies and the rampant, violent rhetoric screamed by right-wing media mad men.

Olbermann's replacement, Lawrence O'Donnell, is a much more moderate Democrat, a quieter, more "acceptable" voice for Comcast/NBC corporate ears. (In light of Friday's firing, you have to wonder if Keith would like to retract his retractions?)

And that is the take-away message from this terrible turn of events; that in American society today, the psychotic ravings and murderous verbal imagery of a Glenn "shoot them in the head" Beck are tolerated -- rewarded, actually -- while any personality on the other side of the political spectrum who dares speaks too vehemently or drifts too far from the corporate line are ultimately silenced. Would Fox "News" replace Beck, Hannity, or O'Reilly with their O'Donnell equivalents? Tucker Carlson for Beck, anyone?  (I'm asking you, Rupert.)  Beck has driven away advertisers and certainly draws fire for his tone and content . . .  time to call in Tucker? Sound like a plan?

If anything good can come from the Olbermann ousting, perhaps it diminishes even further the myth of the "liberal media" fantastically created in Orwellian fashion by Rush and his lessor minions over the last two decades. Beck pads his wallet while Keith packs his bags . . . 'nuff said.

In time, we will see Olbermann again. The question is whether he will be effectively constrained by this experience. Hope not. We need all the resistance we can get. One encouraging bit of news in this affair is the overwhelming response by Olbermann fans to the news of his firing. In just the last three days, almost half a million people have thus far signed a petition demanding his immediate return. That this effort is meaningless to the Corporatists who decide whose voices will be heard is not as important as this undeniable affirmation: Americans are still willing to react to yet another blatant smash-mouth move to homogenize all points of view available into a right wing sing-song that advances the ongoing political takeover of our collapsing empire.

Kathy never expected a career in radio as a talk show producer. Born and raised in Atlanta, Georgia, Kathy was completing her nursing degree when in 2001 - in an emergency - she was asked to fill in as the producer of Mike's program. Within a few (more...)
Related Topic(s): Comcast; Corporate; Keith Olbermann, Add Tags
Add to My Group(s)
Go To Commenting
The views expressed herein are the sole responsibility of the author and do not necessarily reflect those of this website or its editors.