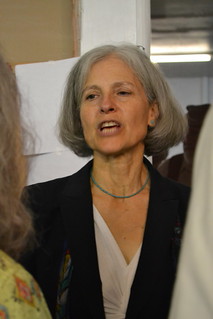 Dr. Jill Stein, the Green Party presidential candidate in 2012, announced June 22 that she will seek the party's nomination for president in 2016. Stein made the announcement on the "Democracy Now" radio program in an interview with host Amy Goodman. This was followed by a formal declaration the next day in a speech at the National Press Club in Washington.

Stein is not a socialist, and the word "socialist" was never spoken in the interview or speech and appears nowhere in her campaign literature. She is running as a capitalist candidate seeking to reform American capitalism. She uses the language traditional to American populism, both right and left, contrasting Main Street to Wall Street.

Perhaps the most remarkable feature of Stein's campaign is its parochialism. The world outside the borders of the United States might as well be invisible. In her interview, speech and campaign program, the words Syria, Iraq, Libya, Afghanistan and Ukraine do not appear. China, Russia, Europe and Africa do not rate a mention. There are a few references to immigrants, but not to any of the countries they come from, or what drives them to seek refuge in the US.

There is no assessment made of the wars and military provocations which US imperialism has conducted for the past 25 years along the periphery of the former Soviet Union, from the Baltic States to Afghanistan. Insofar as Stein even addresses the question of military spending -- she advocates a 50 percent reduction -- it is essentially as a budgetary issue, not because the wars waged by the Pentagon are reactionary and criminal in character. Significantly, she brands Israeli Prime Minister Benjamin Netanyahu a war criminal, but makes no such characterization of Barack Obama or George W. Bush, who have far more blood on their hands.

This exclusive focus on US domestic issues has a practical political benefit for the Green candidate, since she can pass in diplomatic silence over the reactionary record of fellow Green Party leaders who have entered capitalist governments around the world. From Germany to Australia, Greens have carried out capitalist policies of austerity, cutting jobs and social spending -- the exact reverse of what the Green Party candidate claims to stand for in the United States.

The Green record on foreign policy is even worse. The German Greens opened the door to the reemergence of German imperialism, spearheading the deployment of German troops to the Balkans and Afghanistan. Green politicians are supporting imperialist intervention in Iraq and Syria, the US "pivot to Asia" against China, the preparations of NATO for military conflict with Russia over Ukraine, and the impoverishment of the Greek working people under the boot of the IMF and European Union.

More fundamentally, Stein's silence on virtually all foreign policy questions is a signal to the US ruling class. The US Green Party will do nothing to challenge the global interests of American imperialism. Like its counterparts worldwide, the US Greens seek to gain access to the halls of power by reassuring those who really call the shots in American politics -- Wall Street and the military-intelligence apparatus.

There is much in Stein's domestic program that could attract popular support among American workers and youth. "Guarantee economic human rights, including access to food, water, housing, and utilities," she urges, along with "economic rights for everyone -- the right to a job, the right to complete healthcare through a Medicare for All" the right to quality education, from preschool through college, and that includes free public higher education and abolishing student debt."

But like a snazzy car that unfortunately lacks an engine, the Green candidate fails to explain how such a program of social rights can be realized economically. Apparently, according to the Greens, this program can be accomplished within the framework of capitalism, without disturbing or even greatly inconveniencing the capitalist ruling elite.

The Socialist Equality Party calls for the realization of basic social rights: to a job, a living wage, health care, education, housing, a secure retirement. But we make clear that these rights, essential for a decent life in an advanced society, are incompatible with capitalist property relations. These rights can be achieved only through the confiscation of the wealth of the financial aristocracy, the nationalization of the major corporations and banks, and the reorganization of economic life under the democratic control of working people.

For the Green Party, however, these social rights are pie-in-the-sky promises to workers that can be achieved without overthrowing the profit system, and even without any significant struggle, other than voting for Green candidates.

Stein declares, "Our Power to the People Plan lays out these solutions in a blueprint to move our economy from the greed and exploitation of corporate capitalism to a human-centered system that puts people, planet and peace over profit." But when spelled out in detail, this "blueprint" consists of nothing more radical than breaking up the largest banks and supporting the development of cooperatives and small businesses, as well as efforts to "make Wall Street, big corporations, and the rich pay their fair share of taxes."

There is no reference to wealth redistribution, a staple even of liberal Democratic Party candidates in the era of the New Deal and Great Society, but now banned from official capitalist politics, which includes the Greens. This reveals something about the class foundation of the Green Party. It is a creation of layers of the upper-middle class, living in comfortable circumstances and possessed of a certain degree of private wealth. The Greens are motivated largely by environmental and lifestyle concerns, not by the desperate struggle for economic survival that confronts the vast majority of working class families.

Much of Stein's interview with Amy Goodman was taken up with discussion of her attitude to "left" Democratic candidates such as Vermont Senator Bernie Sanders, who is challenging frontrunner Hillary Clinton for the Democratic Party presidential nomination.

Sanders, despite his occasional misuse of the label "socialist," is nothing more than a liberal Democrat with conventional views about setting modest limits on the power of the biggest banks and corporations, while supporting the worldwide military operations of American imperialism and its client states such as Israel.

Patrick Martin writes for the World Socialist Website (wsws.org), a forum for socialist ideas & analysis & published by the International Committee of the Fourth International (ICFI).
Related Topic(s): Campaign Rhetoric; Green Party; Presidential Candidates; Syriza, Add Tags
Add to My Group(s)
Go To Commenting
The views expressed herein are the sole responsibility of the author and do not necessarily reflect those of this website or its editors.