Notwithstanding the fact that ISIS pulled off three atrocities in one day in three different countries yesterday, the news to follow is the embattled Greek government's decision to hold a referendum on the conditions being proposed to them by the international financial community. Today that community pulled the rug out from under the proposal by refusing to extend the deadline for Greece to pay its debts by a few days.[tag] 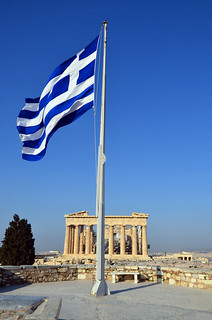 This incident is not just the latest installment in the Greek financial tragedy; it forces the rest of us to remember that in the nineties, the inhabitants of Kosovar were permitted by the international community to referendum themselves out of Serbia, while that same community now chastizes Russia for having respected a referendum by the people of Crimea to leave Ukraine.

The latest move by the international financial community puts citizens' rights back on the table, as opposed to the diktats of the higher-ups. It also exposes, as no amount of dissecting of the relative responsibilities in the Greek tragedy, the true nature of 'democratic' government, whether on the international playing field or within nation-states.

Meanwhile, the 2015 US Social Forum, being held in Philadelphia, is offering 125 workshops over four days, only two of which are about linking American activists with those of other countries, or about foreign policy, suggesting that the major players on the international field will continue to weigh more successfully on events than the mass of humanity.

Related Topic(s): Atrocities; Citizens; Community; Debt; Democratic; International; Policy; Referendum; Ukraine; Workshop, Add Tags
Add to My Group(s)
Go To Commenting
The views expressed herein are the sole responsibility of the author and do not necessarily reflect those of this website or its editors.