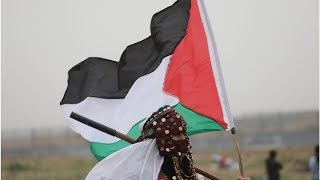 The aims of the Great March of Return protests, which began in Gaza on March 30 last year, are to put an end to the suffocating Israeli siege and implement the right of return for Palestinian refugees who were expelled from their homes and towns in historic Palestine 70 years ago.

But there is much more to the protests than a few demands, especially bearing in mind the high human cost associated with them. According to Gaza's Ministry of Health, more than 250 people have been killed and 6,500 wounded, including children, medics and journalists.

Aside from the disproportionately covered "flaming kites" and youths symbolically cutting through the metal fences that have caged them for many years, the marches have been largely nonviolent. Despite this, Israel has killed and maimed protesters with impunity.

A UN human rights commission of inquiry found last month that Israel may have committed war crimes, resulting in the deaths of 189 Palestinians, within the period March 30 to December 31. The inquiry found "reasonable grounds to believe that Israeli snipers shot at children, medics and journalists, even though they were clearly recognizable as such," the investigators concluded.

Many in the media, however, still do not understand what the Great March of Return really means for Palestinians. A cynically titled report in the Washington Post attempted to offer an answer. The article, "Gazans have paid in blood for a year of protests. Now many wonder what it was for," selectively quoted wounded Palestinians who, supposedly, feel that their sacrifices were in vain. Aside from providing the Israeli military with a platform to blame Hamas for the year-long march, the long report ended with these two quotes: The March of Return "achieved nothing," according to one injured Palestinian. And "the only thing I can find is that it made people pay attention," said another.

If the Washington Post paid attention, it would have realized that the mood among Palestinians is neither cynical nor despairing. The Post should have wondered: If the march had "achieved nothing," then why are Gazans still protesting, and why has the popular and inclusive nature of the march not been compromised?

Sabreen Al-Najjar, the mother of young Palestinian medic Razan, who was fatally shot by the Israeli army while trying to help wounded protesters, wrote in the Independent last week: "The right of return is more than a political position, more than a principle: Wrapped up in it, and reflected in literature and art and music, is the essence of what it means to be Palestinian. It is in our blood."

Indeed, what is the Great March of Return but a people attempting to reclaim their role, and be recognized and heard in the struggle for the liberation of Palestine?

What is largely missing from the discussion on Gaza is the collective psychology behind this kind of mobilization, and why it is essential for hundreds of thousands of besieged people to rediscover their power and understand their true position, not as hapless victims, but as agents of change in their society.

The narrow reading, or the misrepresentation, of the Great March of Return speaks volumes about the overall underestimation of the role of the Palestinian people in their struggle for freedom, justice and national liberation.

The story of Palestine is the story of the Palestinian people, for they are the victims of oppression and the main channel of resistance, starting with the Nakba the creation of Israel on the ruins of Palestinian towns and villages in 1948. Had Palestinians not resisted, their story would have concluded then, and they would have disappeared.

Those who admonish Palestinian resistance or, like the Post, fail to understand the underlying value of popular movement and sacrifices, have little understanding of the psychological ramifications of resistance the sense of collective empowerment and hope that spreads among the people. In his introduction to Frantz Fanon's "The Wretched of the Earth," Jean-Paul Sartre describes resistance, as was passionately vindicated by Fanon, as a process through which "a man is recreating himself."

For 70 years, Palestinians have embarked on that journey of recreation of the self. They have resisted, and their resistance in all of its forms has molded a sense of collective unity, despite the numerous divisions that were erected among the people. The Great March of Return is the latest manifestation of the ongoing Palestinian resistance.

It is obvious that elitist interpretations of Palestine have failed; Oslo proved a worthless exercise in empty cliches, aimed at sustaining American political dominance in Palestine as well as in the rest of the Middle East. The signing of the Oslo I Accord in 1993 shattered the relative cohesiveness of the Palestinian discourse, thus weakening and dividing the Palestinian people.

Related Topic(s): Great Return March; Hamas; Israel; Justice; March For Justice; Palestinian; Palestinian Massacre; Resistance, Add Tags
Add to My Group(s)
Go To Commenting
The views expressed herein are the sole responsibility of the author and do not necessarily reflect those of this website or its editors.