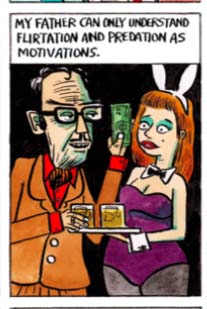 What if you are not just a recovering alcoholic but a thin-skinned artist trying to make a living under the shadow of your famous father? What if your mother is so cold she considers a pat on the back a "hug"? What if, as an insecure artist, you both love and disdain the fickle rush of social media praise?

These are some of the narrative threads that run through the tragi-comedic new graphic novel "Fictional Father" by cartoonist Joe Ollmann (Drawn & Quarterly, ISBN-10: 1770464638).

The novel's protagonist, Caleb Wyatt, is the only child of the creator of a world famous cartoon strip "Sonny Side Up" (think "Peanuts"). People younger than Ollmann may not remember but there was a time when characters in U.S. syndicated cartoon strips like Charlie Brown, Dennis the Menace, Dagwood and Blondie and even Li'l Abner animated American life. What would they do or say next? What calamity would hit them? They were almost like American folk heroes. (Some also remember copying the color figures in the Sunday newspaper "Funnies" onto their mound of Silly Putty.)

The fictional cartoon strip, "Sonny Side Up," has made its creator Jimmi Wyatt and its main character, "Poppy," a cook in a diner such heroes. Poppy so loves his son, "Sonny," that no problem or misadventure can come between them. He has been dubbed "Everybody's Dad" by his many fans.

Related Topic(s): Alcoholic; Alcoholics Anonymous; Alcoholism; Artists; Drug Abuse Alcohol; Family; Father; Fathers Day; LGBT; Money; (more...) Mother; Novel, Add Tags  (less...)
Add to My Group(s)
Go To Commenting
The views expressed herein are the sole responsibility of the author and do not necessarily reflect those of this website or its editors.