Our country is in a deep hole. As usual, Congressman Ron Paul sums up the situation succinctly.

The national debt now stands in excess of $10 trillion, more than $30,000 per person. The total future debt obligations of the United States, including entitlements, are estimated at $59 trillion, which equates to over $500,000 per household. Social Security and Medicare will likely consume the entire federal budget by 2040, threatening the average American with an impossible tax burden. For over 30 years, I have been urging all Americans to educate themselves about monetary policy in order to better understand how a small group of unelected individuals at the Fed and the Treasury Department wield tremendous power over our lives.

The politicians who run this country do not want the general public to know how bad the situation truly is. Therefore, governmental agencies spin all data in the most positive way to keep the masses in the dark. The massive corporations that contribute millions to these politicians, cook their books, take huge risks and then beg for the government to bail them out when their bets blow up. Meanwhile, the average American doesn’t question the information their government and corporations feed them - living a life of self imposed delusion.

There are many people who believe there is a governmental conspiracy to systematically fake the numbers regarding our economy. I do not believe that is true. Our government is the biggest bureaucracy in the world. Bureaucracies are run by bureaucrats that want to retain their positions. These bureaucrats try to please their masters. This leads them to tweak every process trying to “improve” the output. The tweaking always makes the figures slightly more positive. After many years, the continuous positive tweaking of the numbers has led to monthly figures that are at best misleading and at worst completely false. This is why we have such disconnect between the economic figures put out by the government and how people feel about their personal situation.

The number of Americans who believe the country is moving in the wrong direction has risen sharply, to nearly eight in ten, amid soaring food and gas prices, falling home values and unending war. Just 17 percent say the country is going in the right direction, according to an AP-Ipsos poll. The AP announcement of these results hits at the heart of the problem.

The survey reinforces the notion that consumers are particularly gloomy — possibly more than economic statistics justify. Despite record energy costs, slumping stock prices and the housing and credit crunch, reports show the economy to be still growing, if slowly. Inflation and interest rates remain at relatively tame levels. And the unemployment rate is lower than it was during the past two recessions, in 1990 and 2001.

Tom Raum, the AP writer, is unaware that those economic statistics have been positively skewed over time. Therefore, he doesn’t connect the numbers to American’s gloom.

I hear pundits like Larry Kudlow expound on the great American economy. They reference how bad it was in 1980 compared to today. In 1980 inflation was out of control after years of fiscal mismanagement and loose Federal Reserve policies. It took Paul Volker raising rates to almost 20% to kill inflation. When the pundits compare the CPI that is published today to the CPI in the past, it is an apples to oranges comparison. For a true comparison, you must add 7% to whatever the government publishes. If the American public thought that inflation was running at a rate above 11%, there would be an outcry for wage increases above the current 3% average. 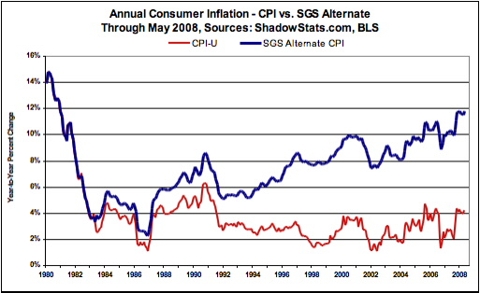 The implications of this discrepancy explain why people don’t feel like they are getting ahead. The average American is paying in excess of 11% for the items they need to buy, while their wages go up by 3% or 4%. No wonder they feel that they are falling behind. They are! The adjustments to CPI over the years have had the effect of reducing social security payments.

John Williams, who has done the groundwork on these adjustments, comes to the conclusion that

...the reporting system increasingly succumbed to pressures from miscreant politicians, who were and are intent upon stealing income from social security recipients, without ever taking the issue of reduced entitlement payments before the public or Congress for approval.

We have Alan Greenspan and Michael Boskin to thank for the most recent “improvement” to the data.

Their adjustments to CPI are best summed up again by John Williams:

The Boskin/Greenspan argument was that when steak got too expensive, the consumer would substitute hamburger for the steak, and that the inflation measure should reflect the costs tied to buying hamburger versus steak, instead of steak versus steak. Of course, replacing hamburger for steak in the calculations would reduce the inflation rate, but it represented the rate of inflation in terms of maintaining a declining standard of living. Cost of living was being replaced by the cost of survival. The old system told you how much you had to increase your income in order to keep buying steak. The new system promised you hamburger, and then dog food, perhaps, after that.