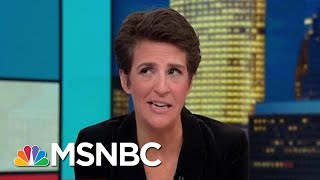 Michael Cohen Contradicts Trump's Excuse For Not Releasing His Taxes | Rachel Maddow | MSNBC Rachel Maddow shares a piece of Michael Cohen's testimony in Congress in which he explains that Donald Trump feared that releasing his taxes publicly would ...
(Image by YouTube, Channel: MSNBC)   Details   DMCA
Beyond horrifying: Rachel Maddow reports exclusively on details of a newly obtained spreadsheet kept by the Trump administration's Office of Refugee Resettlement led by anti-abortion activist Scott Lloyd. The 28-page spreadsheet tracks the pregnancies of unaccompanied minor girls. Girls as young as 12 who were raped and had requested abortions were being effectively blocked from leaving the shelters to obtaining medical care.

Brigitte Amiri, ACLU Reproductive Freedom Project senior staff attorney joins to discuss details of the case. She notes that as of March 30, 2018, the ACLU had won its case and courts had stepped in and required Lloyd to stop preventing these girls from getting medical care. Indications show that he may have used the spreadsheets to keep track of how long the girls needed to be blocked until their pregnancies were so far along that it was no longer legal for them to get an abortion. The dates on the spreadsheets, which includes detailed information on each girls' menstrual cycle and whether the sex that caused the pregnancy was consensual or not, indicates that he continued to gather information even after the court ordered him to stop his interventions. Rachel Maddow has the dark, Nazi-esque scoop.

Related Topic(s): ACLU; Abortion; Abortion Rights; Pregnancy; Rape; Rape Culture, Add Tags
Add to My Group(s)
Go To Commenting
The views expressed herein are the sole responsibility of the author and do not necessarily reflect those of this website or its editors.