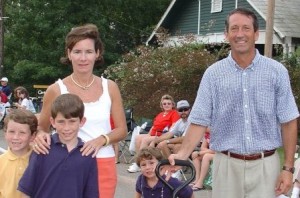 It's not that I leave the planet when I take a week off; it just seems that way. Yeah, there's a television in the living room at the rented beach house. And one in the master bedroom. And the kids' room. And the spare bedroom. You can't get away from them. But . . . we just don't turn the evil goddam things on.

(If the kids start jonesing for a video fix, we put "Wall-E" or "Horton Hears A Who" in the DVD player. And that's usually at night when they're all exhausted from riding their boogie boards in the pounding surf, and washed out from sun and sand and mounds of 'smores. So, they fall asleep in minutes, the sugar overload notwithstanding.)

Unless, of course, we hear through the beach grapevine that, once again, a Republican "family values" freak has got caught with his wee-wee pinched in the zipper of a dress not belonging to his wife. Metaphorically speaking, of course. Then, we only watch for a moment. Just for the comedic aspects. Honest.

And, if possible, I stay away, far away, from newspapers, especially if I can see their headlines silently yelling at me from behind the vending machine's sun-cracked window.

So, once back in the real world, it is unnerving to pick up the accumulated copies of The New York Times and begin the grim slough through page after page of the same ol' same 'ol.

A "church" service in Kentucky where those seated in the pews singing -- one supposes -- "The Old Rugged Cross" have their firearms tucked in their holsters in order to show "God" that they are truly good Christians and deserving of His  blessings and benevolences.

The "no" vote from 212 House members on the Waxman-Markey climate-change bill, a vote that, as Paul Krugman writes today, was a "form of treason - treason against the planet."

Schemes by insurance companies to shortchange -- or drop altogether -- sick patients who dutifully paid their premiums and now, when the insurance is most needed, are denied coverage. All in the name of profit for the companies.

Tricksters in the banking industry who accepted the $75 billion in taxpayer bailouts but now refuse to refinance mortgages owed by people desperate to remain in their homes.

Another successful C.I.A. operation in the "Company's" never-ending fight against freedom, democracy, truth, and justice.

And, gosh, I haven't even looked at the Washington Post yet.

Mike Malloy is a former writer and producer for CNN (1984-87) and CNN-International (2000). His professional experience includes newspaper columnist and editor, writer, rock concert producer and actor. He is the only radio talk show host in America to have received the A.I.R (Achievement in Radio) Award in both (more...)
Related Topic(s): Family; Firearms; God; Newspapers; Paul Krugman; Republican; Television, Add Tags
Add to My Group(s)
Go To Commenting
The views expressed herein are the sole responsibility of the author and do not necessarily reflect those of this website or its editors.